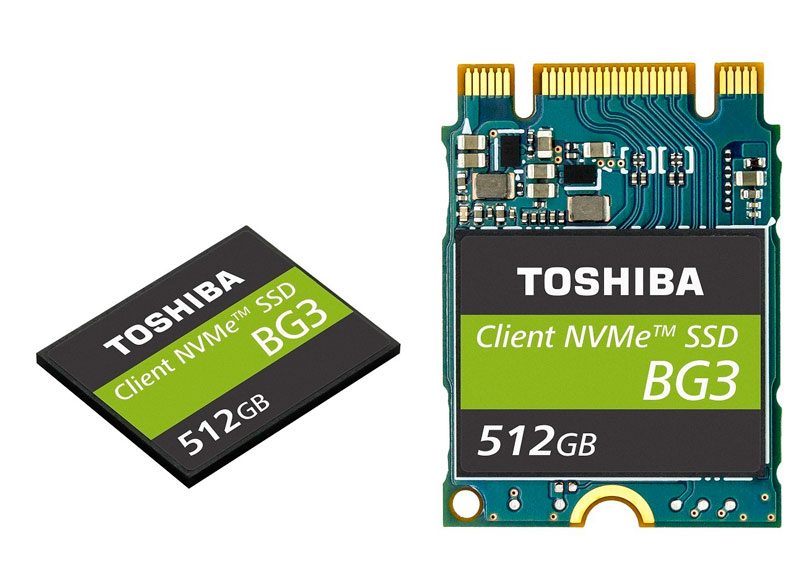 Answering the demand for more compact client drives, Toshiba is announcing the release of the Toshiba BG3. It uses a 2230 form factor meaning it measures 22mm wide and is only 30mm long. At this compact size, the Toshiba BG3 does not have room for much but this is more than enough for their engineers to pack a 64-layer 512GB 3-bit-per-cell TLC BiCS flash. It leverages the Host Memory Buffer feature in NVMe revision 1.2.1 so that it is able to perform at NVMe storage speeds without integrated DRAM. It is also quite thin at only 1.3mm high with low power consumption to match.

The compact SSD uses PCIe Gen3 x2 lanes with up to 1520 MB/s sequential read and 840MB/s sequential write. Which is significantly higher than any SATA M.2 drives. Each drive is available starting with 128GB, 256GB and up to 512GB capacities in the same removable M.2 2230 form factor. It is also available as a surface-mount BGA (M.2 1620) for design flexibility.

The small footprint makes it a fast ideal solution for tablets and laptops. Its fast and economical nature also make them excellent for data center and enterprise applications as server boot storage. Since it is a client SSD, it will not be available in normal retail channels like a regular NVMe SSD would. It will however, make its way through several OEM products soon.