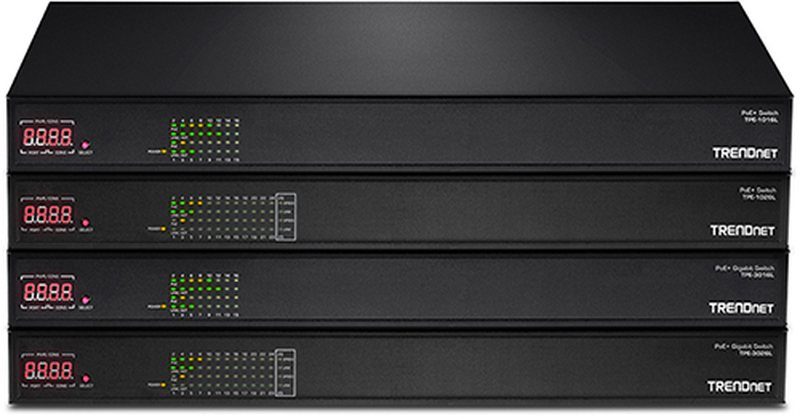 TRENDnet showcased their latest SMB switches during CEDIA 2016 and the AV series as they are called look like they could be some solid choices – but if you were looking to upgrade to 10GbE powered ones, then you’ll have to look other places. That said, these SMB switches still provide some great specs and switching capabilities for their intended usage area.

The new AV switches are ideally suited for use with a variety of audiovisual applications and devices, hence the AV series name. TRENDnet’s AV Series Switches are conveniently compatible with a wide range of audio and video equipment such as video encoders and decoders, IP surveillance cameras, audio distribution systems, and wireless access points. Common applications include use in restaurants and sports bars, home theater systems, TV and radio broadcast, corporate campuses, and universities.

The series consists of four new switches ranging from 16 ports to 26 ports, all designed for rack usage with rear-facing ports and front-facing display to improve cable management and easy monitoring. The front-facing LED displays allow for a quick and easy view of the PoE power total, power remaining, and power consumed per port.

Moving down in ports and speed and we get to the TRENDnet TPE-1026L which is a 24-port 100Mbps switch. It features 24 x PoE+ Ethernet ports and two Gigabit SFP shared ports with a total switching capability of 8.8Gbps and an MSRP of $589.99.

The last two units both come with 16 ports. The first of them is the TRENDnet TPE-3016L which is a 16-port Gigabit Ethernet switch with 220W. It features 16 Gigabit Ethernet PoE+ ports and a total switching capability of 32Gbps. This one comes with a fan-less design which reduces power consumption and operating noise. It also increases the location options for the placement as you don’t need to worry about the sound. This unit comes with a $539.99 MSRP.