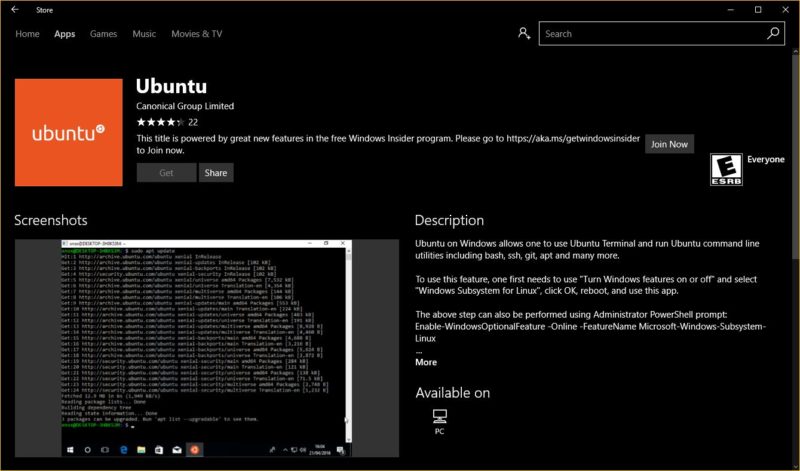 As a giant company with the most dominant operating system in history, it is easy to believe that Microsoft wants to shut out their competitors. That is why everyone was in shock during the Build 2016 conference, when they made the Bash shell support announcement. It was difficult to imagine: the entire Linux command line system on Windows 10. Microsoft and Linux working harmoniously. Microsoft even further extended support to SUSE and Fedora distributions. For this to happen, Microsoft had to rely on Ubuntu Maker Canonical to ensure the performance is as smooth as it could be. Now, the fruits of that project are finally available for download, directly via the Windows 10 store.

The sandbox Linux environment shares the hardware and files alongside Windows 10 operating system. More importantly, users can run Linux command line utilities without having to partition the drive and dual-boot. Ubuntu is the first release, and it is available via the store. Although SUSE and Fedora are soon to follow. Since various distributions are available, users can also run them more than one at a time if needed.

Although downloading Ubuntu within Windows 10 is simple, users have to take a few extra steps before installing. First, they must enable the “Windows Subsystem for Linux” under “Turn Windows features on or off” section of the Control Panel. It goes without saying, but this also requires the latest Windows 10 updates installed version 16190.0 or higher. This is only via the Windows Insider program for now. It also requires X64 architecture.  The download size itself is moderately small at only 192.6MB