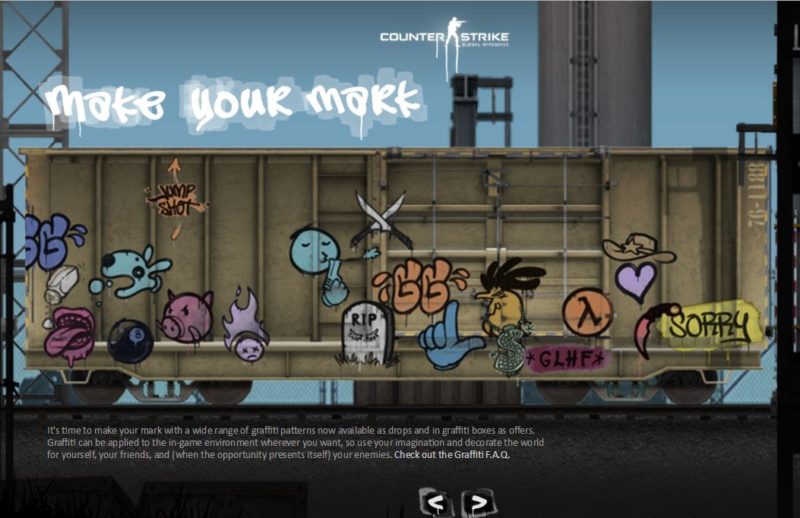 As part of the recent patch to popular title CS:GO, Valve finally brought in a long-awaited feature. At long last, CS:GO will have sprays and graffiti implemented. This brings back a feature that CS:Source and 1.6 as well other Valve titles have had in the past. CS:GO actually didn’t have this feature at launch so it is a most welcome feature.Unfortunately,Valve has decided to monetize the spray mechanic in CS:GO.

The way Valve has gone about implementing the feature has become controversial, to say the least. In previous titles, sprays could be one of a dozen or so in-game images as well as any image file a user would upload. With CS:GO, sprays are limited to in-game drops or purchased outright. Even more egregiously, they are limited to 50 uses each, meaning you would have to shell out once you’ve used them up. It is disappointing they’ve has chosen to monetize such a long-standing feature.

Furthermore, there are also various implementation problems with the sprays in CS:GO. In previous Valve titles, sprays were limited to certain surfaces but this restriction no longer applies. This means they can be applied to windows and exploited by players due to their quirky transparency characteristics. Sprays can also be used to change the look of the map, leading to issues in competitive play.

Hopefully, Valve will move quickly to address the glaring issues with their implementation. For starters, sprays should not be limited use and users should regain the ability to upload their own images to share. For competitive play, perhaps it would be better if sprays were prohibited altogether, a necessary sacrifice to ensure a balanced playing field. In an age where every customization is getting monetized, Valve could set an example and stick to their old principles by placing control back with the user.