Is Steam Growing or Shrinking?

While Valve releases their monthly hardware and software survey data, they do not really have a yearly informal data review.

However, the Steamworks Development team felt compelled this time to show that Steam is still growing as a platform. Most likely to show the likes of EPIC Games that Steam is still the king and it will take a lot of effort to dethrone them from the top. Furthermore according to Valve, they will also be releasing these yearly informal reports regularly from now on. 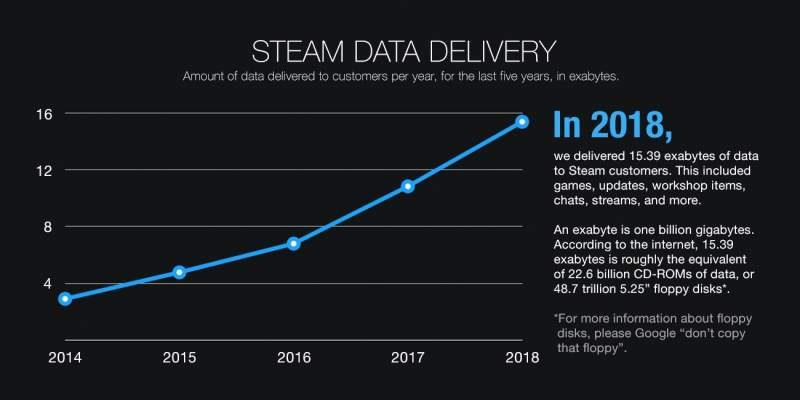 So how well is Steam actually doing? According to the report, the platform actually delivered more data this year than before. Significantly so. How Much? In 2018 alone, 15.39 exabytes of data were delivered to Steam customers. This includes game downloads, updates, workshop items, chat and all other services which require bandwidth.

To put that in perspective, an exabyte is one billion gigabytes. Furthermore, this is a huge increase from just over ~10 exabytes of data from 2017. Which in turn is a big leap from just ~7 exabytes of data from 2016. Not only are there more users, more people are also playing and downloading games. Obviously, having large game sizes also contribute to this high number. 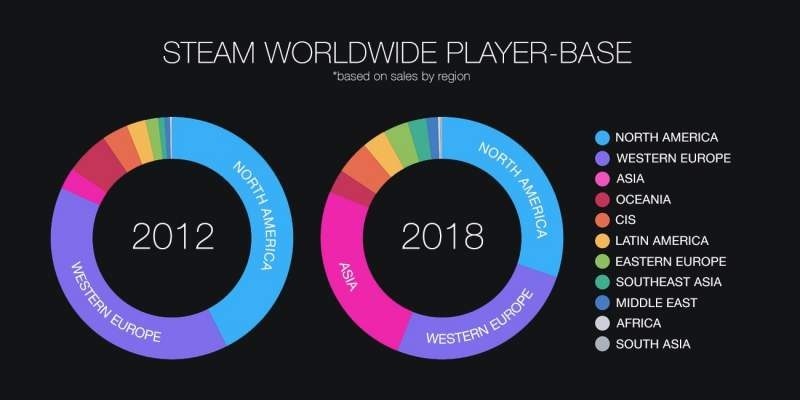 For the most part, North America and Western Europe still populate the majority of the user base. However, Asia has jumped significantly from 2012 to 2018. Buoyed by users from mainland China. Growth in Eastern Europe, South East Asia and the Middle East has also been quite significant.

It also helps that Steam has added support for over 100 different payment methods and now accepts 45 different currencies. The Steam client also has expanded support for languages, now with a total of 26 localized versions.

What Does the Future Hold for Steam?

Furthermore, Steam is also partnering with Perfect World to bring Steam onshore into China officially. This has actually been in the works since spring last year, but Valve has been ironing out details of the launch since they have to comply with plenty of local laws. For a market as big as China, it is understandable that Valve has been taking it slow and steady.

In conjunction with these changes, a New Events system and a new Steam PC Cafe Program will also be launching.

For more details, read up on the official Steam year in review blog post through this link.