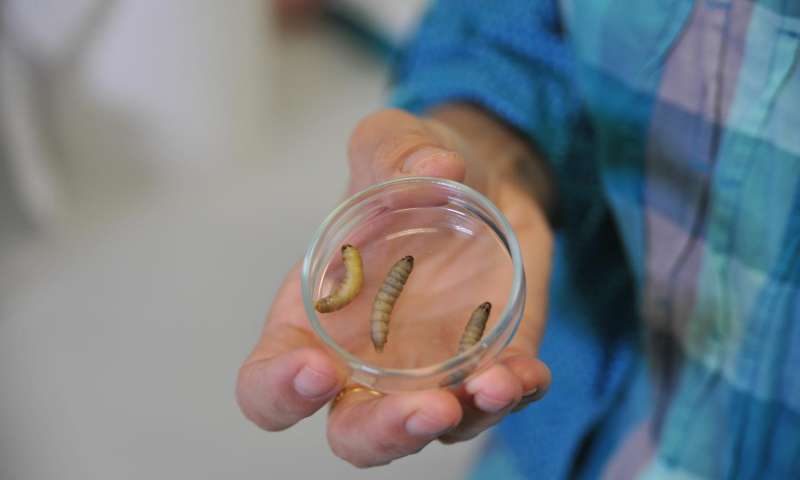 The wax worm catterpillar, the larvae of the common insect Galleria mellonella is commercially bred as fishing bait. It is also a scourge in Europe, living as parasites inside beehive colonies. A recent chance discovery however, has changed how scientists view these humble creatures. An amateur beekeeper from the Institute of Biomedicine and Biotechnology of Cantabria (CSIC), Spain named Federica Bertocchini made the discovery while she was removing the wax worm from her honeycomb hives. She placed the creatures temporarily inside a typical shopping bag and noticed that it became riddled with holes. She then collaborated with her colleagues Paolo Bombelli and Christopher Howe at the University of Cambridge’s Department of Biochemistry to conduct an experiment.

In their research, they have found holes appearing in plastic supermarket bags within just 40 minutes and after 12 hours, the plastic mass was reduced by as much as 92 mg. The calculated rate of biodgredation using wax worms is even faster than the plastic-eating bacteria announced last year which had a rate of 0.13 mg a day.

“We are planning to implement this finding into a viable way to get rid of plastic waste, working towards a solution to save our oceans, rivers, and all the environment from the unavoidable consequences of plastic accumulation,” said Dr Bertocchini. “However, we should not feel justified to dump polyethylene deliberately in our environment just because we now know how to bio-degrade it.”  The researchers have applied for patents to the discovery and will be conducting more research to pin-point the chemical secrets involved in the natural degradation of plastic.