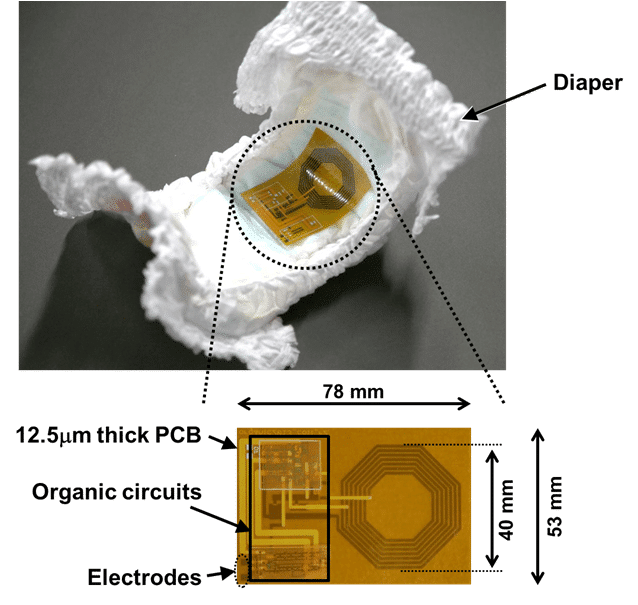 We have smart phones to make our lives easier, but could we soon be seeing smart diapers? The premise behind this idea from Takao Someya and a team of researchers from the University of Tokyo is that when your child is in another room or going down for a nap a text will be sent to your phone saying that the babies diaper will need to be changed. The idea for this technology comes from the same team at the University of Tokyo where last year they announced that they have designed flexible circuits which are thinner than a piece of plastic wrap, with the original idea being to implant them in the body to monitor blood pressure and body temperature or as a touch pad to be implanted on the roof of the mouth for quadriplegics.

Now it seems the team from the University of Tokyo has found another use for the smart flexible circuits, by creating a disposable organic sensor that can be embedded into a diaper. The senor which will respond to changes in electrical resistance such as pressure, temperature and of course wetness is made from film and inkjet technology. When this device embedded in the diaper senses that it needs to be changed it sends a signal to the external data-reading device.

The data-reading device needs to be at least a couple of inches away from the inkjet printed film to work, however Takao Someya and his team are investigating ways to boost the distance of the signal so close up monitoring of the film will not be needed. The device will also be aimed at being installed into adult diapers, eliminating the need of undressing patients to see if they need changing.

Thank you CNET for the information provided