Since the launch of Western Digital’s single bay My Cloud NAS and its bigger brother the four by EX4 is we have seen a strong movement over to cloud-based storage and thought of doing so less daunting. The latest addition to my cloud family comes in the form of a 2-bay system, offering both the benefit of a multi drive setup with the option for data redundancy along with a simple clean design and a small desktop footprint.

Like the other two systems in the cloud family EX2 is optimised from Western Digital’s own red NAS drives and the particulars system that we have today to look at comprises of two 4TB drives giving us a total of 8 TB of storage in RAID0 mode, although out-of-the-box system is configured in RAID1 leaving 4 TB of space to work with. Like the EX for the EX two comes in a number of different capacities including 4, 6 and 8TB models, along with a disk-less option for those who want the flexibility to install their own drives.

At the heart of the EX2 we are given a Marvell Armada 370 single core 1.2 GHz processor, along with 512 MB DDR3 memory, two SATA 6Gbps interfaces, a single Gigabit Ethernet port and two USB three ports. On the software management side we are given the same interface as seen on the my cloud and the EX four along with the same mobile application as previously seen.

with the EX two following in the footsteps of the older MyBook Live in respect to its design, it is suitable for both the consumer and prosumer environment giving the functionality to access our files on the go along with data redundancy, which for some of us is more critical these days and prices starting at around £160 or $190 US. 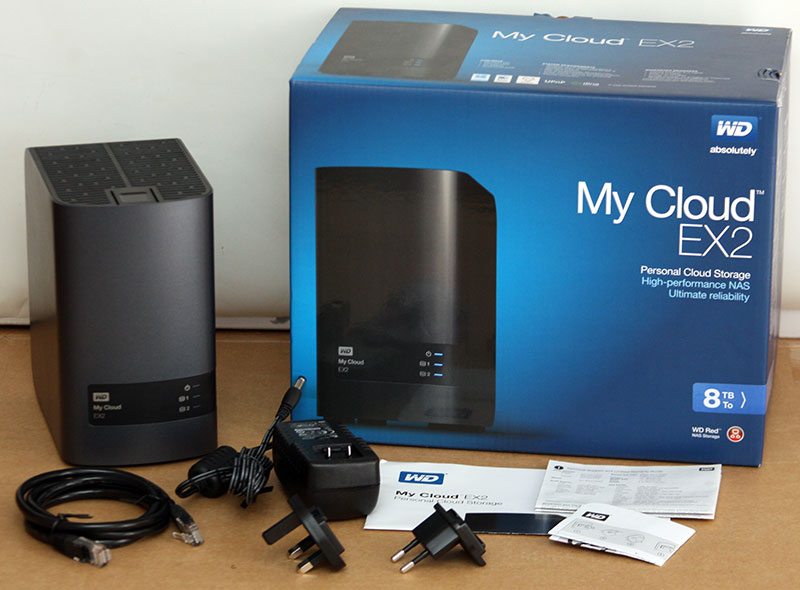 Inside the blue box which we have come to associate with Western Digital’s My Cloud products and alongside the NAS, we have a single Ethernet cable, DC power adapter with UK and EU tips (regional) and a few bits paperwork with warranty and quick setup information.