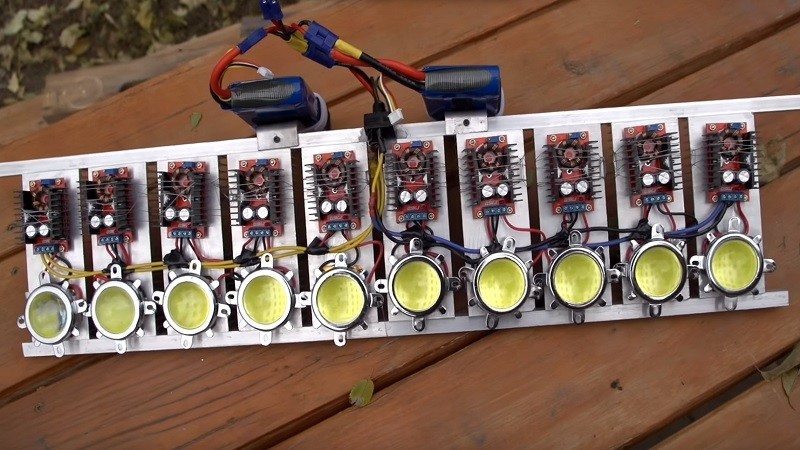 Flashlights come in different shapes, sizes and with different power outputs, but even the most powerful commercial flashlights pale in comparison to this blinding contraption that was put together by a YouTube user named “rctestflight.” Touted as the world’s brightest DIY flashlight, this thing flaunts ten separate 100-watt LEDs that were mounted individually on a large heatsink. The device weighs about ten pounds and is powered by a pair of 8 amp-hour lithium-polymer batteries that give off about the same juice as 9 iPhone 6S batteries. The flashlight can run for about 10 minutes, but since its cooling system is entirely passive, things tend to get hot very fast.

By far the most impressive thing about this flashlight is that it is able to put out no less than 90,000 lumens. To put things into perspective, the Sun provides a luminance of approximately 98,000 lumens per square meter, so it’s definitely not a stretch to say that this contraption can turn night into day. Furthermore, some of the most powerful Maglites only give off 700 lumens, which doesn’t seem so impressive now. If you want to see the world’s brightest DIY flashlight in action, you should definitely have a look at the video below.