The Zoostorm EVOLVE is available in a number of different colours which vary depending on the specification. While this isn’t confirmed, I’m hoping Zoostorm allows users the opportunity to select their favourite colour regardless of the specification. This would greatly enhance the range’s flexibility and ensure buyers can enjoy a build which meets their aesthetic preference. Despite being a cheap and cheerful home office system, the case is solid and doesn’t suffer from any monumental design flaws.

Granted, the silver interior looks quite dated, but this shouldn’t be a cause for concern because the chassis’ internal layout is hidden by two non-windowed side panels. Attaching the side panels is a painless process and I couldn’t detect any rough edges or misaligned mounting points. Honestly, I’ve encountered cases with a poorer build quality and more suspect styling which have a higher retail price. Therefore, the build is more than ample for those requiring a system with rudimentary tasks in mind. 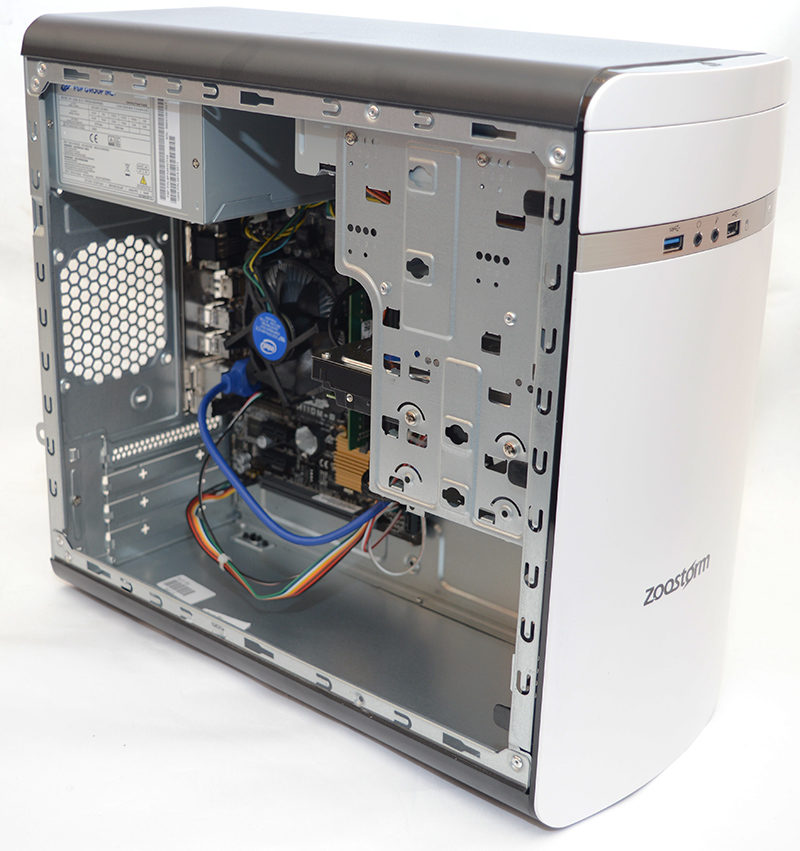 The chassis’ white finish is susceptible to accumulating dust despite employing a matte coating. This is always the case with hardware sporting a white hue and the neutral colour can attract grime or even become temporarily discoloured if someone has dirty hands. As you can see, the case incorporates one USB 3.0 port, a headphone jack, microphone jack, HDD status indicator, USB 2.0 port and an eject button for the stealth optical drive. I’ve always been fond of hiding optical drives via a stealth bay and believe it creates a more streamlined and elegant appearance.

This is particularly true with the Zoostorm EVOLVE as the black optical drive might have detracted from the level of synergy in the front section. Towards the top, there’s also a power button which feels quite responsive. While this is a good arrangement, it would be beneficial to include a reset button to quickly reboot the system just in case you encounter stability problems. 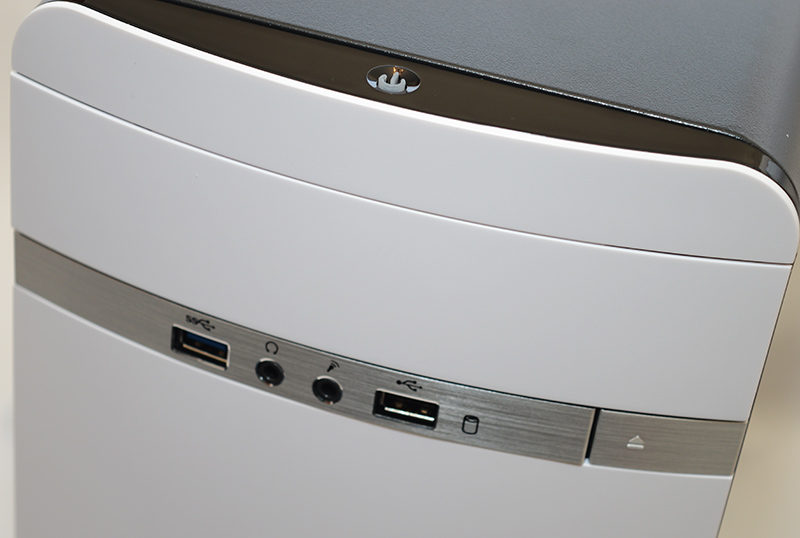 The chassis can accommodate a relatively large fan in the rear and it seems a little strange that this hasn’t been taken advantage of. While the stock cooling is adequate for the system’s target market, installing a chassis fan might have reduced the strain on the tiny heatsink. Also, adding a decent fan wouldn’t dramatically alter the system’s bill of materials and make the build look more complete. Of course, one might argue that the extra fan would increase the noise output, so it all depends on your own perspective. Thankfully, my initial fears were later debunked after viewing the system’s thermals during stress testing. 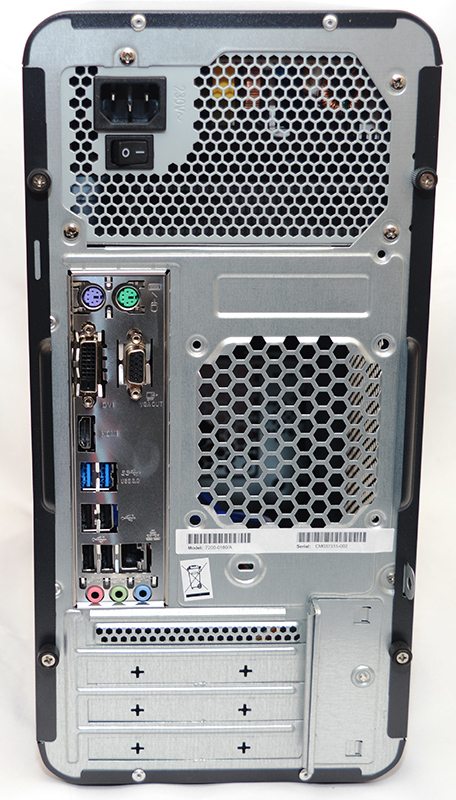 Zoostorm have utilised a 250-watt power supply from the respected manufacturer, FSP Group Inc. According to my research, the PSU has an efficiency rating of 82%, active PFC and quiet 120mm fan. This makes it qualify as a bronze rated power supply and the unit should be extremely reliable for simple tasks. Of course, it’s not designed to cope with a discrete graphics card being added at a later date as demonstrated by the low wattage. Saying that, 250-watts provides a good amount of headroom for the dual-core CPU and other efficient components. 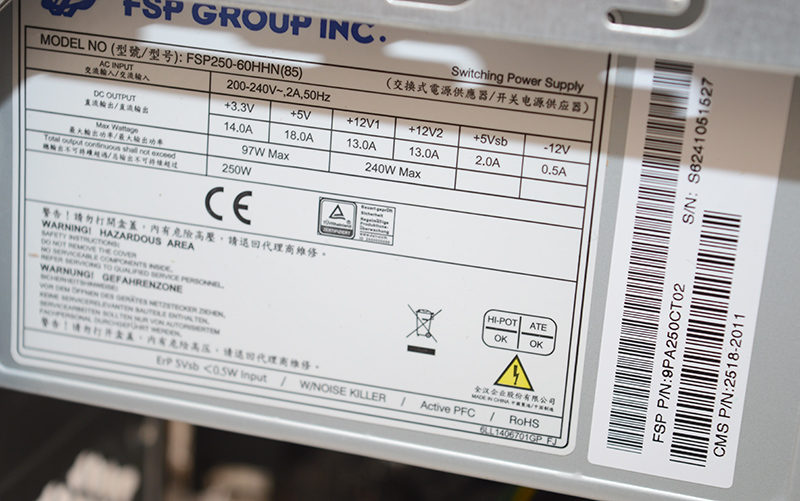 The power supply’s non-modular design and chassis’ old-school cabling means it’s quite challenging to route individual cables in a clean and efficient manner. To be fair, the end-user isn’t going to see the internal cabling which makes it less of an issue. Zoostorm coupled the front cables together using a tight zip-tie and ensured the wiring didn’t surround the CPU cooler or motherboard. On another note, the USB 3.0 cable has a stable run to the correct header and shouldn’t come loose even if you move the system while adopting a heavy approach. While the cabling looks quite messy, it’s unavoidable due to the power supply’s top positioning. 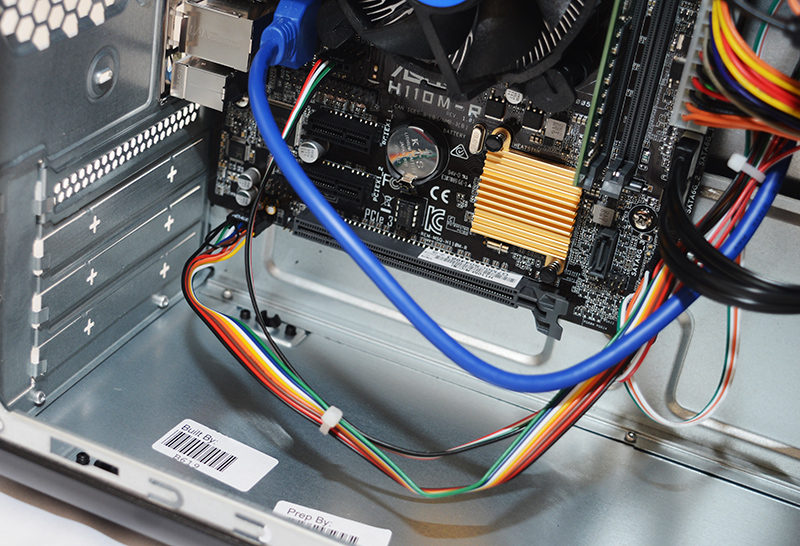 From a wide angle, we can see the excess Molex connectors and other trailing cables have been hidden pretty well around the optical bay. Once again, Zoostorm deployed a number of zip-ties to attain a tidier finish. Please note, the lack of rubber grommets and cable management holes inhibits the cabling by a significant amount. Interestingly, the chassis has loads of underused space near the front section which seems a little wasteful. Even though it’s not suitable for cabling due to the top mounting mount, it suggests the build could have been downscaled in a smaller chassis. 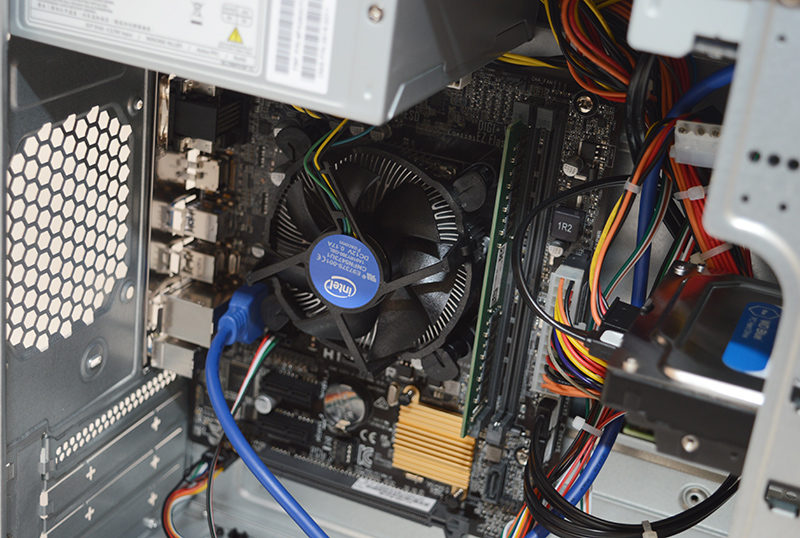 The motherboard houses two DIMM slots capable of supporting up to 32GB RAM at a maximum speed of 2133MHz. In this particular creation, Zoostorm decided to include an 8GB module running at the full 2133MHz frequency. Unfortunately, the single stick results in lower memory bandwidth as the system cannot properly harness a dual-channel setup. On the other hand, the single DIMM solution offers an easy update path and the single-channel memory won’t dramatically alter the desktop experience when browsing the web or writing documents. 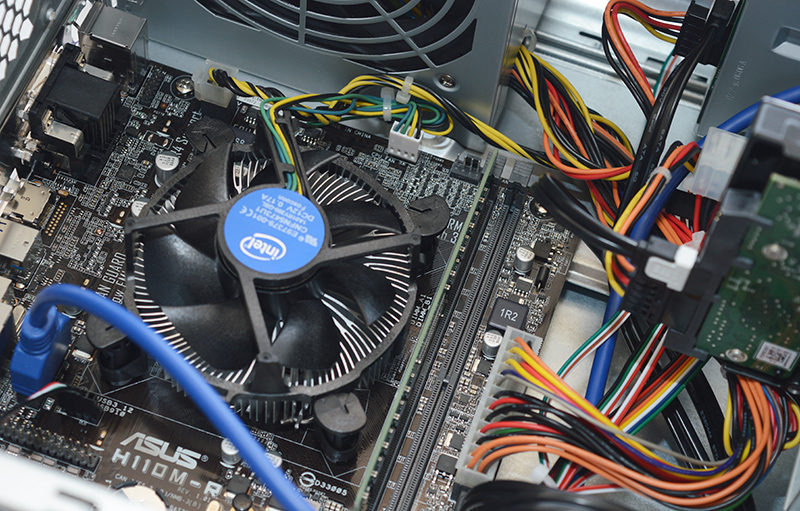 Rather impressively, the CPU fan cable has been expertly tied down using multiple zip-ties. This finish is exemplary and there’s enough clearance to the power supply so that the blades won’t brush against the cabling and make a rattling noise. Also, the power connector’s routeing is very clean and revolves around a logical, minimalistic cabling run. 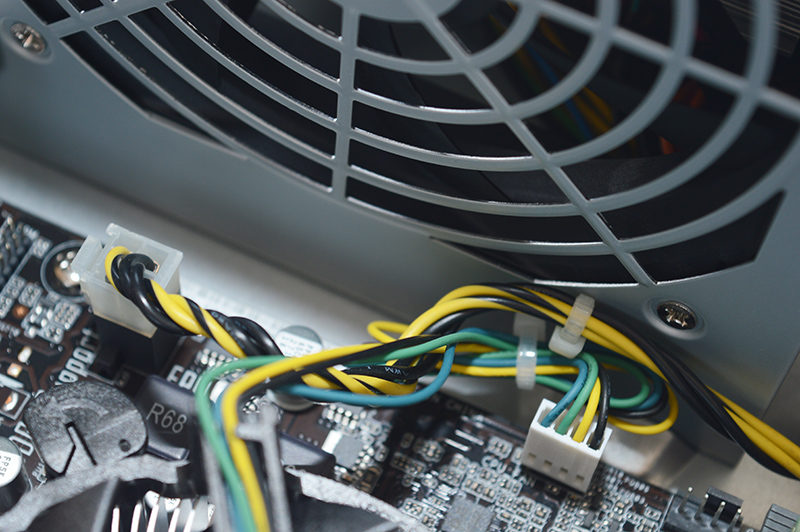 The SATA cables and 24-pin ATX are securely attached to the appropriate connectors without any gaps which could cause a power loss or a drive from disappearing. Furthermore, the cabling is quite straight and the CPU’s push pins properly pierce through the motherboard’s mounting holes. 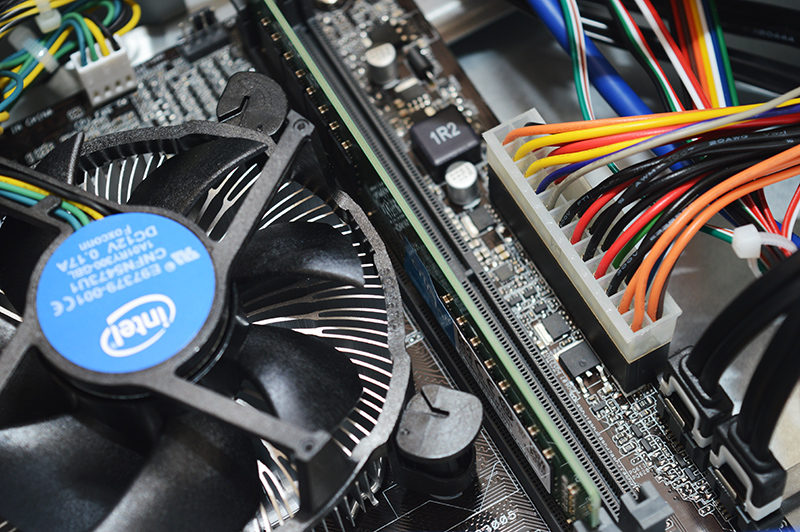