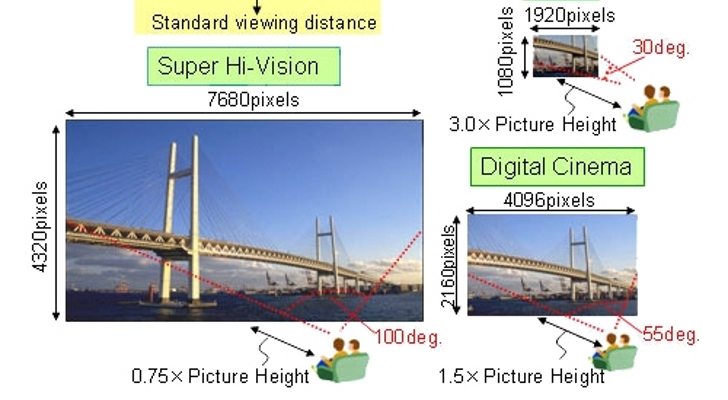 Sony, Samsung, LG and many other electronic giants have been investing in 3D technology for quite some time now and it’s safe to say they’ve made some great advances too, with the technology for 1080p 3DTV coming down in price almost every month and the technology used to capture and broadcast such content has seen massive improvements too, but there is a catch, resolutions are quickly on the rise at the moment and were on the brink of a superHD revolution, and with it comes a whole new set of problems for 3DTV.

4K Ultra High Defenition TV is the current consumer flagship and while there are little to no movies really in the format at this time, the tide is turning and its slowly becoming the enthusiast weapon of choice, so long as you have a spare £10,000 – £15,000 to get decent enough equipment to enjoy it and that’s before you buy surround sound, a movie and the popcorn! Yikes.

The Japan Broadcasting Corp (NHK, Nippon Hoso Kyokai) are the leading voice on 8K video and while they say that 8K is the last hurdle for 2D tech, they say the battle for the ultimate 3D resolution is just beginning.

“One of the main reasons we carried out research into 8K TV is due to the characteristics of human perception. Our conclusion is that 8K will be the final two-dimensional television format. The resolution involved is the highest that the human eye can process. Any further developments will be in 3D,” said Kimio Hamasaki of NHK to The Hollywood Reporter.

4K may offer sharper images that can melt your brain with awe, I know, I’ve seen 4K, but 8K just boggles the mind and the demos we saw at CES 2013 are beyond description, but 8K is as high as a sub 220″ TV ever needs to be, even high end cinema screens only run on 4K!

HNK didn’t bother with 3D, they’ve got their eyes on the future and for them stereo 3D just didn’t cut it. They’re already developing the next-gen of 3D and I wouldn’t hold out for it any time soon either, given that they’ve been developing 8K video since 2005 and the technology has only spawned a handful of capable displays at this time, and content is even more scarce than that. True stereoscopic 3D technology that will truly deceive our eyes and brains will require resolutions that are simply impossible to display at this time.

“The current stereoscopic 3D format just provides a different image to the left and right eye to create a 3D image in the brain. The integral photographic 3D that we are researching creates actual spatial images in front of the screen. Integral 3-D requires a lot of pixels. Super Hi-Vision needs about 33 million pixels, and integral 3D will take 10 to 100 times as many as that,” said Mr. Hamasaki.