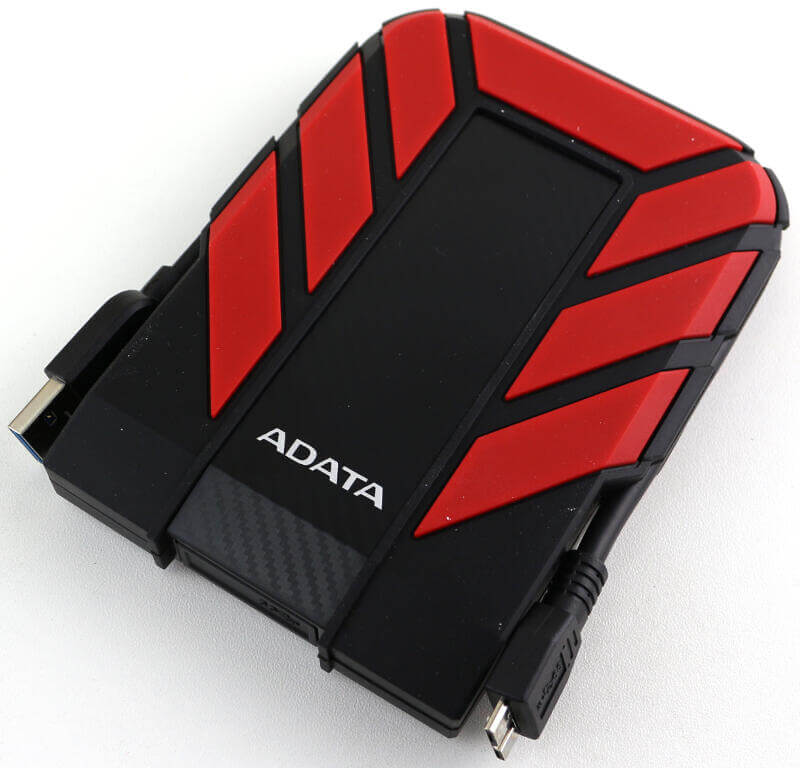 Today we’re taking a look at another portable hard disk, this time from ADATA. The HD710 Pro (product link) is a solid piece of equipment for the active person on the go. It doesn’t really matter what you’re up to, you can bring all your data along and make sure that they are kept safe on your travels. There are two different physical sizes in the HD710 Pro and it depends on the capacity choice. The smallest version is the 1TB drive, the one I’m testing today, while the larger 2TB, 3TB, 4TB, and 5TB take up a little more space.

I have a red drive in the office today, but that’s not the only colour choice that you have. There are four to pick from: Black, Blue, Red, and Yellow.

ADATA’s HD710 Pro is without a doubt a drive that can be categorised as an all-terrain drive. It comes with a protection rating that exceeds the requirements of the IP68 standard. The full protection is achieved when the USB connector port is sealed, that’s a given but still worth mentioning.

The HD710 Pro has been ruggedly tested and it can withstand being submerged in 2 meters of water for 60 minutes. That’s more than the official rating given by the IPX8 rating. Dust and dirt isn’t a problem for the HD710 Pro either with an IP6X rating. There should be no ingress of dust when the USB port is covered.

ADATA didn’t stop there, they also added a military-grade drop protection to the drive. Thanks to the triple-layer construction, the drive will stand up to the US Army MIL-STD-810G 516.6. That means that it will easily take falls from a height of 1.5 meters. 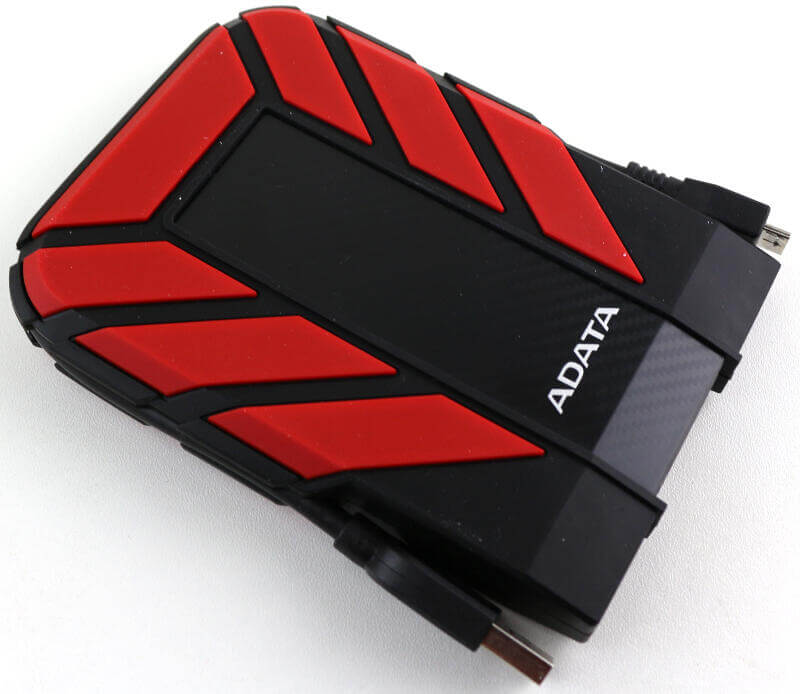 The reason that ADATA’s HD710 Pro has the above-mentioned protection is thanks to the triple-layered construction. From tough silicone on the outside to a shock absorbing buffer, it has it all. The tough plastic shell that is closest to the drive itself will also hold it firmly in place. That in itself isn’t new, but that doesn’t take anything away from its protection and usefulness. ADATA also went a step further and added a G-Shock sensor. 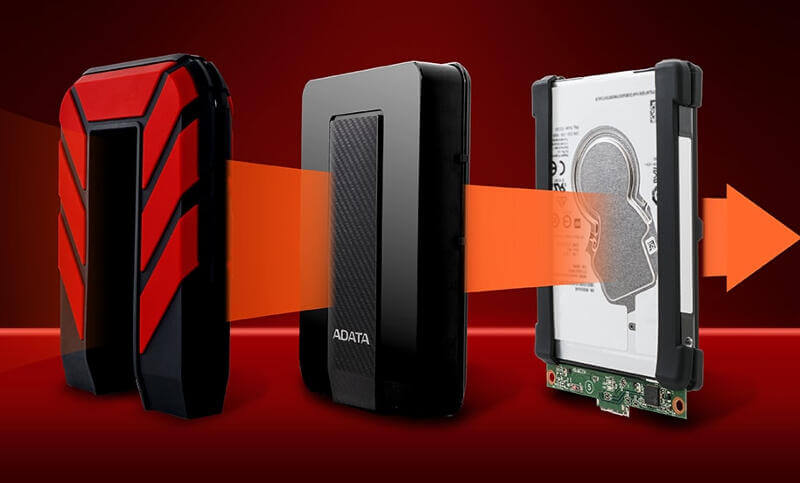 Many portable drives stop at the physical protection, but that isn’t enough for ADATA. The G-Shock sensor built into the drive adds another layer of protection.

The HD710 Pro’s Shock sensors will immediately stop all drive activity if a shock is detected. Once the vibrations have come to an end, the drive activity resumes. Other lesser drives will continue to operate in such conditions which can lead to read-head or surface damage within the drive.

The built-in LED will keep you informed when it happens. It will flash red when the shock sensor detects something. 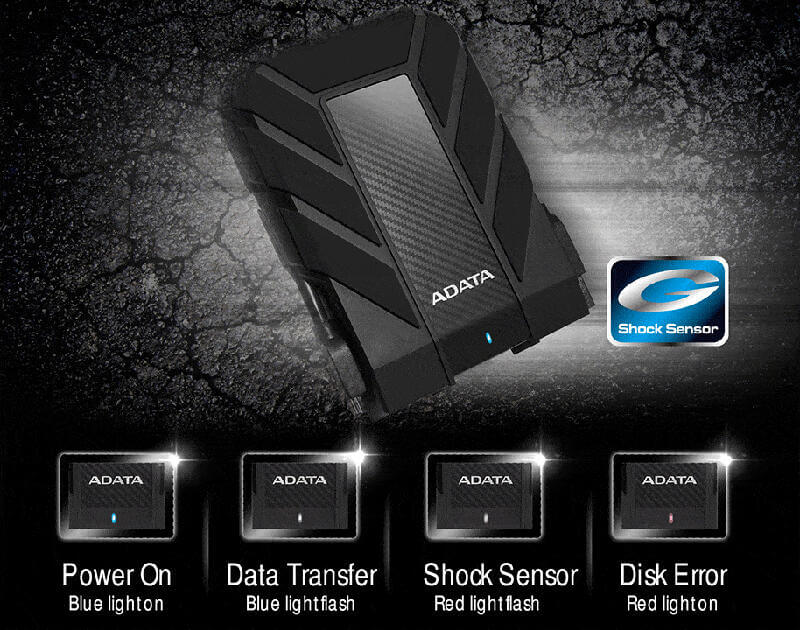 The drive is a USB 3.1 Gen.1 (USB 3.0) drive with Type-B to Type-A cable included. The nifty groove that goes around the shell is a convenient storage for the detachable cable. When you don’t use the drive, simply wrap the cable around the drive and you’re ready to go. That isn’t just useful, it also reduces the risk of annoying cable misplacement.

The HD710 Pro is also backward compatible with USB 2.0, but it requires a not-included Y-cable for dual-host connection. At least for the 2TB and higher versions. That is due to the power consumption of such drives and the fact that it doesn’t use a dedicated external power supply. USB 2.0 is simply not able to deliver enough power through a single port. 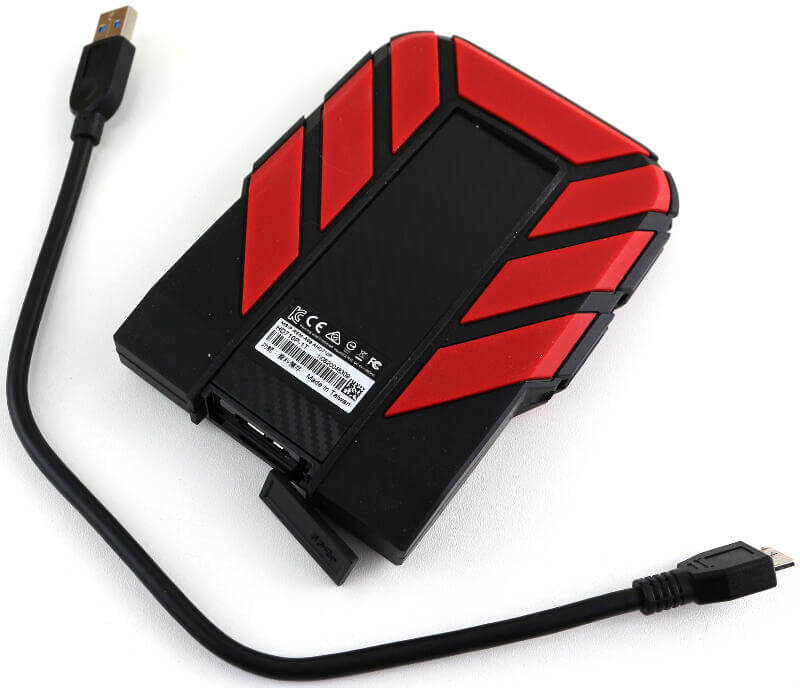 Physical Size and Weight of the Drive

A portable drive is naturally a little bit bigger than an internal drive, but not a lot. At least not in this case. The length and width are the same for all versions with 133.3 by 98.5 mm. The height variates depending on the capacity choice. The smallest 1TB drive is only 21.5mm thick while the larger capacity options come in at 26.7mm. The drive isn’t heavy as such either. The 1TB version weighs 270g while the larger 2TB, 3TB,4TB and 5TB drives weigh 390g. 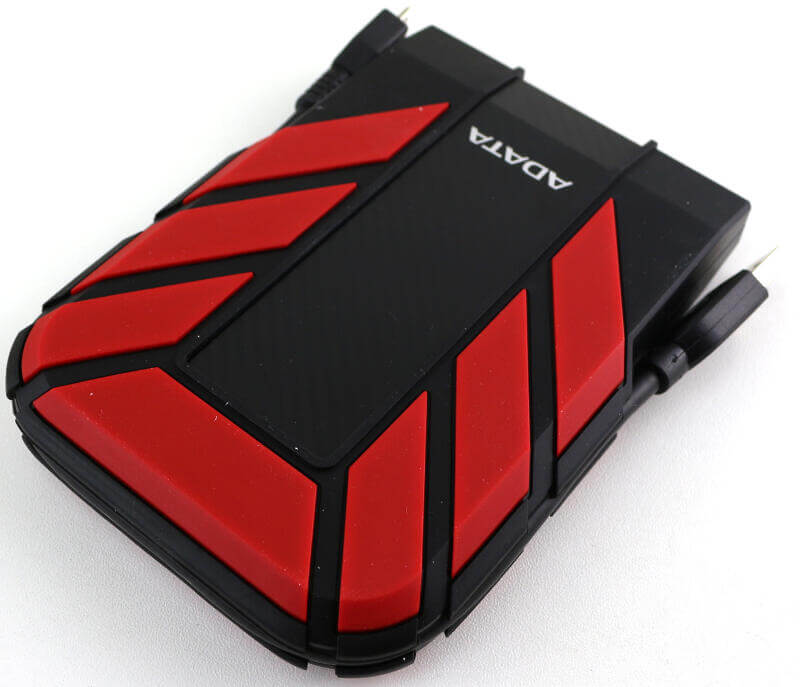 You might have noticed that I haven’t mentioned the performance anywhere up until now, and there is a reason for that. The drive doesn’t have an official speed rating anywhere which I can tell you. But that isn’t bad as that’s one of the things I do in these reviews: test the performance. In a way, it’s nice for me as the reviewer. I don’t have to prove or disprove a rating, I get to find it myself.

ADATA has two pieces of bonus software which work with the drive and are free to download: OStoGO and HDDtoGO. OStoGO is the simplest of the two and it allows you to turn your Windows installation DVD into a USB installation. That isn’t new and there are a lot of apps that can do that, but it’s always nice to have. I’m sure that there are quite a few people out there who have found it useful.

The second piece of software, HDDtoGO, is a little more advanced. It allows you to easily transfer files to and from your systems. The features include No-Trace browsing for Internet Explorer and Firefox, Desktop, Documents, and folder synchronisation, and data compression. Data protection is also included with 256-bit AES encryption. Even favourites and emails can be synced through the HDDtoGO app.

The drive comes in a small box which displays they included drive through the front. That way, there’s no doubt what colour of the drive is included. Other vital information such as capacity, product name, and feature highlights are displayed on the front too. That includes the military-grade shockproof feature as well as the IP68 water and dustproof features. 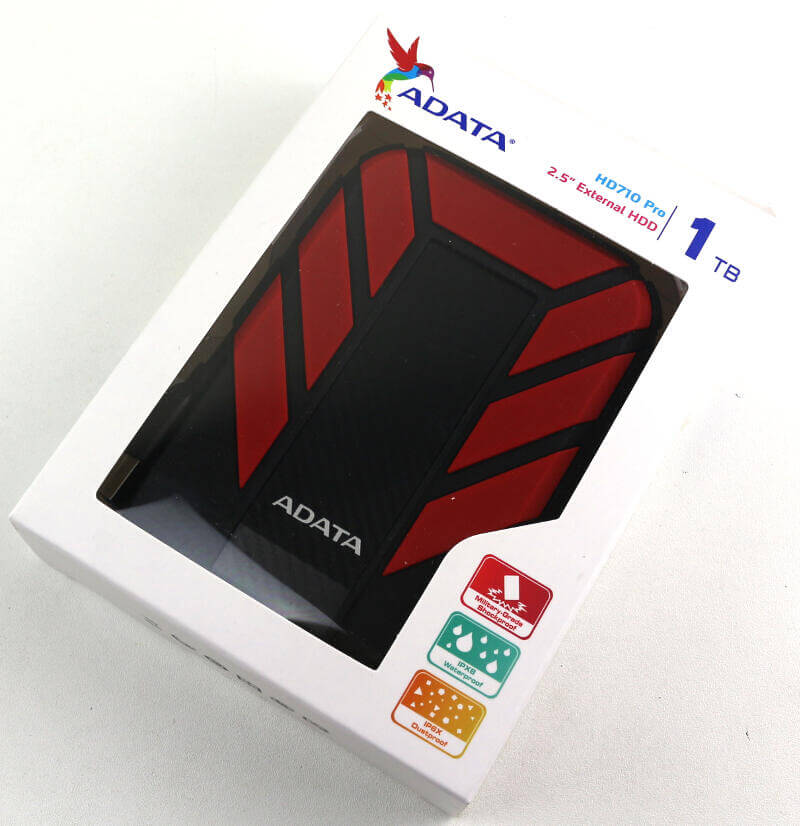 On the rear side you get more details in various languages. 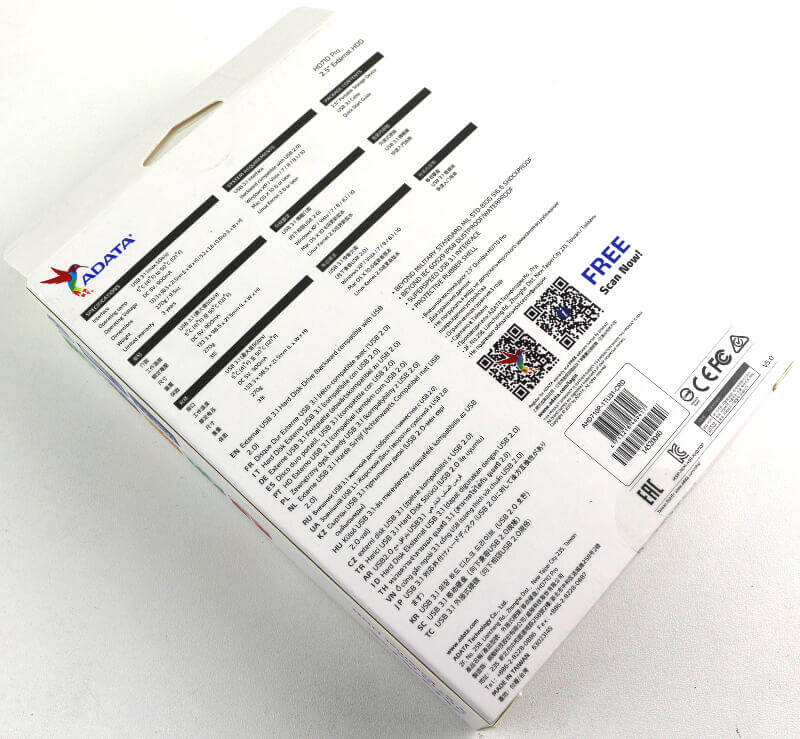 Inside the box is the drive itself, with the connector cable wrapped around it, and a quick-start guide should you need it. 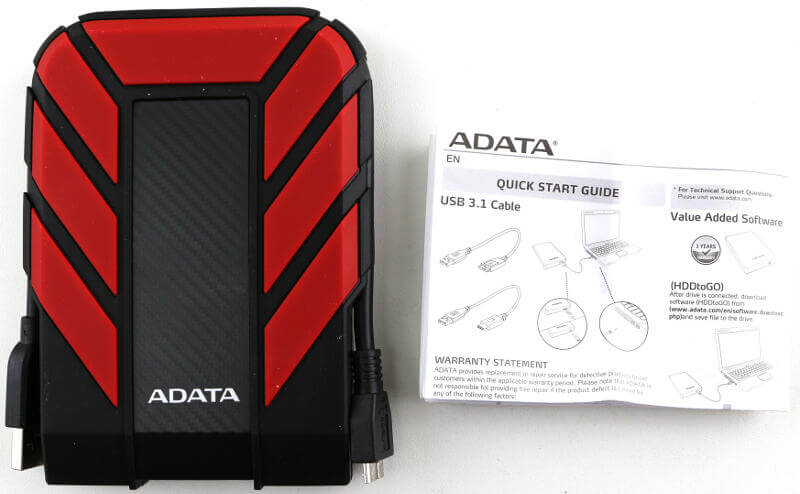