The only thing better than technology is technology at a reduced price. In what is likely a move to combat Intels G3258 budget CPU, AMD has cut the MSRP on a lot of APUs and you can save up to 30 percent on some models.

There seems to have been a slight mistake in AMD’s announcement as the A8-7600 only features 6 GPU cores and not 8 as the image portraits, but that’s just a cosmetic error here and doesn’t affect the news on price reductions.

In one way, this seems like a weird move as they enter the AM1 price-territory. On the other hand, the two chips target different market segments so there might not be any conflict. 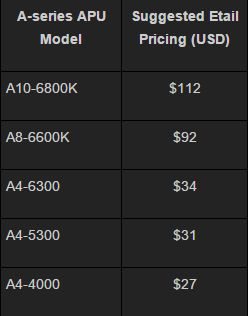 And there is more, as added bonus AMD will be providing customers of the A10 APUs with one free game chosen from Murdered, Thief and Sniper Elite 3. If you don’t want any of those games you can get Corel’s Aftershot Pro 2 software instead, but you’ll have to pay a tiny $5 on top of the coupon to get this program. The code will be placed inside the box and be offered for a limited time.

Thanks to GamersNexus for providing us with this information