AMD Confirms That An APU Powers The Xbox One 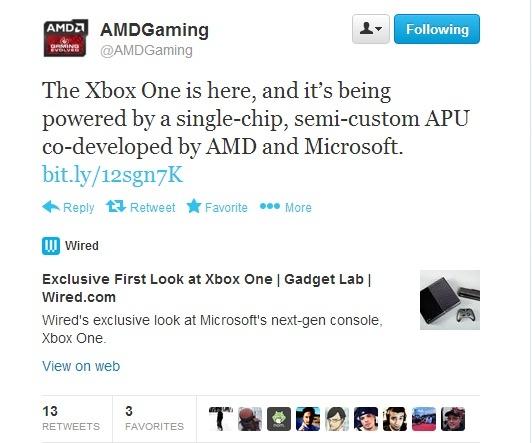 To say the Xbox One reveal/launch event was a success and received well by Xbox fans, would be the biggest lie of the year. Microsoft’s approach to the Xbox One can best by summarised by this video, but what a lot of people want to know now is what is inside the Xbox One and how does that compare to the PlayStation 4.

Well according to AMD the Xbox One is powered by a single chip that they describe as a semi-custom APU that was co-developed with themselves and Microsoft. This APU features 8 cores, an embedded GPU and 8GB of RAM. Other than that the Xbox One’s hardware configuration is shrouded in mystery, strange given that Sony were totally open about the specifications of the PlayStation 4.

We will be sure to bring you some more details of the Xbox One’s hardware specifications when they emerge, in the meantime you can see a really good Xbox One vs PlayStation 4 hardware comparison here.

What did you think of the Xbox One launch? Do you think the PlayStation 4 or Xbox One will have better gaming performance?