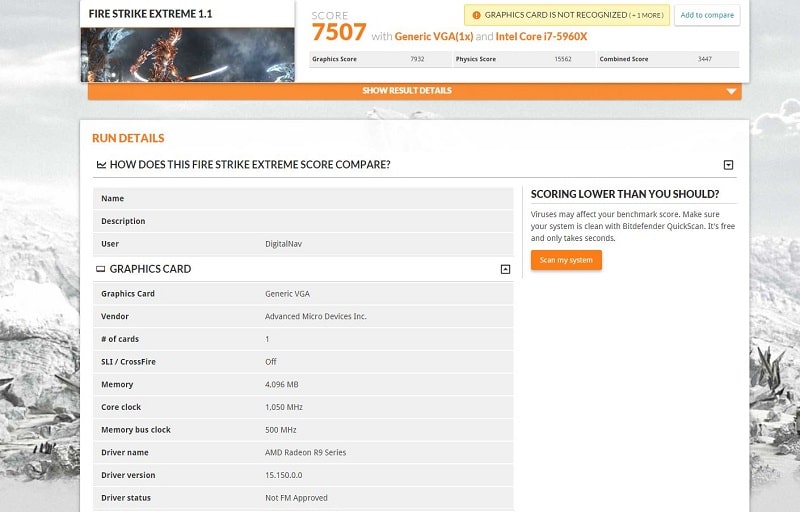 With AMD’s Fury expected in less than a week, a 3DMark Fire Strike Extreme score has been leaked. While showing up as an unknown AMD GPU, the specifications and performance are just about where we expect a Fury variant to fall. For now it’s unknown which variant of the Fury was tested and the results may still not be representative of shipping samples.

Coming in with an impressive score of 7932 in Fire Strike Extreme, Fury is in good company. While falling slightly behind Titan’s 7989, the two cards are well within the margin of error and run to run differences. This could be viewed as good news that AMD is able to practically match Nvidia’s top card or a failure that it doesn’t hold a commanding lead. Without knowing if the card is the XT, Pro or Nano variant, it’s hard to determine where Fury truly falls.

Compared to other cards, Fury does quite well. it holds a good margin over the 980Ti which clocks in at 7781 and the 980 scores lower at 6062. Fury is also leagues ahead of AMD’s old flagship, the 290X which comes in at 5091, around 2000 points lower. For AMD fans, this potentially means gaining a major jump in performance without having to go to the green team. Now the last critical piece of information remaining to leaked is pricing.