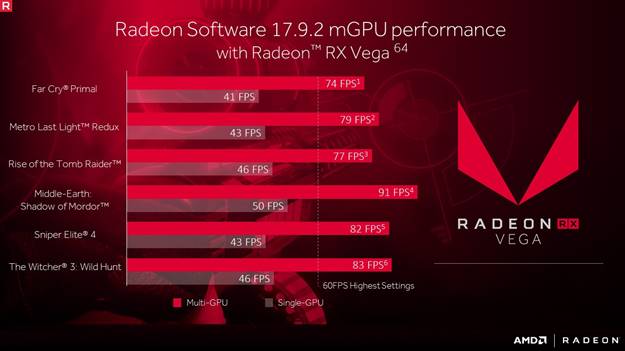 A single AMD Radeon RX Vega 64 for example runs at 46 fps in The Witcher 3: Wild Hunt. The multi-GPU scaling pushes the performance with a pair of RX Vega 64 to 83 fps. A lot of these sample titles are Radeon sponsored games, so it would also be interesting to see how much other games fare. Also, it would be interesting to see how the RX Vega 56 does in terms of scaling as it could offer an excellent value over the NVIDIA alternative.

AMD only talked about the new multi-GPU feature so far. The actual driver package is not available yet at the time of this writing. There is no mention of whether the update also fixes the existing hardware acceleration and Overwatch problems. Blizzard themselves suggests Radeon users to roll back to driver version 17.7.1 to avoid the game crashes.

This article will be updated with the driver download link once it goes live.

The release notes and the driver itself are now available. You can download the driver by following this link.