Another Near Miss as Drone Flies Close to Jet at Heathrow 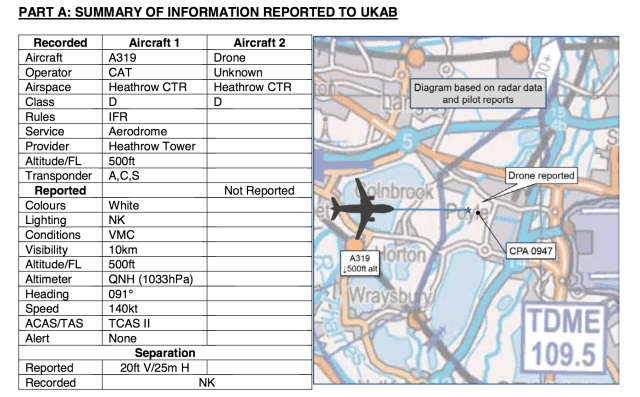 Drones are a wonderful piece of technology and the more we advance them the more we can do. I mean, they have created a drone that works both in the air and even underwater. How can we not find uses for drones that can be deployed at sea, both above and below the sea line? The problem being is that a select few are ruining the experience for everybody, with drones being used and damaging everything from the Empire State building to cutting out power for residents in LA.  The most recent in a long stream of incidents is a near encounter when a drone flew within 30 feet of a jet that was landing at Heathrow.

The Airbus A319 was landing at Heathrow Airport in September while it was on approach to land. The pilot reported that it went so close as 25 yards left of the cockpit and only 20 feet above. The incident was reported to the police and classed as a meeting risk category A, the highest risk that two objects meet short of actually colliding. The worrying part is that the drone was flying at 500 feet, while the legal limit for drones in the UK is 400 feet, with anything beyond that being considered controlled airspace.

This isn’t the first time that a drone has almost collided with an airplane, and given the risk to both the crew and passengers of the craft and those on the ground, drone pilots performing these kind of stunts, putting others at risk, are the reason that the FAA has pushed for drone registration in the USA.