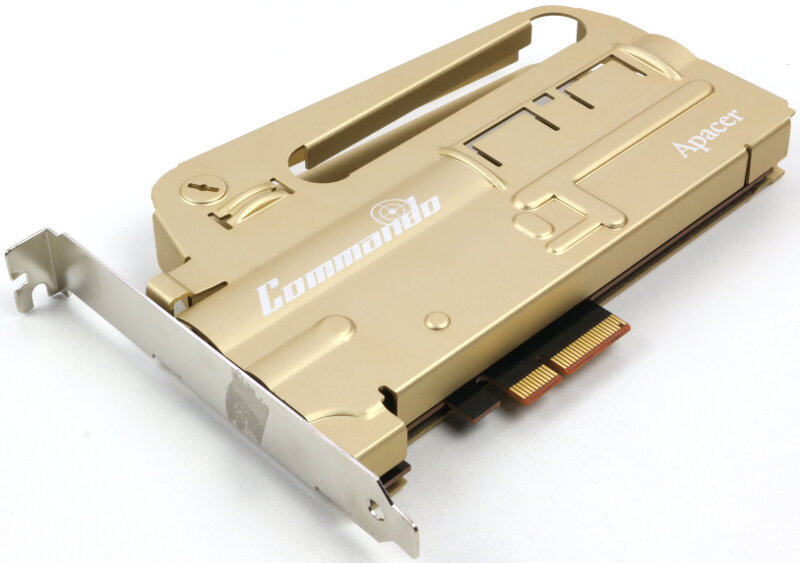 Apacer‘s PT920 Commando PCIe SSD (Product Link) has become widely available now, and today we’re taking the 240GB model for a closer look. The PT920 Commando SSD is surely one to divide the opinions, not because of the performance, but because of the design. While it will speak to some, others won’t like it. There is the third group with closed cases who don’t care what it looks like, only how it performs.

A Design Inspired by the Assault Rifle

The inspiration for the outer casing is from an assault rifle. Gamers are the target audience, and it will probably speak to those passionately play first-person shooting games. The PT920 Commando has details like sight aperture and ejection port.

The design is as it may be, but that’s not the only reason for the casing. It also acts as a heatsink for your drive. NVMe drives run quite hot, and I wouldn’t recommend running them without extra cooling. The grip of the rifle is a thoughtfully designed convection-cooling system, keeping PT920 running cool. Of course, we’ll check how big an impact it has. 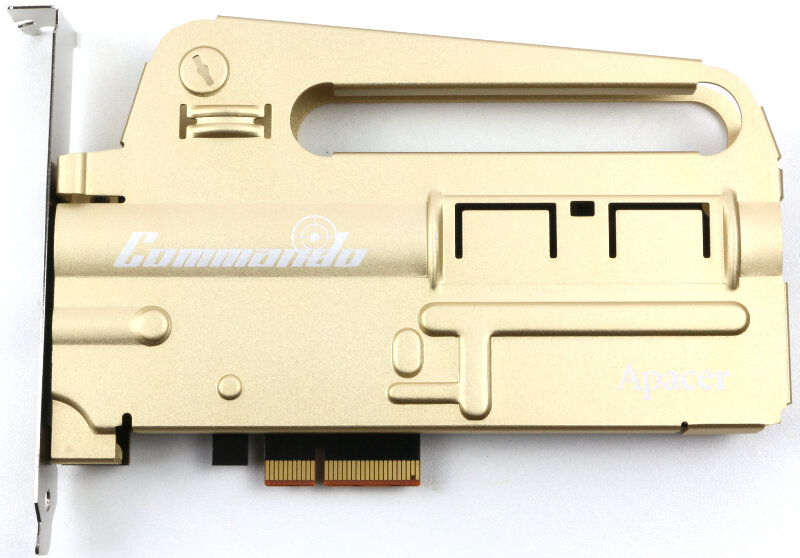 The PT920 is a PCIe Gen.3 x4 drive which is fully NVMe 1.2 compliant. There is a performance difference between the two available models, and the larger drive is the faster one. The 480GB model is rated for up to 2500MB/s sequential reads and 1350MB/s sequential writes. The smaller 240GB model which I’m testing today delivers the same read performance but only writes with 860MB/s.

The random performance is a place where NVMe drives shine, and it’s no different with the PT920 Commando. The 240GB model is rated to 160K IOPS while the 480GB model is rated at 175K IOPS when writing. There is no mention of the random read performance in the specifications, but we’ll see how that is in our tests on the next pages. 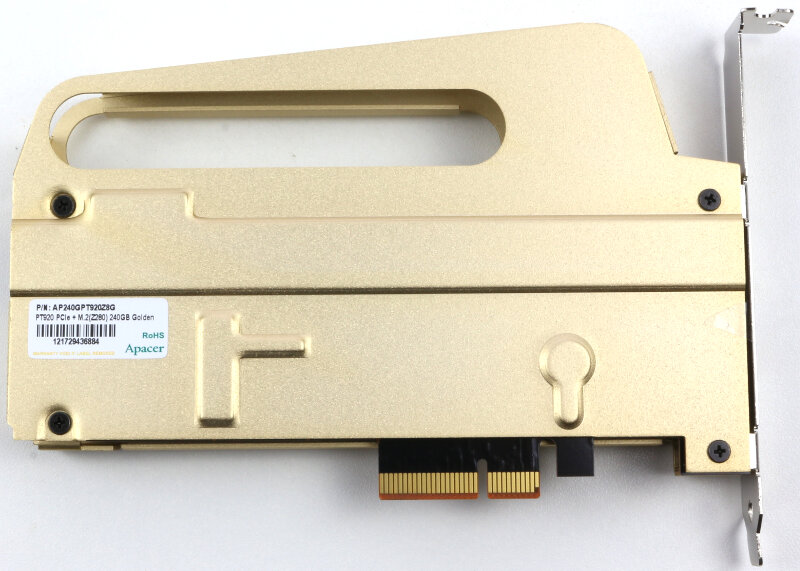 Great performance is a wonderful thing, but our drive needs to last us a long time too. The PT920 Commando has an MTBF rating of 2 million hours. It can handle 3000 program and erase cycles and a written data amount of 349TB per 240GB capacity. Apacer backs the drive with a 3-year warranty.

Inside the PT920 Command is an M.2 module built with Intel MLC NAND Flash and the Phison ps5007-11, or E7, controller. The module is the Apacer Z280 which we previously reviewed here at eTeknix. There’s also 2Gb DRAM cache per 280GB capacity to aid the drive’s performance.

Apacer’s PT920 has a solid set of features. Starting with the basics, we have NCQ, Trim, and S.M.A.R.T. as we expect it from all SSDs. But we also find features to enhance the endurance such as Global Wear Leveling and Smart Refresh. Smart ECC and an ECC engine for up to 120kbit/2KB handle the error correction when needed. End-to-end Data Protection is a nice bonus on top of it all.