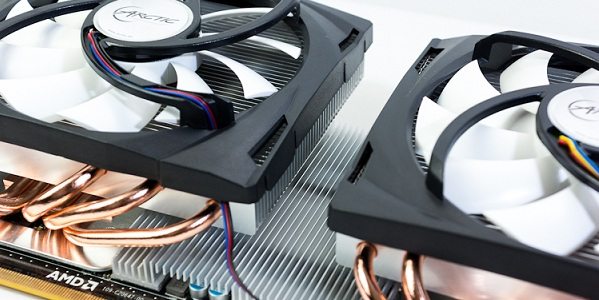 The HD 6990 is the ultimate enthusiast card from the HD 6000 series. In fact, as this is written it is still AMD’s fastest video card because the HD 7990 is still awaiting an official release from AMD. What struck many people about the HD 6990 was that AMD did a marvellous job managing to get two fully-fledged HD 6970 GPUs onto a single PCB. Yet the reference HD 6990 is plagued by two major design issues, high noise and high heat.

If you’ve ever used a HD 6990, or own a HD 6990, then you’ll know I’m not telling any lies when I say these things are super loud. In fact until this product from Arctic Cooling arrived, I actually avoided using the HD 6990 altogether to protect my ears from a bashing.

Heat is the other major problem as already mentioned. Sitting in a room with a HD 6990 in a system is like sitting in a room with an electric heater on 24/7 and this is made worse by the fact the AMD reference design tends to blow all the heat in just 2 directions, left out the back of the case or right into the case.  Arctic’s Accelero Twin Turbo 6990 doesn’t promise to reduce the heat output of your HD 6990 – because it can’t – but what it does promise to do is spare your ears and keep the GPU running at much cooler temperatures.

The Accelero Twin Turbo 6990 is a mammoth cooler for a mammoth graphics card and just from looking at the box we know we are in for a treat with this VGA cooler. I’ve never been so excited about the prospect of being able to use a HD 6990  without the need for ear muffs, with a TDP of 375W I never thought I’d see anything other than water cooling tame this beast – but Arctic look set to prove me wrong.

Pushing the absolute limits of air cooling this Accelero Twin Turbo 6990 features dual 120mm fans and 86 aluminium heat fins plus 5 copper heat pipes per GPU. Yet the fans have a maximum RPM of 1500 so you know straight away the noise is going to be a vast improvement over the stock cooler.

As always, lets have a brief overview of the specifications before we proceed with the product review: 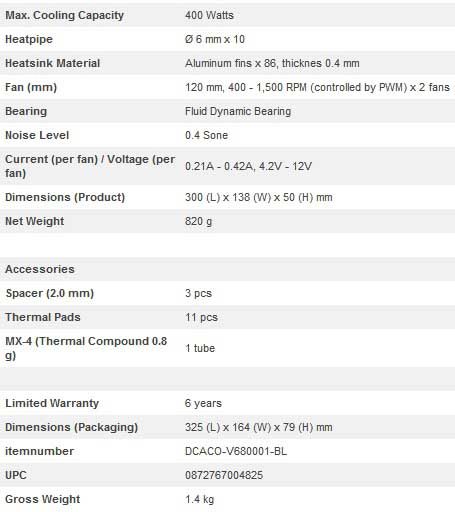