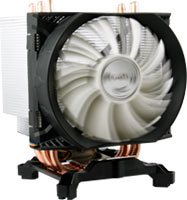 AMD and Intel have worked hard over the years to produce CPUs with smaller dies, increased transistor counts and reduced power consumption. Despite these improvements TDP (thermal design power) for desktop CPUs has remained in the 60-80w range as more cores and improved memory controllers are added to the processor package. High performance CPUs and 6-core chips output around 140w and that’s before overclockers get started with increased core voltages and speed boosts. Consumers have always expected ever faster processors but today’s buyers are placing an increased emphasis on noise. It’s no longer acceptable to have a jet engine cooler under the desk; in short, computers should be seen and not heard.

An increase in power output and a need to maintain a low noise profile has created some challenges for heat-sink manufacturers. The solutions they have created have ranged from coolers with round fins, flat fins, fins in a flower formation, heat pipes and even closed loop water cooling systems. One design that has dominated the air cooling segment for a few years now is the tower cooler. In general a copper base in direct contact with the CPU transfers the heat to a number of heat pipes with in turn dissipate it to the air via a multitude of flat fins.

Arctic Cooling hit the sweet spot of performance versus price with the Freezer series. The Freezer7 is a huge success and today we’re going to find out if Arctic’s new cooler, the Freezer13, can become the new bang-for-buck king.[/COLOR]