Whilst there have been a few new cards come to the market over the last month or so from both NVIDIA and AMD, there’s always the time available in each manufacturers R&D departments for them to tweak, tune and create new products to bring to market. Normally these come in the form of overclocked cards or those with slightly better coolers, but its very rare to see the release of a card that has been taken back to the drawing board a little more than usual.

In the current climate, there is a growing market for smaller, more compact systems, but at the same time ones that have power – lots of it. Consequently, cases like Bitfenix’ Prodigy have become highly sought after due to their small frame, yet high level of flexibility when it comes to fitting large graphics cards, in fact they’ll take any dual slot card that can be thrown at them, still with room to spare. This however pushes slightly smaller and more compact case out of the market, due to their limiting compatibility with longer cards and thus this leads to a lower spec card having to be used as generally they are smaller then their bigger and more powerful brothers.

With compact cases and limited graphics options available, lets bring forward Asus’ latest weapon to the market in the form of the GTX 670 DirectCU Mini. There’s no guessing required as to what the Mini part of the name means, essentially Asus have chopped or squashed the card, which ever way you prefer to look at it and the result of their efforts is a GTX 670 that packs more punch reference card with its overclock, but is no longer than some entry level cards, measuring a mere 17cm in length – that’s 7.3cm shorter than NVIDIA’s reference GTX 670 designs.

But as you would expect, packing more power into a smaller space poses a nightmare for the cooling department and as a result, Asus have developed a whole new fan design which they’ve called CoolTech. This new fan comprises of two different types of fan, but in a single package, namely the blower and axial fans that are used on graphics cards. This new style of fan generates a far greater cooling effect than a traditional axial fan and also gives a far wider reach than that of a blower fan, thus giving a greater cooling potential.

Inside the box alongside Asus include a quick setup guide, a CD with drivers and GPU Tweak and a twin 6-pin to 8-pin PCIe power adaptor. 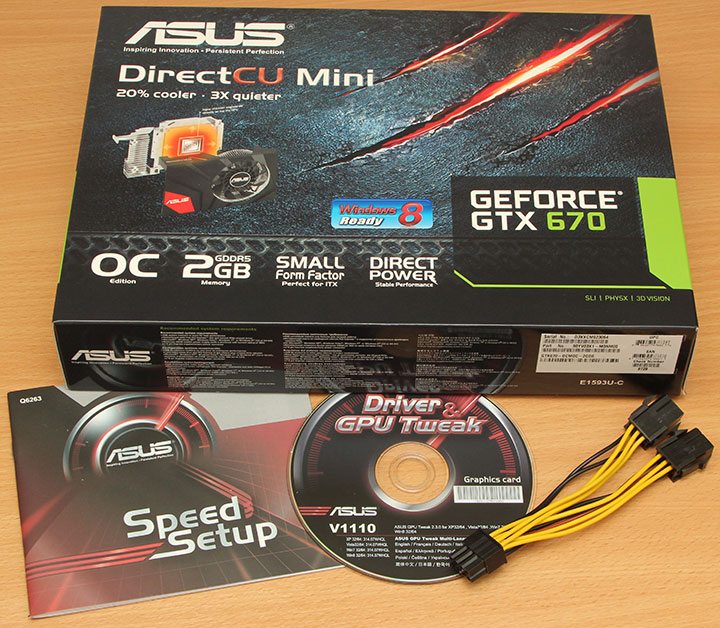