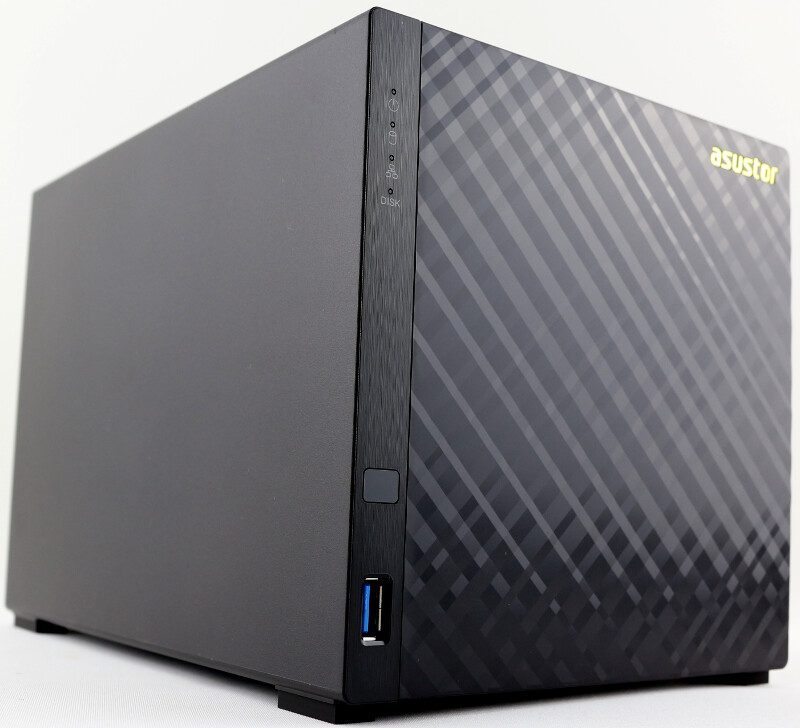 We recently had a look at ASUSTOR’s AS3102T 2-bay NAS and today it is time to take a look at the bigger brother that can hold double the amount of raw storage with its 4 bays, the AS3104T.

The ASUSTOR AS3104T is built around an Intel Celeron 1.6 GHz dual-core processor with a burst speed up to 2.48GHz when it has to perform extra demanding tasks. The processor isn’t just powerful in itself, it also packs powerful features that aid the average NAS usage such as AES-NI hardware encryption engine and hardware transcoding engine. The CPU is coupled with 2GB DDR3L memory that isn’t upgradeable, but it is a dual-channel memory setup. Dual-channel memory will help a lot when it comes to intensive operations such as dealing with 4K content and it is something that shouldn’t be underestimated. 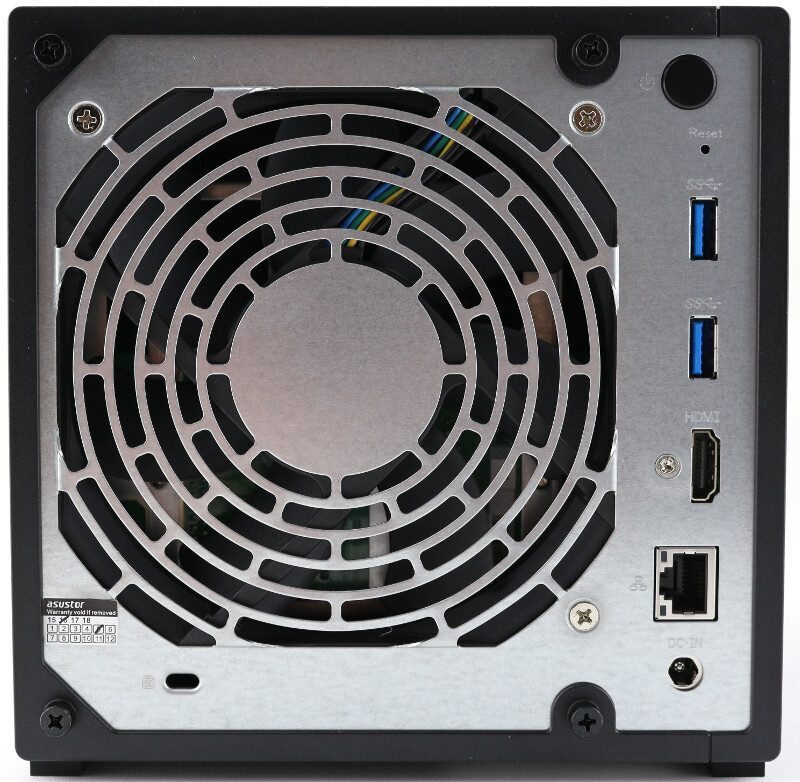 The AS3104T looks like an ASUSTOR NAS with the classic diamond pattern that gives the NAS a nice look when it is being placed where it’s visible. The rest of the NAS is pretty simple and doesn’t stand out. The fact that the NAS doesn’t feature external drive bays further give it a sleek and unified look.

This is a four-bay NAS unit, which means that you can load it with up to four drives and get up to 32 TB raw storage when using 8TB drives. That should be plenty for even the most demanding user’s photo, video, and file collections. Despite this capability, the AS3104T doesn’t take up a lot of space.

Noteworthy features on the front include the built-in infrared receiver that becomes particularly useful when you have it connected directly to your TV or monitor via the built-in HDMI port. Other than the IR port, there are four LEDs and a USB 3.0 port on the front. 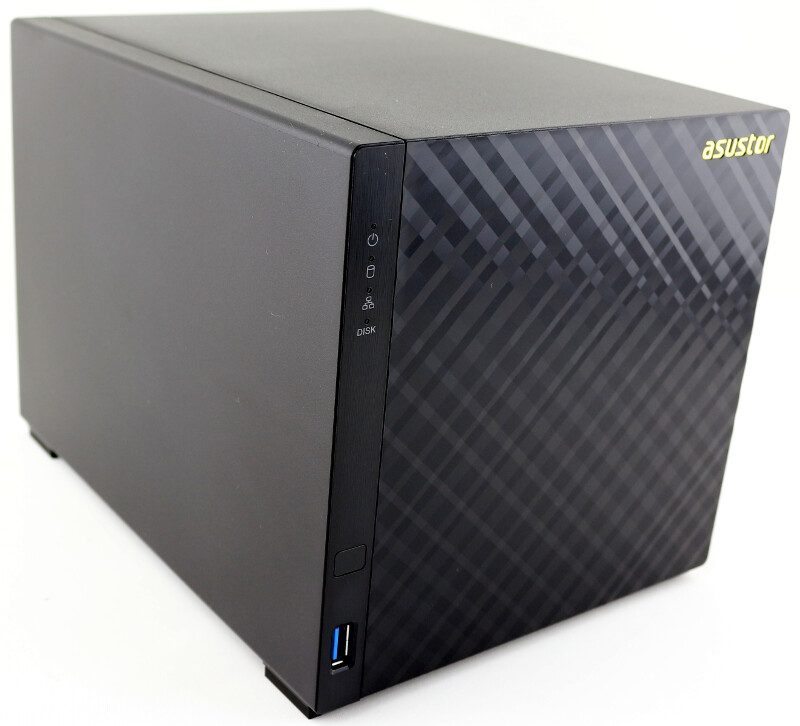 Now that we’re on the topic of external features, let us take a look at the rear of the AS3104T too. Here we find the power button, two USB 3.0 ports, an HDMI 1.4b port, and an RJ45 Gigabit Ethernet port. The USB ports can be used for pretty much anything, from storage drives over wireless dongles to printers and input peripherals when using it directly.

The system easily turns into an HTPC replacement or media centre thanks to these features and apps such as KODI, YouTube, and Plex as well as other apps and games. And you can use all from the comfort of your couch where you can enjoy these features with up to a 4K resolution.

I mentioned earlier that the drives were internal, but that doesn’t make the installation more difficult or tedious. ASUSTOR opted for thumbscrews that allow you to make a tool-less installation. There are two screws on the rear and another four for each internal drive, making it quick and easy to setup when you first get it and just as easy to upgrade at a later time. 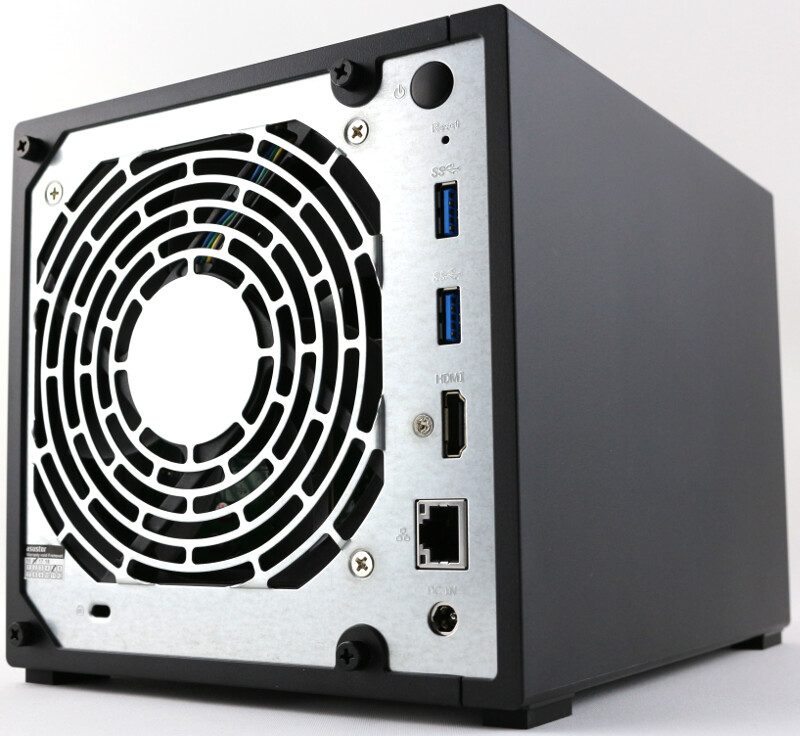 The AS3104T is also a power saving and ECO-friendly device. Auto-standby is supported for both internal and external drives while the fan control makes sure to keep the noise to a minimum while it still supplies enough airflow to cool all the parts. The LED night mode conserves a little bit extra power, but it’s mostly useful to keep annoying blinking lights turned off while you try to sleep or otherwise could get distracted by it. It’s a great feature that also just can be used to dim the lights. It also features power scheduling where you can tell it when to turn itself on, off, or restart on its own.

The power consumption is kept at a low 24.5W during active operation and 11.1W when the internal drives enter hibernation mode. It will barely consume anything during sleep mode where it goes all the way down to 0.9W. The noise level is rated to 19.7 dBA when the hard disk drives are idle, but that could naturally vary a little by location and used drives. 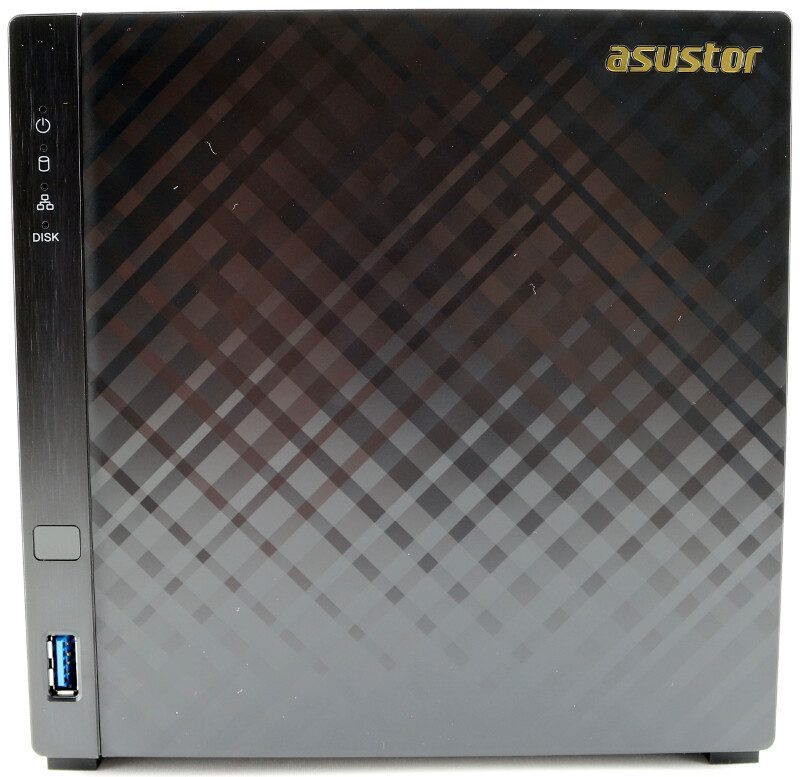 As all ASUSTOR NAS’, this one is also powered by ADM which has become quite a powerful operating system filled with great features. Home users will be happy to find features such as UPnP media streaming capabilities for the general usage as well as more specialized apps such as built-in Itunes server. The photo gallery where you can store and organize all your photos is another awesome feature that a lot of people love and so is the download manager that can handle both peer-to-peer and direct downloads. Takeasy is also available and it allows direct download of media from sites such as YouTube and Vimeo, allowing you to enjoy the videos when you’re offline too. Two other great app features in ADM are SoudsGood and LooksGood, and as you might have guessed, they are for audio and video playback, may it be via locally connected speakers or through your favourite web browser.

More advanced and even business users will love features such as the built-in Mail server and surveillance center. The system also comes with both a VPN server and client abilities. Backups can be handled in multiple ways from Rsync over Cloud to FTP and external drives. Everything you’ll want. Speaking of clouds, ADM also supports Dropbox, OneDrive, Google Drive, and HiDrive.

The default file system is EXT4 but external drives with other file systems such as FAT32, NTFS, or HFS+ are also supported. Even iSCSI is included with the AS3104T that comes with all its advantages such as 256 snapshots, direct storage attachment, and high compatibility and flexibility.

ASUSTOR packed the AS3104T in a package that looks like we’re used to from them. The front of the box displays the NAS unit and has all the feature highlights and specification right there. 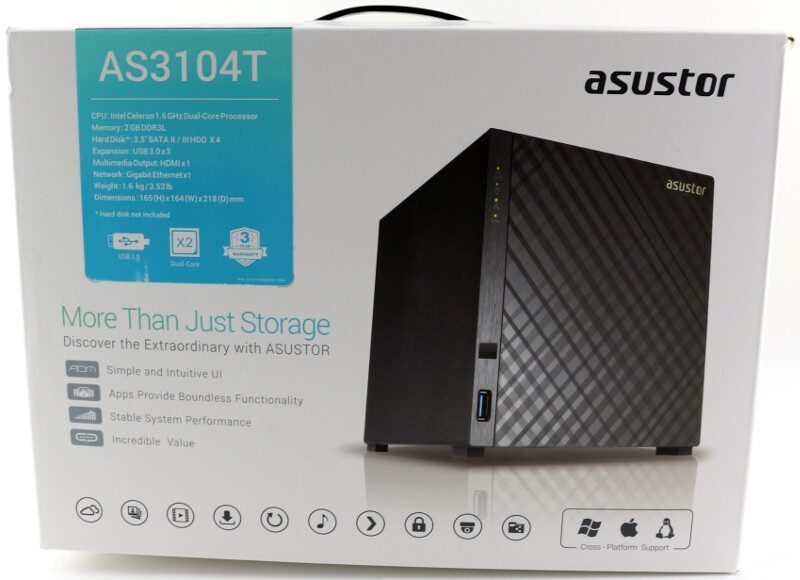 More features and information can be found on the sides and rear of the box. 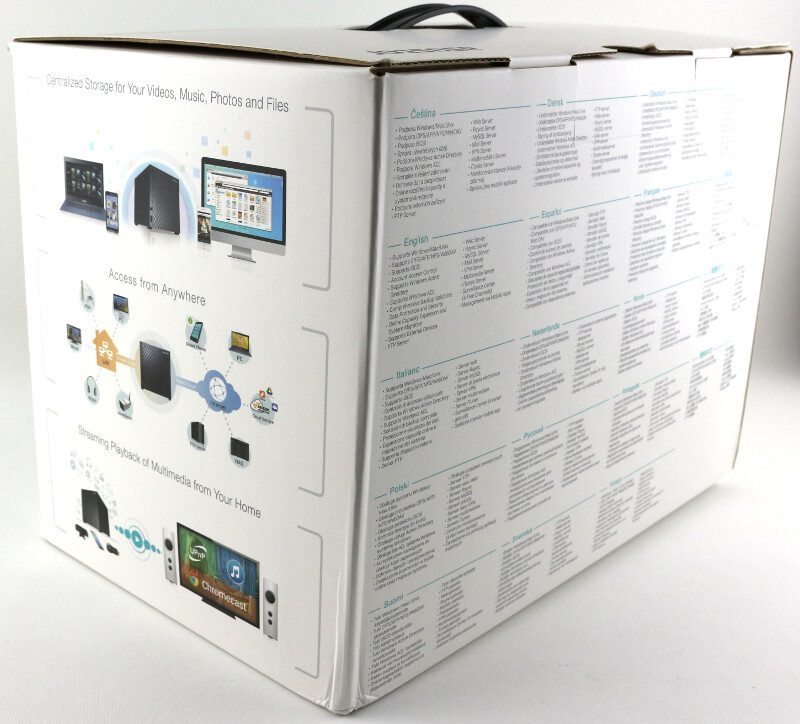 The NAS itself comes with protective film on the front, making sure that the device arrives in optimal condition. 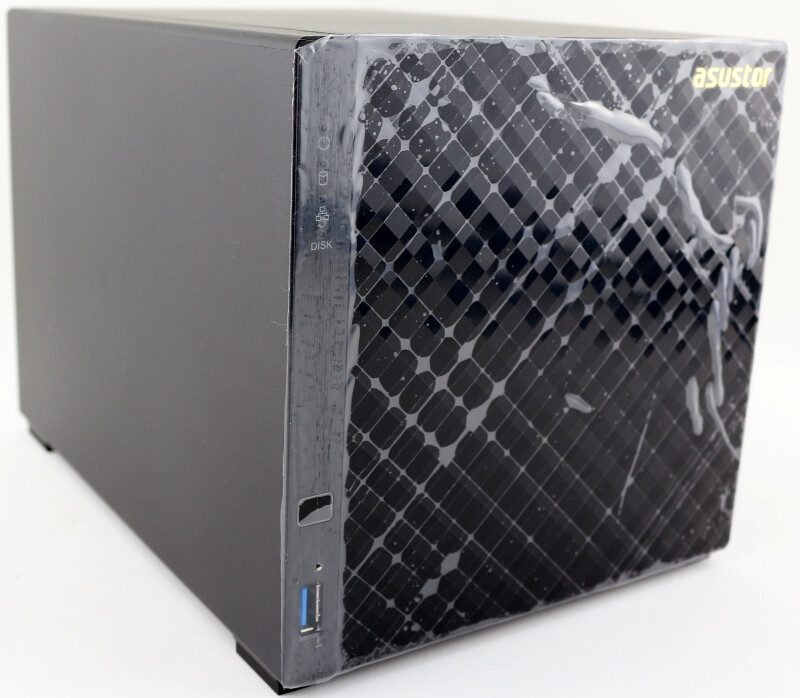 The AS3104T comes with everything you need to get started. A welcome and setup guide, a driver disk, a power supply with a cord for the region you purchased it in as well as an RJ45 LAN cable and eight screws for the drives. 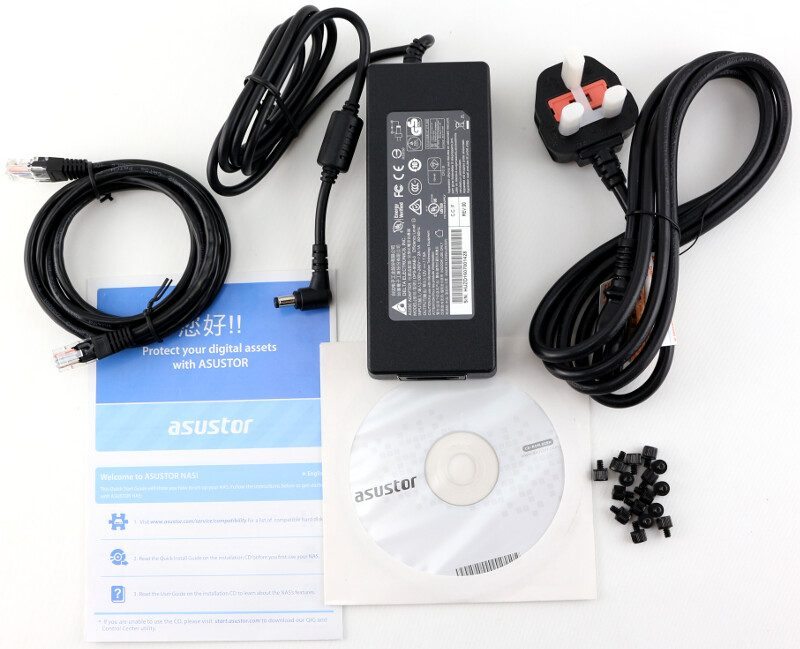