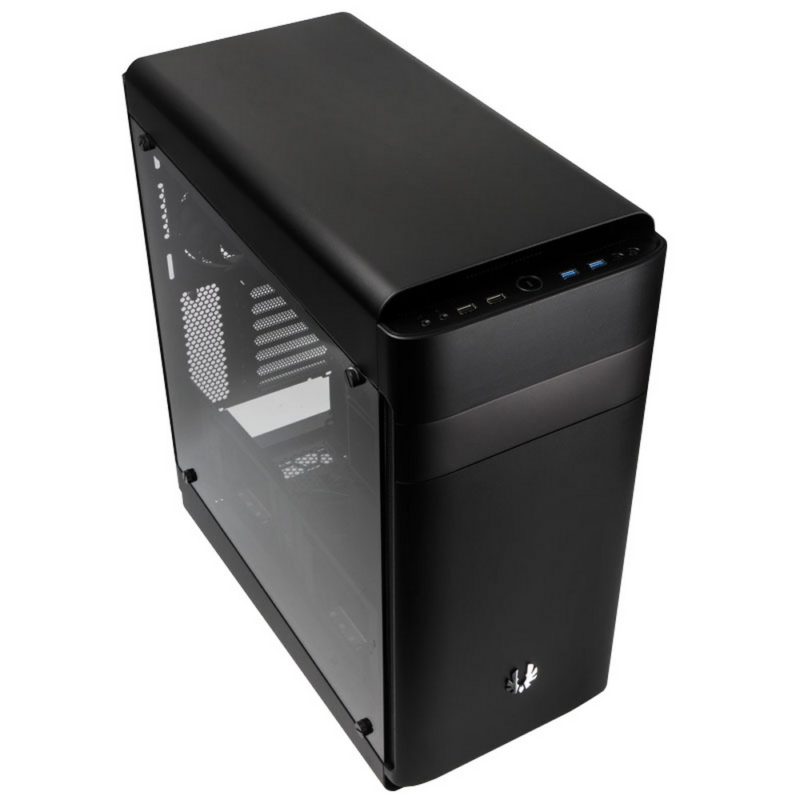 The BitFenix Shogun is a new flagship mid-tower case first seen in person at Computex. It was designed with input from several enthusiasts, combining advanced features high component compatibility. Both the top and front curved panels of the BitFenix Shogun use thick aluminum panels for an elegant look while being lightweight and strong. Like most flagship cases these days, it features dual tempered glass side-panels with a tinted shade. The BitFenix Shogun is slightly larger than a typical mid-tower case since it supports motherboards up to E-ATX form factors but it is not quite a full-tower case. Measuring 525 x 240 x 565mm, BitFenix calls it a “super mid-tower”. It also has plenty of space for enthusiast-class CPU coolers up to 175mm tall and high-end graphics cards up to 410mm.

Although it may not seem like it in first glance because of the aluminum covers but there is substantial fan and radiator support inside. At the front, users can mount up to three 120mm fans (two of which are bundled) or up to two 140mm fans. Similarly, a 240 or a 280mm radiator will fit, although 360mm radiators are not officially supported without modding. There is more than enough space for a 360mm radiator at the top however or a 280mm radiator. At the rear, users can mount a 140mm or 120mm fan/radiator. Another 120mm fan is bundled at the rear by default for exhaust duties.

The BitFenix Shogun gets even more interesting in the main chamber where a modular approach to the components has been utilized so users can move several of the mounting points around depending on the internal hardware needed to be supported. There is also a new “GPU Safe” feature which can provide front load-bearing support to larger graphics cards, preventing sag over time. There are also several smart SSD mounting areas that allow users to display it right behind the motherboard tray and on the PSU shroud.

For those who love fancy RGB lighting, the BitFenix Shogun also supports ASUS Aura sync integration and BitFenix is in talks with other manufacturers to expand motherboard RGB control support. There are quick custom SSD Chroma strips already installed inside the Shogun and users can even move it if wanted.

Current MSRP sets the Shogun at $159.99 USD and should hit the market soon around Christmas or New Years time.