At the start of the year during CES, the major buzz word of the show as we all know was 4K, but whilst this was a buzz word, in the storage sector there were other goings on the was stirring a whole heap of interest. For many years now we have been watching the solid state drive grow and grow, not only in terms of popularity but also their performance and most importantly capacity. One common factor that is associated with SSDs is with out a doubt their more weighty price tag in relation to their mechanical counterparts, however over the last year or so we’ve started to see the price per GB of storage come right down to a highly affordable level, which in turn has made the drives even more desirable.

During CES, Crucial had something rather special to shout about and when we look back to only a few years ago, what they had to shout about would have then sounded insane. This shout out that I’m referring to is a mainstream consumer 1TB – yes a ONE TERABYTE SSD. Because of the speed at which technology has been moving forward, we’ve seen die sizes shrink and bigger and faster NAND chips appear on the market, making the possibility of greater capacity drives, not only a reality, but also at a price that’s not too outrageous.

So forward comes the M500 SSD from Crucial, a drive that not only packs up to 960GB of storage, but also has the tech inside to ensure that it keeps up the pace right through to the last byte as we will see later on. Like many other drives these days, the M500 fits into an ultra slim 7mm frame, which is quickly becoming a new standard, but as some situations still require the thicker build, Crucial also include a self adhesive 2.5mm spacer which can be quickly stuck onto either side of the drive to make it fit that much better. 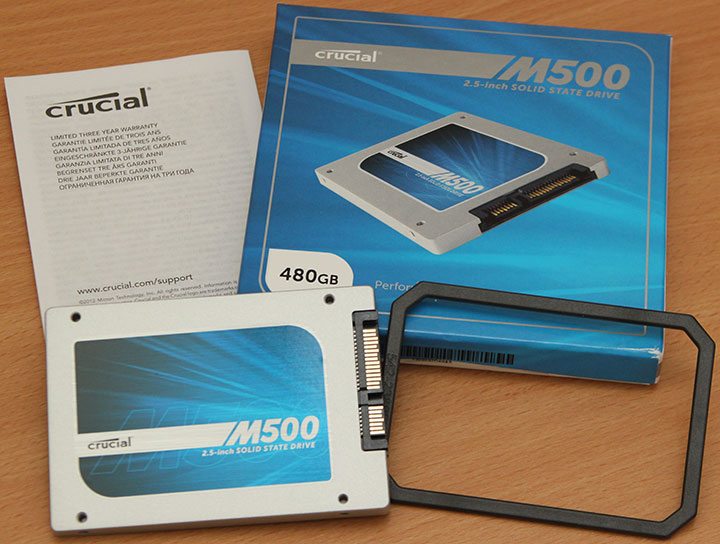