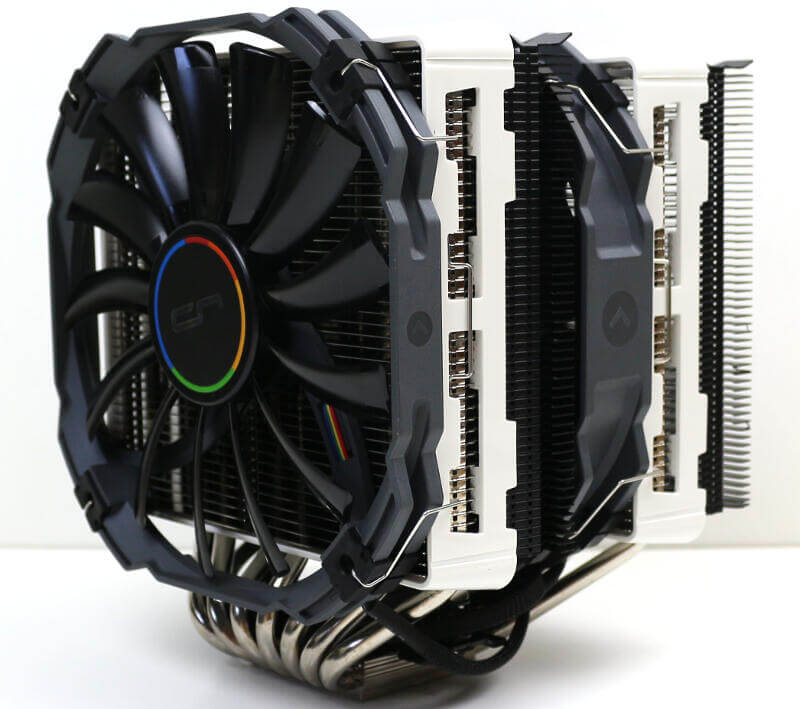 Today I’m testing a cooler on a chip that it isn’t intended for: I’m putting one of CRYORIG‘s R1 Universal cooler on one of my EPYC processors. While the default mounting system doesn’t support this kind of setup, it is possible with the Threadripper adapter which is available. It will be interesting to see how this cooler holds its own against a CPU of this type.

CRYORIG’s R1 Universal is a well-known CPU Cooler by now. It is installed in a lot of systems around the world already. However, probably not on as large a CPU as my EPYC. And with large, I mean the physical size. We all know that this type of CPU has a bigger size.

While the cooler is known by many, we’ll still go over the various details here. CRYORIG used all their knowledge to make a very effective cooler. It starts with their DirectCompress Soldering technique which is said to increase the contact surface between heatpipe and heatsink by 10% compared to traditional soldering. More contact surface means better heat dissipation, and that’s what we want our cooler to do.

The heatsink isn’t just made up of a single piece either. It is divided into two sections with different fin spacing. With a bigger intake and smaller outtake, physics takes over and increases the exhaust air speed. Again, this is something which improves the cooling abilities.

The last aspect to highlight here is the heatpipe connection design. The optimised placement allows each heatpipe to function to their maximum TDP capacity and CRYORIG managed to squeeze seven of them into the R1 Universal. 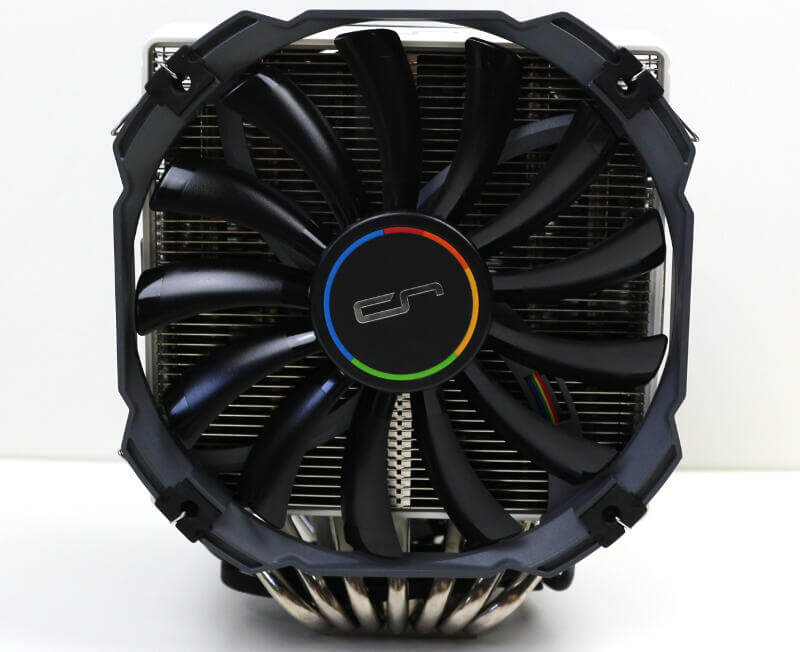 The basic cooler features are covered in the above, but there’s more to a CPU cooler than that. At least most of the time. We also need some fans to get airflow going. The R1 Universal comes with two fans, but they aren’t the same. There’s an XF140 which is a 25.4 thick 140mm fan while the XT140 is a 140mm fan with a thickness of 13mm. The thinner front fan allows for less to zero RAM interference.

Acoustics are just as important as performance. That’s why both the XF140 and XT140 140mm fan integrate acoustic optimizations. Both fans featuring High Precision Low Noise (HPLN) bearing and the detachable Acoustic Vibration Absorbers that give the fan a snugger fit while cancelling vibration and noise at the same time.

Every good CPU cooler also needs a proper mounting system. In this case, it is called MultiSeg and it allows for cross-platform support as well as quick and easy installation. 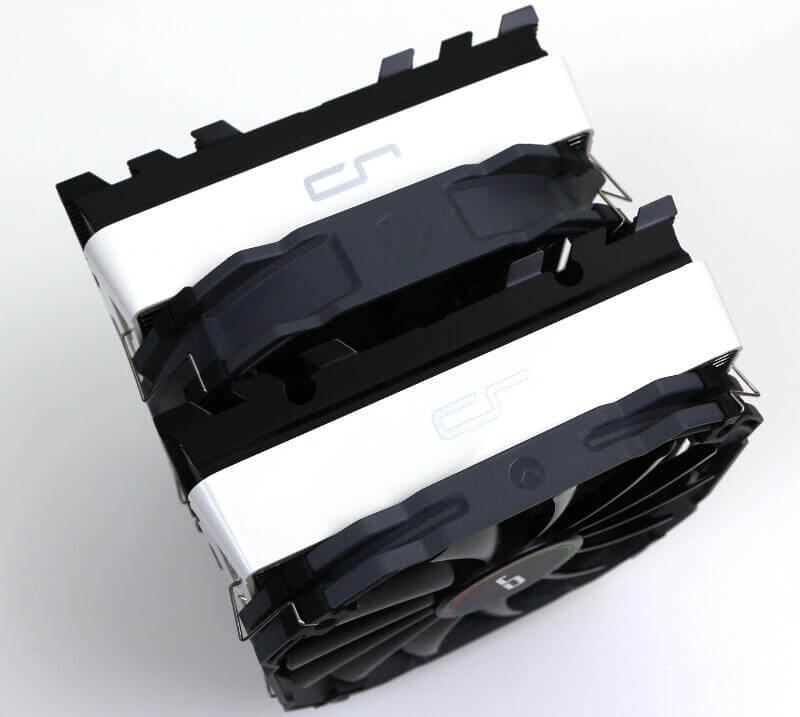 Zero RAM Interference? Yes, but With a Catch!

CRYORIG’s R1 Imoversal comes with a feature called Zero RAM interference. This is due to two features, the thinner front-facing fan and the asymmetric design. This shifts everything slightly to one side which is great for motherboards which only have memory slots on the one side. At this point, we should mention that this is what the cooler is designed for.

However, today we’re testing it in a different setup and with a mounting adapter. These large TR4/SR3 processors also come with more memory support and most motherboards for them have memory slots on both sides of the CPU. That kind of thing creates an issue with this asymmetric design. 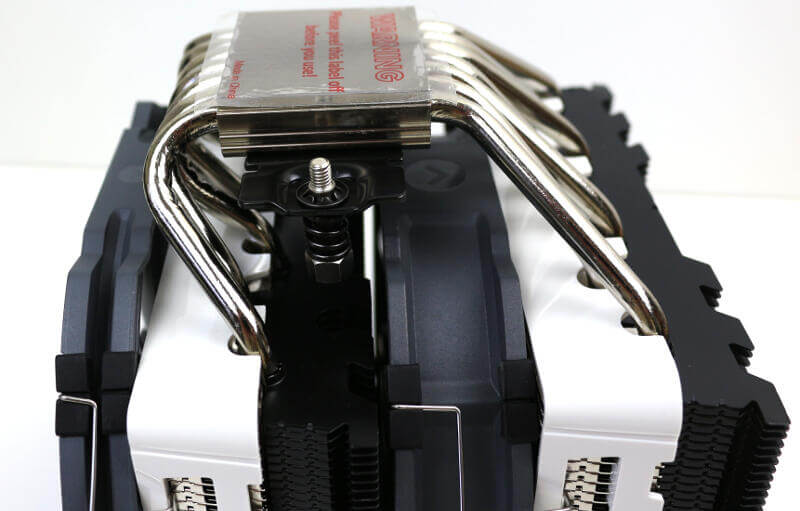 Colour options are no rarity these days, but it’s mostly done by RGB lighting. Not so with the CRYORIG R1 Universal which uses a more old-school approach. The covers are removable and replaceable. It’s an add-on which you’ll have to get extra if you wish to, so it’s something to keep in mind. However, it does give users the option to match the colour with the rest of the setup. The default brackets are white, but there are Red, Orange, Green, Blue and Black options. 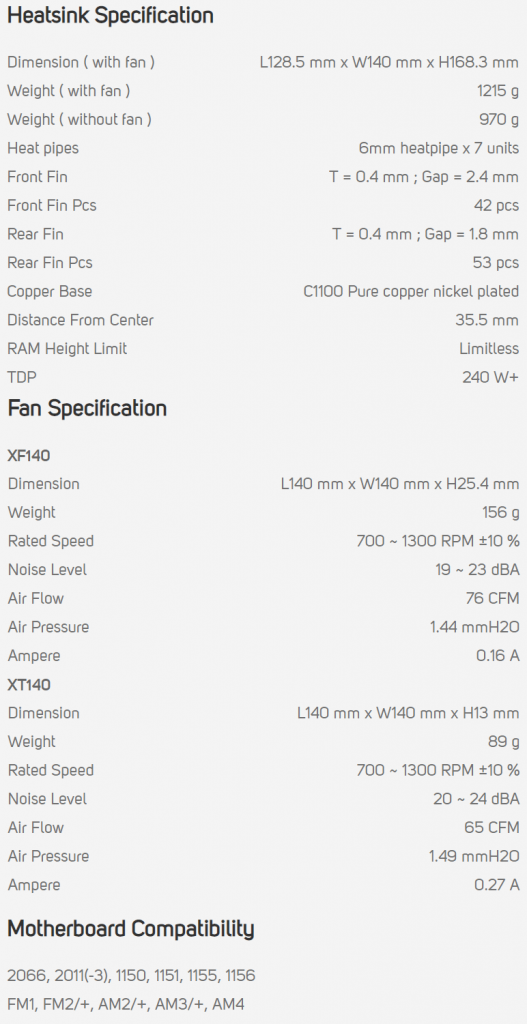 What CRYORIG Had to Say

“The R1 is an accumulation of years of research and design. Putting good use to our multiple manufacturing and design patents, the CRYORIG R1 is jam packed with multiple one of a kind features. The long list of features include our patented DirectCompress full contact soldering process, Jet Fin Acceleration System, Heatpipe Convex-Align and Displacement Optimization Systems.
The R1 will be featured in two flavors, the R1 Universal and the R1 Ultimate. The R1 Ultimate will have two XF140’s full 140x140x26mm fans, and the ability to add a third XF140. The Universal version features one XF140 and a thin profile 140x140x13mm XT140 silent performance fan, offering terrific performance with almost no tradeoff for performance and compatibility.”

CRYORIG packs the R1 Universal in a full-colour printed box. Every side is filled with either photos of the product or information about it. 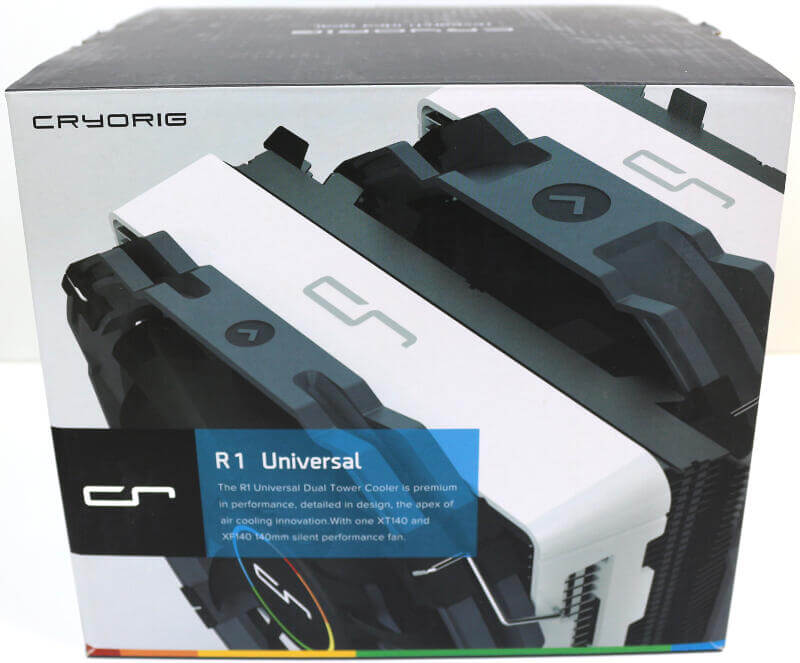 The ease of installation is one of the highlights in this cooler and as such, it has a prominent highlight on the side. 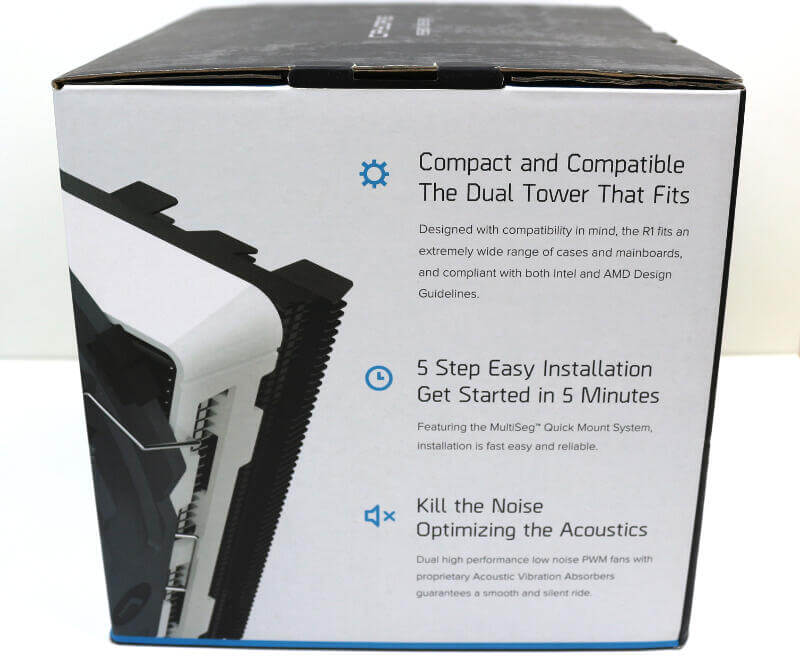 The rear size has all the specifications of both the heatsink, fans, and the combination of both. 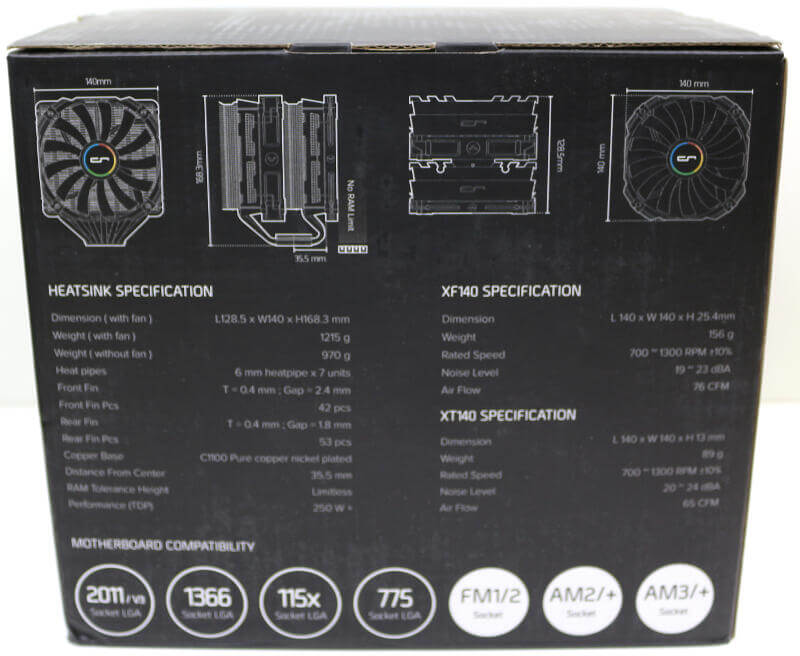 All the accessories are nicely packed inside, making sure everything arrives as it should and in one piece. 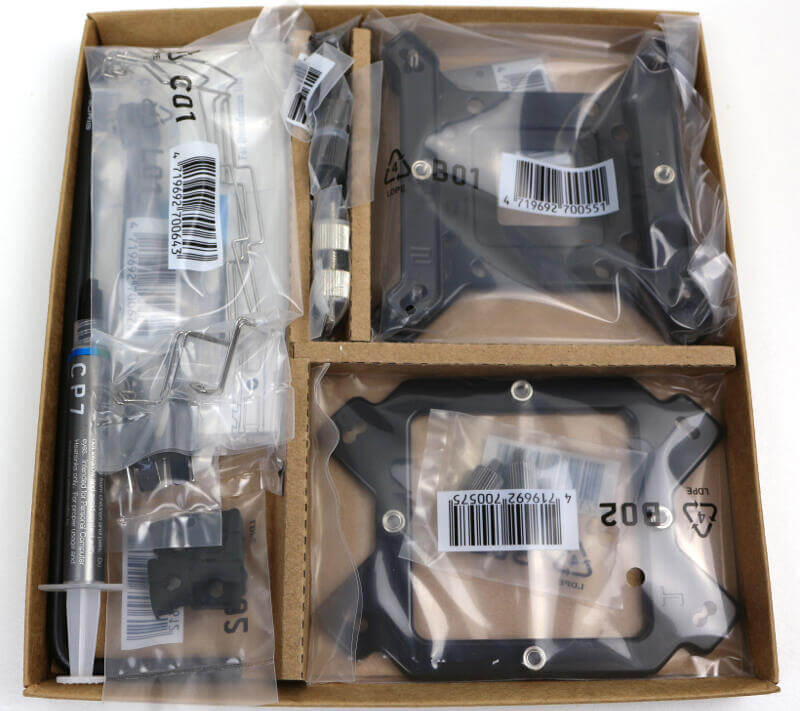 In terms of parts, there’s everything you’ll want. We get mounting options for AMD and Intel, a y-cable for motherboards with just a single CPU FAN header, a screw-tool, and all the smaller parts you’ll need. The package also includes an installation manual, fan clips, a cleaning wipe, and a tube of CP7 thermal paste. 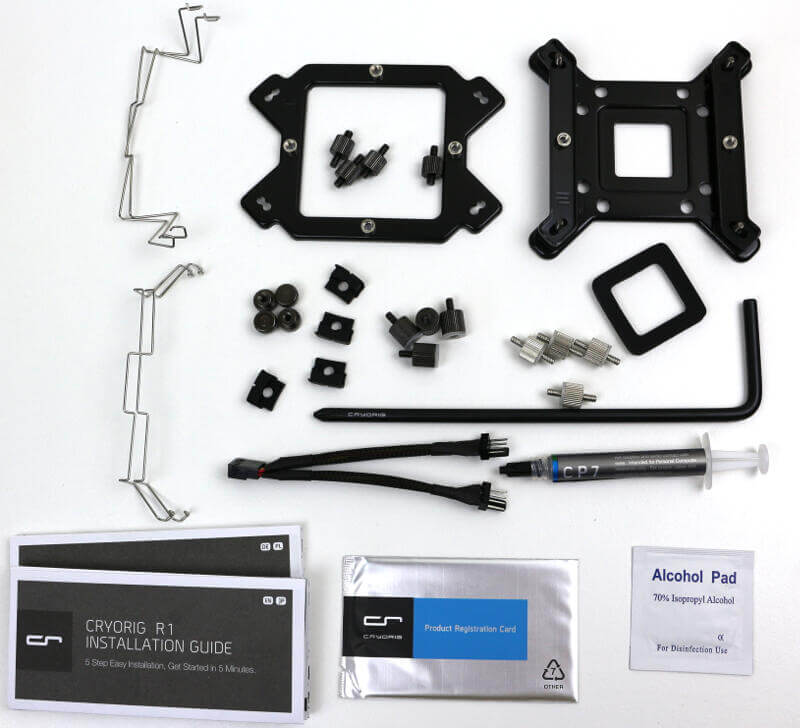