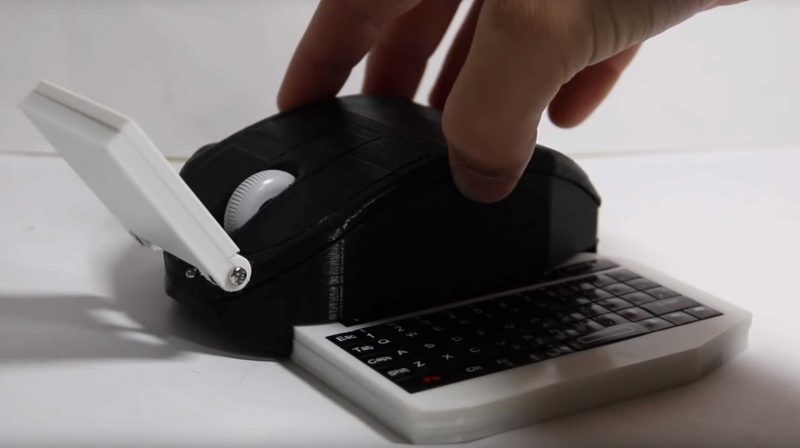 PC Mouse With An Integrated System

When it comes to picking a PC mouse, I am perhaps a little pickier than most. For example, when mine broke last year, I must’ve tried at least 4 or 5 models (possibly more) before I finally landed on one that felt right for me. It doesn’t, however, take you long to appreciate just how many models and variants there are out there.

In a video created by ‘Electronic Grenade‘, however, he has designed a mouse that is more than a little different from your standard. Not only is a fully functional as a pointing device, but it also contains an integrated keyboard, operating system and even a monitor!

The computer mouse, as the product is known, manages to pack in practically every feature you would expect from a PC. All of which can be moved or re-inserted to the base mouse model to allow it to work as either a full-blown system or as just a mouse. What massively tops off the design, however, aside from that fantastic Bluetooth keyboard, is the 1.5″ LED display which actually works to show you the operating system. This really is a neat concept!

It Isn’t Perfect But…

Now, of course, this design isn’t perfect. If anything, it’s more of an interesting concept than a realistically working system. For example, there’s no way my fat pudgy fingers would ever be able to operate that keyboard. In addition, my eyes wouldn’t stand that 1.5″ display for more than 5 minutes. At least not before giving up completely.

It is, however, certainly one of the most innovative designs we have seen for a while. It is though, if nothing else, a design to definitely be appreciated.

What do you think? Are you impressed with the design? Do you think you could use this? In addition, is there any improvements you could make to it? – Let us know in the comments!