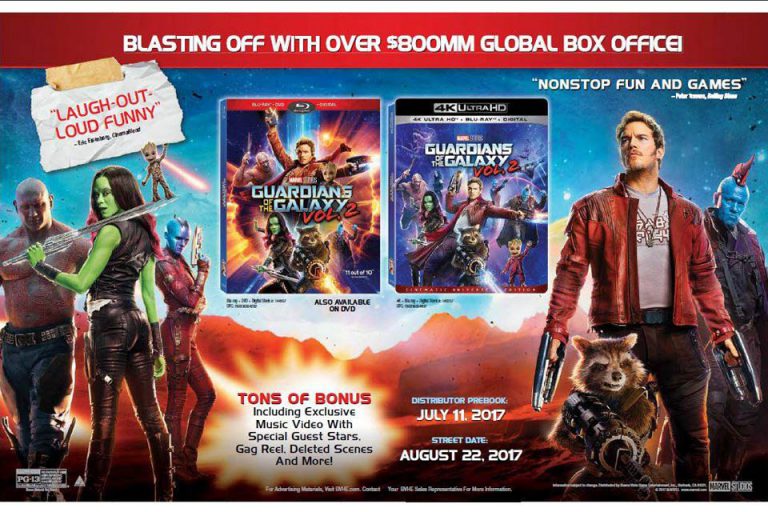 I’m a big fan of home cinema technology. I’ve already made the plunge and invested in a 4K HDR TV, as well as Dolby Atmos technology. From what I do know of that market, it seems I’m far from alone. The new formats are steadily on the rise as prices of the required hardware continue to drop. As much as my movie collection is growing, there’s on glaring omission; Disney.

Disney is huge, and they’ve had no need to rush into this market. They’ve got a vast back catalogue that they’ll no doubt bleed out over the years. They will likely remaster and re-release many classics on the new format. However, to date, they haven’t released a darn thing in 4K. That’s all about to change, with the reveal that Guardians of the Galaxy Vol. 2 is set to be released.

Guardians of the Galaxy Vol. 2

The good news is that the movie will be released in the 4K format, with HDR colour mastering. Hopefully, it will also have a Dolby Atmos or DTS:X soundtrack, but we’ll have to wait and see. Keep in mind, however, that CGI heavy movies are almost always shot with a 2K intermediate, rather than at native 4K. Of course, with HDR, 2K, and a few other tweaks involved, it’s still going to be a cut above the Blu-Ray release.

“4K Ultra HD is almost certainly the best way you can see this movie at home – with more definition and the most vibrant colors possible on your home screen, and with the brightest brights and the blackest blacks. A being composed of light truly appears to be a being composed of light! This version is a roiling cinematic river of beauty and I’ve taken hundreds of hours personally making it look the best it can. This is one of the reasons why LIGHT and COLOR are such important elements of Vol. 2’s story, and why we screened the World Premiere in Los Angeles in essentially this format.” said James Gunn, the movies Director.

The movie will hit stores on August 22nd. If this does well, I don’t expect it will be long before we hear of many more movies coming from Disney in the latest formats. Fingers crossed they brush up a few of their big hitting classics sometime soon too.