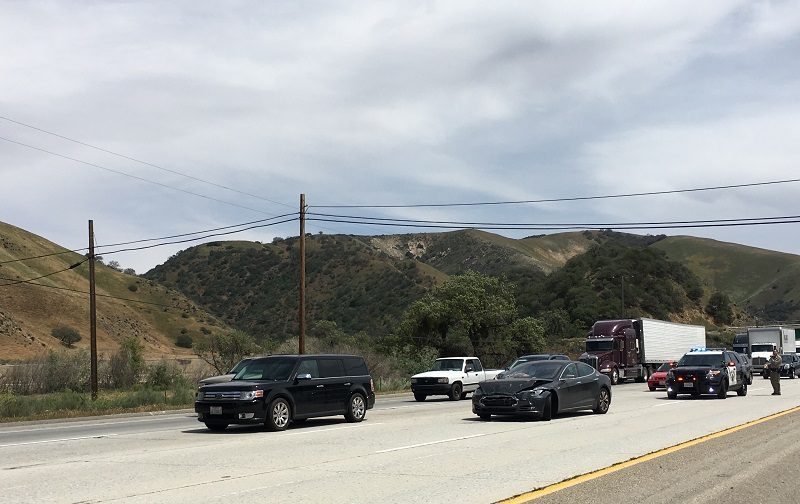 It looks like not everyone is happy with Tesla’s autopilot system, as a Utah-based Tesla owner has stated last week that his parked Model S crashed into a parked trailer out of the blue. Now, another driver named Arianna Simpson has come forward with claims of autopilot error, and in this case, the car reportedly failed to brake and slammed into the vehicle in front of it. However, Tesla doesn’t agree with this scenario at all, stating that the vehicle’s data logs don’t support the story. The accident happened on April 26, north of Los Angeles on the I-5, and the Tesla Model S in question was cruising in autopilot mode. Simpson’s description of the incident is the following:

“All of a sudden the car ahead of me came to a halt. There was a decent amount of space so I figured that the car was going to brake as it is supposed to and didn’t brake immediately. When it became apparent that the car was not slowing down at all, I slammed on the brakes but was probably still going 40 when I collided with the other car.”

On the other hand, Tesla says that the car’s adaptive cruise control system is blameless, as hitting the brake pedal actually deactivated the autopilot and traffic aware cruise control thus returning the car to manual control instantly. By slamming on the brakes, Simpson had deactivated the automatic emergency braking system thus causing the crash. Tesla has released a statement regarding the incident:

“Safety is the top priority at Tesla, and we engineer and build our cars with this foremost in mind. We also ask our customers to exercise safe behavior when using our vehicles. Since the release of Autopilot, we’ve continuously educated customers on the use of the feature, reminding them that they’re responsible for remaining alert and present when using Autopilot and must be prepared to take control at all times. Tesla Autopilot is designed to provide a hands-on experience to give drivers more confidence behind the wheel, increase their safety on the road, and make highway driving more enjoyable. Autopilot is by far the most advanced such system on the road, but it does not turn a Tesla into an autonomous vehicle and does not allow the driver to abdicate responsibility.”

Even though we’ve come a long way over the last few years as far as self-driving technologies are concerned, it’s clear that these systems still need to be perfected further. Who do you think was to blame in this particular case?