This is a much simpler beast than the previous model from Corsair. No wires mean no awkward mounds and cable runs inside the unit, making it smaller and lighter. In the box, you’ll find the lapboard, as well as some additional clips. 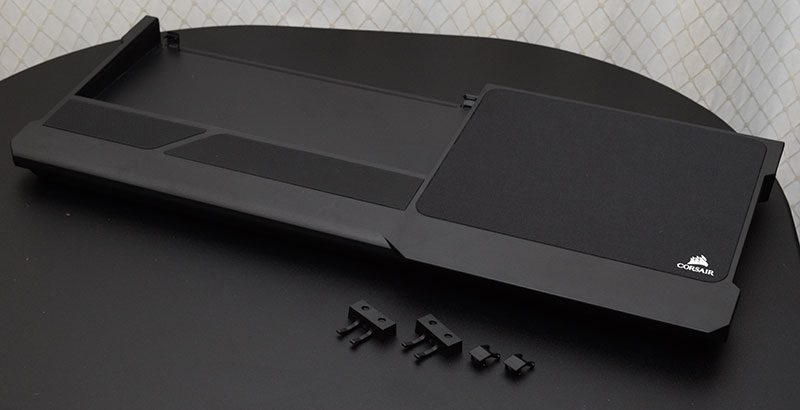 These aren’t needed to mount out of the box, it looks like they may actually be spare clips.

The overall design is fantastic, with a large cut-out that allows you to easily drop in your K63 keyboard. I guess you could use the wired one too, but obviously, the wireless one that was just released is the optimal solution.

The mouse mat is built in, and it’s a pretty good size too. Obviously, making it bigger would not be great, as you need to be able to use it comfortably while sitting on the couch. It’s pretty hard wearing too, so it should last, and there’s a light texture for added control. 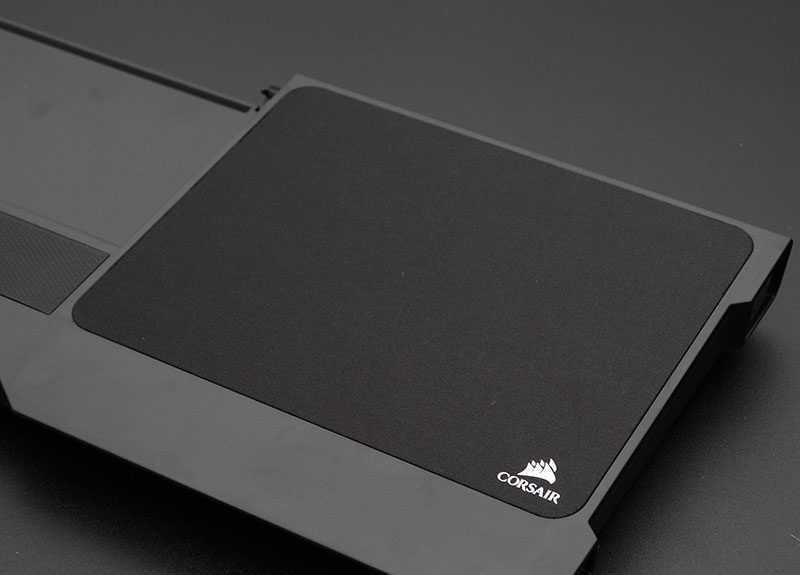 Since you cannot use the keyboards wrist rest, there’s one built into the Lapboard. It’s made of hard-wearing rubber and has a grip texture. Like the mouse pad, it’s not really that soft, so it’ll hold up to a lot of use without wear. 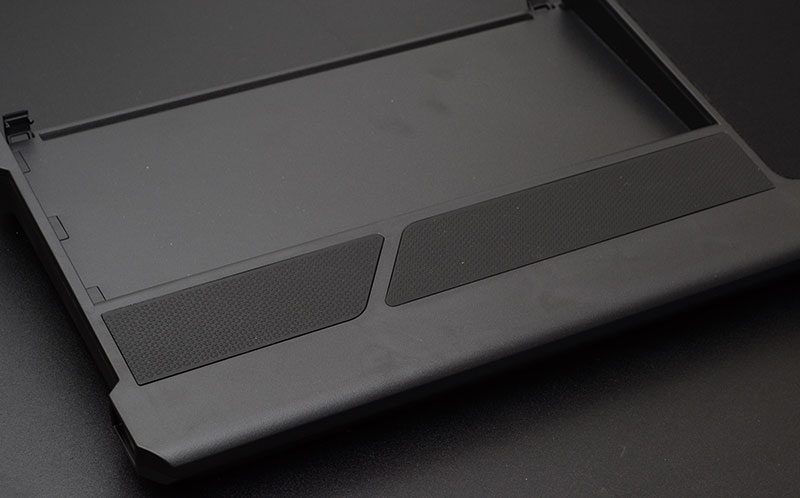 Balancing a large plank on your legs isn’t ideal, as it would slip and rock all over the place. Fortunately, the Lapboard comes with some deep foam padding and a soft durable fabric cover.

The deep padding helps it hold firmly on your lap, and also means it helps distribute the weight. It’s very comfortable overall, and a nice addition to the setup. 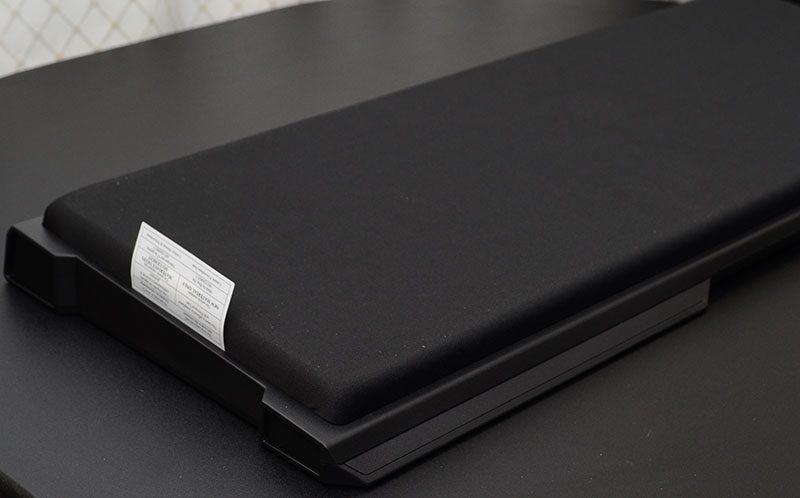 It has a nice wedge profile to it, that gives you a good wrist position while it’s on your lap. Thankfully, it’s not too thick though, so it doesn’t feel particularly cumbersome or heavy.

It’s really a case of plug and play. You just drop the keyboard into the big keyboard shaped hole. There are some clips at the back, locking it in place too, so it’s not going to slip out while in use. 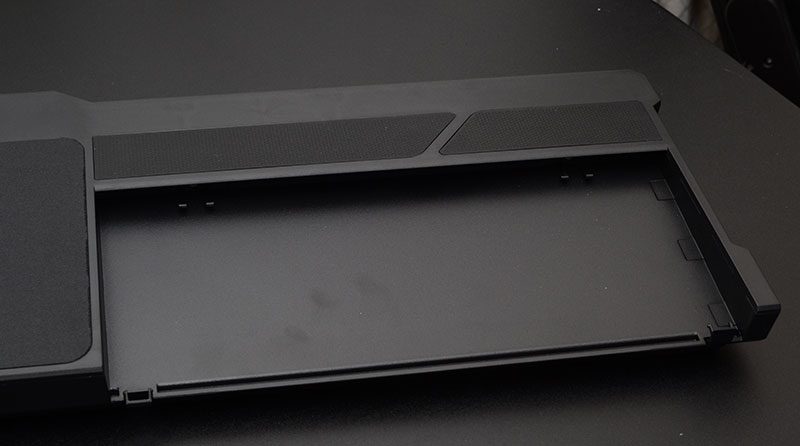 With the keyboard mounted, everything looks super flush and fits perfectly. The mouse, obviously that just plonks down on top of the mouse mat; that’s easy enough and we’re ready to rock!

It’s a strange feeling moving to the couch with a keyboard and mouse. You would think it would feel natural, but it really doesn’t, at least not at first. Sure, I’m no stranger to gaming from the couch, but I’d typically use either an Xbox One or Steam controller. Without a doubt, the couch is far more comfortable than sitting at my desk. I can put my legs up, grab some cushions, grab a blanket, it doesn’t matter, there’s just more room overall. 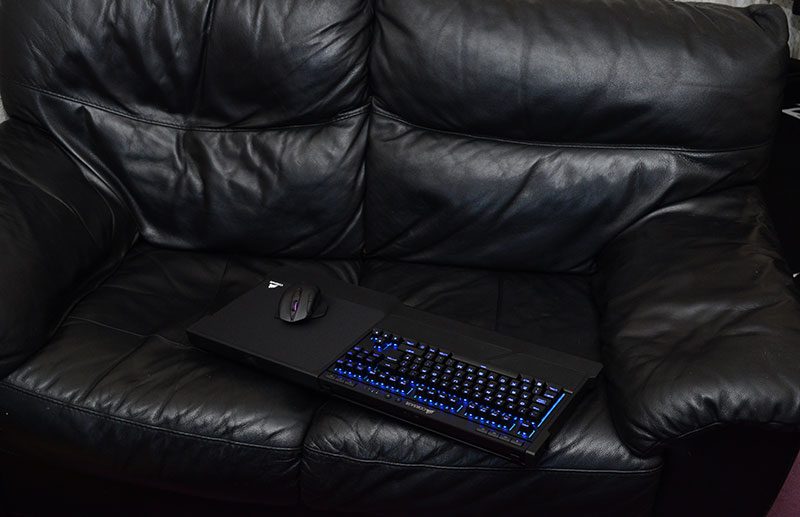 The Lapboard looks stunning and sits on your legs with ease. I won’t lie, it’s on the arm of a couch here. It turns out it’s bloody tricky to operate a DSLR to picture something on your lap while trying to show the TV in the same shot, so I cheated. The padding is fantastic on the base though, and between the couch and the Lapboard I couldn’t have been more comfortable, even if it may look a little cumbersome to onlookers. The wireless performance didn’t skip a beat either. My PC is about 10ft away behind me here, and it’s absolutely not an issue. 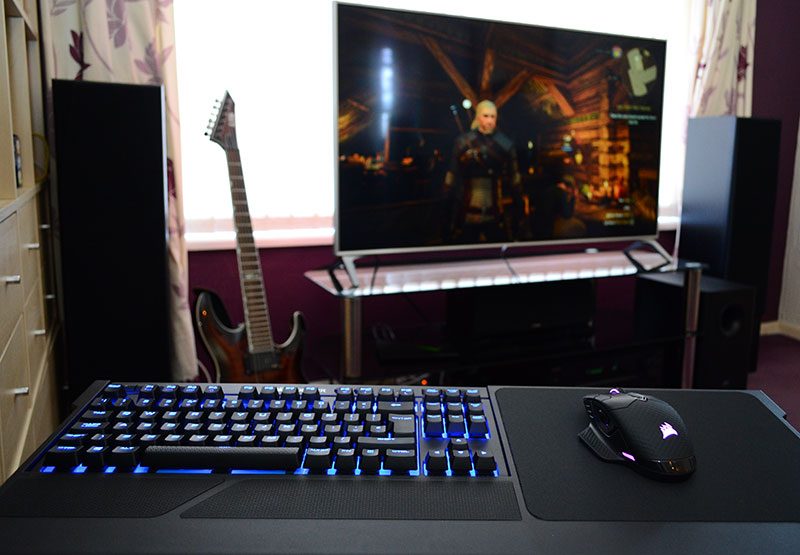 Sure, you can use this on a dedicated PC with your TV, but I’m using Nvidia Gamestream and it works just fine. Little things like being able to use my big surround sound speakers, HDR, Dolby Atmos, 4K, and the whole couch while playing PC games is pretty kickass. Having a keyboard and mouse on hand to really get stuck into the latest shooters or anything really is a big help for sure. Heck, I could even work on the couch now if I wanted to. 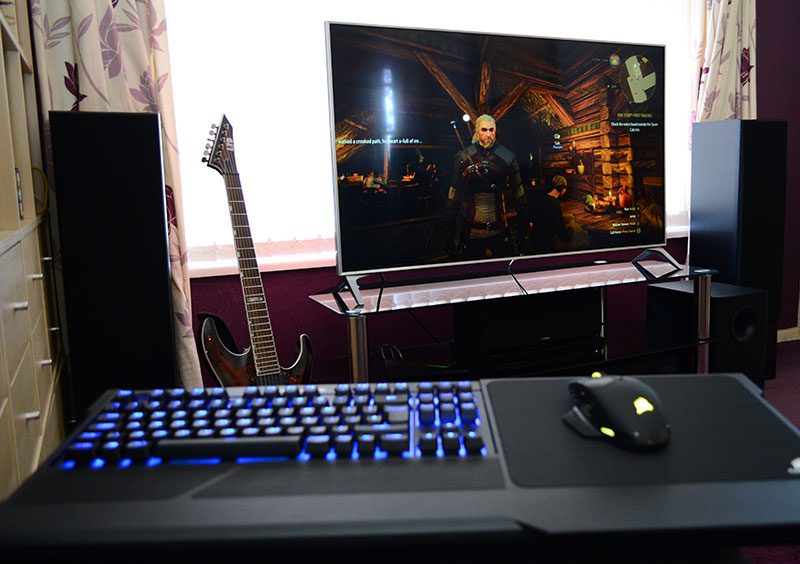 It’s not a perfect setup, but it’s pretty close. I can stand the keyboard mounted in the lapboard down the side of the couch. However, then I have nowhere to store the mouse, so I need to pop it on the bookcase so it doesn’t fall off. Other than that, it’s pretty quick and easy to break away from your desk with your keyboard and mouse, easier now than it has ever been. 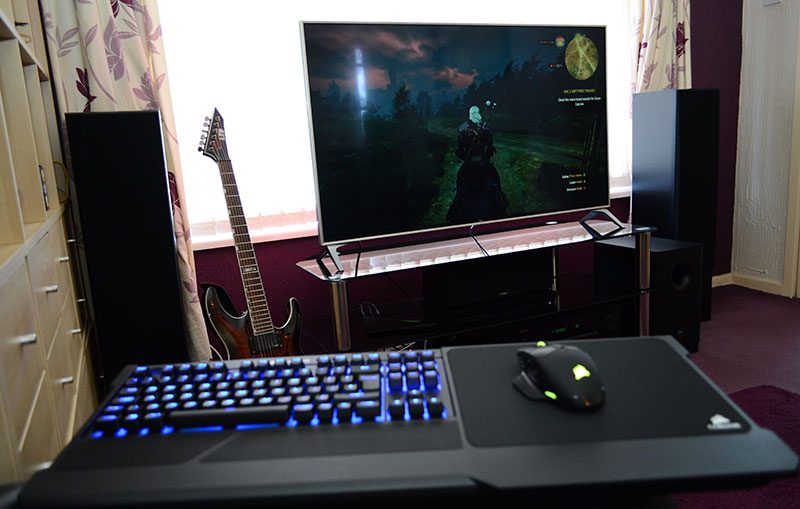