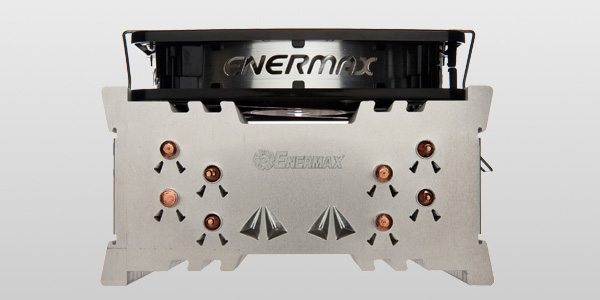 Enermax have decided to take a daring entry into the CPU cooler market. Their debut line-up consists of a tower style cooler and a top-down style, low profile variant. A pair of actual heatsinks creates the line-up but Enermax have intelligently created 5 different products by bundling the tower style ETS-T40 with 3 different fan variations and the top-down style ETS-T60 with 2 unique fan configurations. Today, we will be looking at the tower style ETS-T40-VD which is bundled with Enermax’s extremely popular Vegas Duo fan. Be sure to keep an eye out for our review of the ETS-T60-VD soon!

The ETS-T40-VD is built around a single tower design consisting of 4 direct touch, 6mm copper heatpipes and an aluminium fin array. Enermax claim to have reached a “New Milestone” with their heatsink’s 0.09°C/W thermal resistance. The 3 innovations responsible for this value of thermal resistance are Enermax’s patented Stack Effect Flow (SEF), Vortex Generator Flow (VGF) and Vacuum Effect Flow (VEF). A single 120mm Enermax TB Vegas Duo fan is bundled with the ETS-T40-VD which utilizes the 4-pin PWM connector and is capable of reaching 1800 RPM while shifting up to 76 CFM of air.

Compatibility comes in the form of support for every modern Intel and AMD socket other than LGA 2011. At 160mm in height and weighing around 610g for the cooler alone, Enermax’s ETS-T40 cooler range should fit perfectly in most mid tower and above cases. Enermax have also included an extra pair of fan clips for enthusiasts who want to unlock every ounce of potential from the ETS-T40 heatsink.

With a retail price of around £37/€35 for the Vegas Duo version or less than £30/€30 for versions equipped with different fans, Enermax could have a CPU cooler which brings the aesthetic appeal to the table, but leaves the extortionate price tag behind.