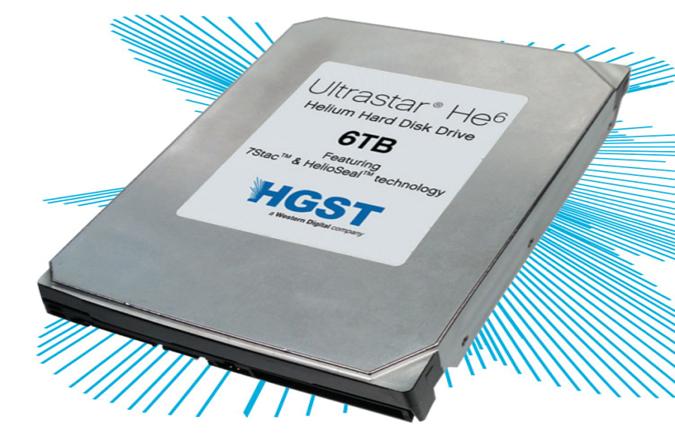 Hitachi started shipping the first drive to feature a helium filling, a concept it first unveiled back in 2012 as a means to boost capacity by around 40 per cent compared to traditional mechanical drives. The helium filling was possible by shrinking the gap between platters and fit seven platters into an admittedly chunky 3.5″ form-factor. With traditional air-filled high-capacity drives having only five which translates to a 40% boost in storage space.

The Ultrastar He6 has 6TB of storage into a single 3.5″ drive with a choice of SATA-III or SAS connectivity. As with the company’s prototypes, this impressive capacity comes from seven individual platters, although the drive itself is 50g lighter than the air-filled five-platter 4TB Ultrastar 7K4000 at 640g. The platters spin at 7,200rpm, are backed by 64MB of cache memory, and are designed for application loads of under 550TB a year.

According to HGST, the helium filling leads to a 23 per cent drop in idle power and 49 per cent improvement in watts-per-terabyte compared to traditional five-platter drives. The company also plans to use the HelioSeal technology in its future heat-assisted magnetic recording, or HAMR for short, drives to further boost capacities.

Finally, no news was released in terms of pricing, but given the new technology, it is expected to be a significant price range, well over existing 4TB models.

Thank you Bit-Tech for providing us with this information