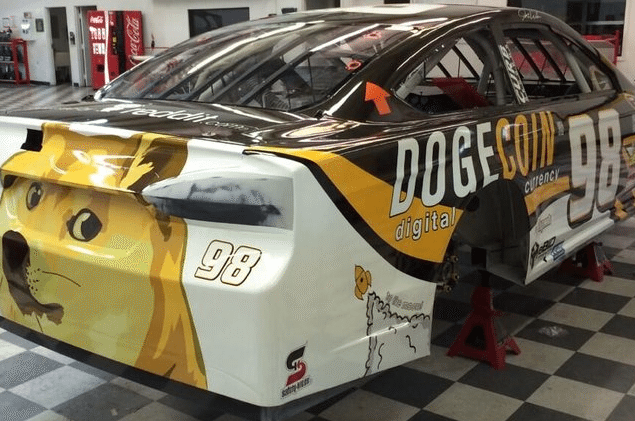 NASCAR driver Josh Wise was driving without sponsorship on his car, and when his fans as well as the /r/dogecoin community of Reddit caught word of this, they set about raising more than $50,000 to help him. Not only did they get people to donate their Dogecoins, but also ran a competition for everyone to help design the car, which is now the first crypto currency sponsored, meme covered car in NASCAR, awesome!

The 98 Chevrolet SS that Josh Wise drives will be featured in the upcoming race at Talladega Superspeedway on May 4th, sporting its new Doge colours. The “Dogecar” pictures were tweeted by Phil Parsons Racing yesterday, covered from front to back in the Shiba meme, as well as a tiny spaceship which we can only assume is going “to the moon”, Doge fans will understand.

If Wise gets enough support, the car could also head to the Sprint Cup Series All Star race, but only time will tell if he can make it.

It’s pretty crazy to see a meme now sponsoring a car, let alone a crypo currency, but it just shows what a community can do when they put their heads together.