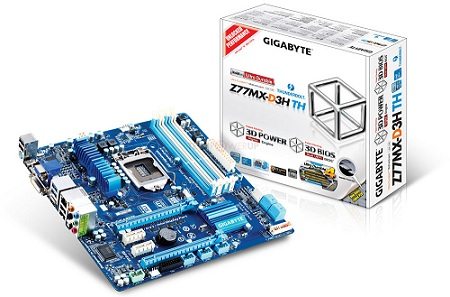 Gigabyte is the first motherboard vendor to bring to market a dual Thunderbolt Micro-ATX form factor motherboard. The The Z77MX-D3H-TH motherboard from Gigabyte (with the TH representing Thunderbolt) maintains the 240 x 240 mm micro-ATX form-factor and is based off Intel’s LGA 1155/Z77 combination. The board uses an Intel DSL3510L dual channel Thunderbolt controller to drive its two ports.

The two ports can support up to 6 devices through daisy chaining as well as providing display outputs that are routed to the Flexible Display Interface (FDI) taking display from the processor’s integrated graphics core. With the included Lucid Virtu MVP software, graphics processed by discrete graphics cards can be output though the FDI, and hence these Thunderbolt ports.

The LGA1155 socket on the Gigabyte Z77MX-D3H-TH is powered by a 6-phase VRM. It is wired to four DDR3 DIMM slots, supporting up to 32 GB of dual-channel DDR3-2400 MHz memory; and two PCI-Express 3.0 x16 slots (electrical x8/x8 when both are populated). Other expansion slots include a couple of PCI-Express 2.0 x1, wired to the PCH. All six SATA ports from the Z77 PCH (two SATA 6 Gb/s and four SATA 3 Gb/s) are assigned as internal ports.

Display connectivity, apart from the two Thunderbolt ports, includes one each of DVI, D-Sub, and HDMI. Other connectivity includes four USB 3.0 ports (two on the rear panel, two by headers), 8+2 channel HD audio, gigabit Ethernet, a number of USB 2.0 ports, and PS/2 mouse/keyboard combo port. The board is driven by dual-UEFI BIOS.

The Z77MX-D3H-TH is expected to retail at €150 which is €40 more than the “non-Thunderbolt” variant. Even though this may seem expensive, the fact that each Thunderbolt controller chip and port can be as much as $20 means this is still a reasonable buy.