Introduction and A Closer Look The GeForce GTX 960, NVIDIA’s newest graphics card iteration, has caused quite a stir in recent weeks. The release of the cards were delayed, bringing the actual release of these models to over 4 months later than their big brothers, the GTX 970/980. Research surveys taken from Steam has revealed that around 66% of gamers still use the equivalent of a GTX 660 or lower; this card will offer a simple plug and play upgrade with performance increases of up to 60%. The GTX 960 utilises the same Maxwell process technology that the rest of the GTX 900 family uses. This series has brought more performance with lower power requirements and in the form of the GTX 960, it has dropped all the way down to 120w while only using a single 6-pin power connector. Along with a lower power consumption, the new Maxwell process brings MFAA (Multi-Frame Sampled Anti-Aliasing), an exclusive for the GTX 900 family, this feature can deliver a 30% performance boost while maintaining the high quality detail we demand while gaming, ideal for gaming at high resolutions.

The version we have here is the Gigabyte G1 Gaming GeForce GTX 960. It features a revamped Windforce cooler, giving it a premium look and hopefully premium performance. Changing the plastic shroud to metal and an additional metal back plate to support the behemoth heatsink contained within; they have also changed the fan fin design to increase airflow by as much as 23% and reducing noise to under 20 decibels.

Gigabyte have given this new addition the same overclocking treatment as the GTX 970/980, giving it a 10% base and boost overclock to 1241 MHz and 1304 MHz respectively and increasing the TDP to 160W compared to the 120W standard, but with a 6-phase power design to balance load and to reduce temperatures, while also increasing product life. This increase power and 6-phase power design allows for higher stable overclocks and no throttling in intensive benchmarking sessions. 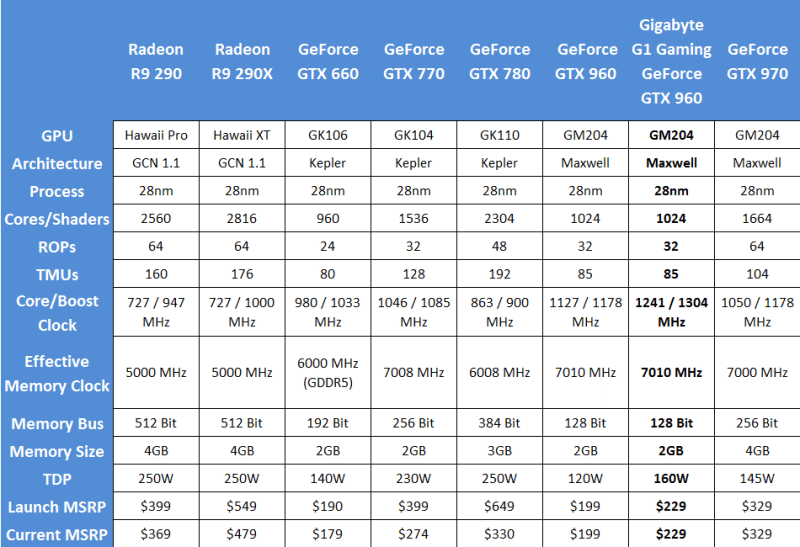 The packaging follows the same design as the other G1 Gaming series boxes with the key features along the bottom and the dominant Gigabyte ‘Eye’ logo giving additional colour alongside the NVIDIA green. Contents include a Quick start guide, driver disc and 2x molex to 6-pin GPU power adapter cables. 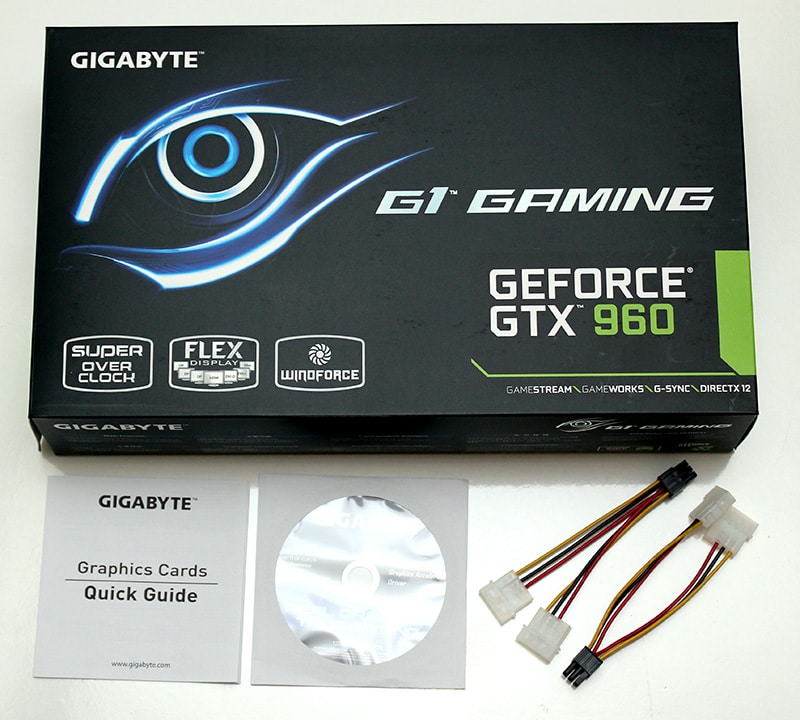 This card has a very demanding presence, measuring in at 312mm in length, it may prove a tight squeeze into some of the smaller cases such as the Corsair 250D. The brushed metal shroud with black opaque fan fins gives the impression that this card is here to do the business with no fancy gimmicks.

Along the bottom, we can get a first glimpse of the heatsink and see the size of the PCB, a fair size longer than its competitors. The shroud hugs the heatsink around the sides, with well-placed cut-outs to allow for increased airflow, while keeping the card rigid.

At the end of the card, you can see the protruding ends of the 4x 6mm copper heatpipes. The backplate here bends up to almost meet the shroud, maximising the dissipation of the hot air from the fans. 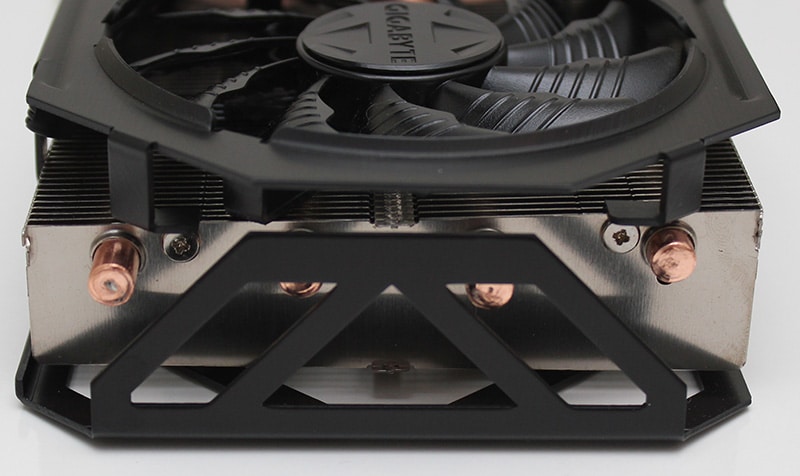 Looking down onto the top of the card, you get a better feel for the size of it. Matching the length of the rest of the G1 Gaming series, this will have no issue handling those intense factory overclocks. We see here the iconic ‘Windforce’ Logo which illuminates blue when powered on. This particular model has the ability to run passively under less intense gaming sessions and general use. On each side of the ‘Windforce’ Logo, there are 2 additional logos; ‘Stop’ and ‘Silent’ which also illuminate when the card is running passively. You can also see the additional 6-pin power connection that works towards the 6-phase power design. 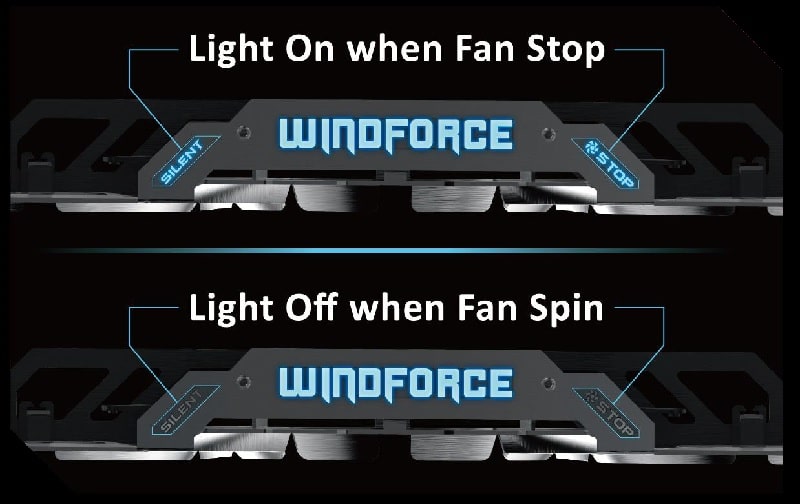 The back of the card follows suit to the other G1 Gaming styles. Mirrored cutouts aid rear ventilation and cooling of some of the rear mounted components. There is also a laser etched ‘G1 Gaming’ Logo and Gigabyte ‘Eye’ Logo, upside down, but that would appear the correct way up when mounted in a standard case.

Here you can see the vast array of outputs. 1x DVI-I, 1x DVI-D, 3x DisplayPort 1.2 and 1x HDMI 2.0. The HDMI port is able to support 4k resolutions at 60Hz. Used in certain configurations, you can utilise Gigabytes own ‘Flex Display Technology’. The technology allows the use of up to 4 monitors for multi-monitor displays. The easiest way of achieving this would be to use both DVI outputs, 1 x Display port and the HDMI port, but other configurations are available. 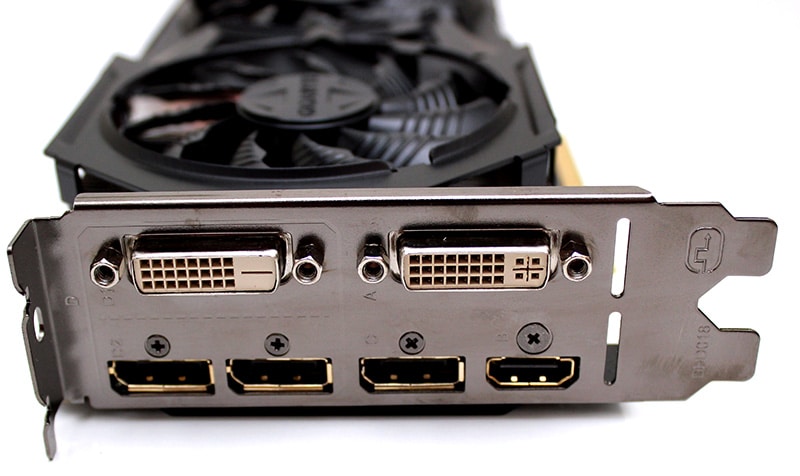