Not content with their Z390 AORUS Master motherboard, Gigabyte has prepared an even higher-end flagship unit. This is called the Z390 AORUS Xtreme and it packs plenty of high-end features for those who want only the best. For starters, it actually uses an extended ATX (E-ATX) form factor, just to fit all the extra features.

It has dual Intel Thunderbolt 3, an Intel Gigabit LAN and Intel Gigabit WLANport. Furthermore, it even has an Aquantia 10GbE LAN capability. Lastly, since it is an AORUS motherboard, it is also drowning in RGB LED lighting options.

What Other Features Does the Z390 AORUS Xtreme Have? 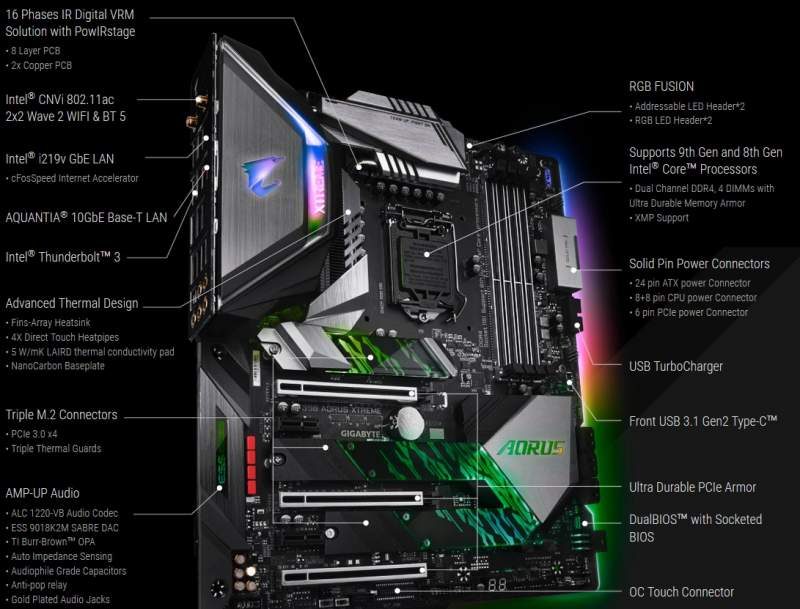 The Z390 AORUS Xtreme has so much features that it practically shames the Z390 AORUS Master. Which was already quite an impressive motherboard.

The VRM uses a 16 Phases IR Digital VRM with PowIRstage design and is comprehensively cooled by large heatsinks. These heatsinks not only look good but they are functional as well. It utilizes direct-touch copper heatpipes, Nano Carbon baseplates and aluminium fins which allows air to flow through.

There is an IO cover and an integrated backplate already in place. This of course, simplifies installation and there is absolutely zero chance that the user will forget to install the IO shield during case installation.

How Much is the Gigabyte Z390 AORUS Xtreme Motherboard?