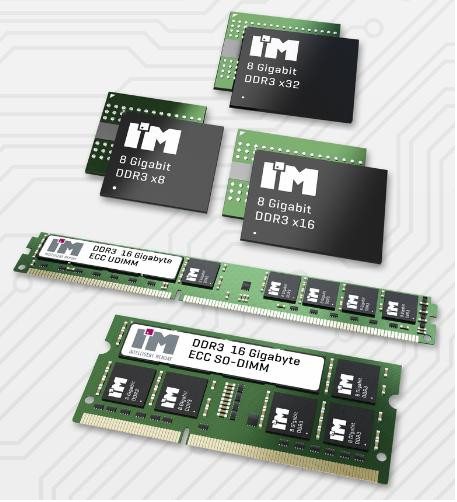 Hong Kong based DRAM manufacturer, I’M Intelligent Memory, has announced its 8 GB DDR3 components with a single chip, which doubles the amount of memory per chip compared to other DRAM devices on the market. Based on the latter chip, the company is said to have introduced the 16 GB DDR3 UDIMM and SO-DIMM memory modules, having EEC error-correction technology as an optional upgrade.

It is said that the JEDEC specification JESD9-3 has always allowed a 8GB capacity for DDR3 devices. However, it seems that most manufacturers are waiting for the 2x nm process in order to fit smaller chips and bring high memory capacity. I’M Intelligent Memory has apparently made the leap by developing their own way of manufacturing 8 GB DDR3 components with a single chip using existing 30 nm technology.

Given the 8 GB device, the company has released its first 16 GB DDR3 240 Pin unbuffered DIMMs and 204 Pin SO-DIMMs on the market, while also having them available in 72 Bit width for EEC error correction. The latter modules are said to be compatible with processors and micro-controllers from AMD, Cavium, Freescale, Tilera and others.

While not all processors used in desktop PCs are compatible with the high-capacity memory, Intel has offered support for the Atom C2000 series and Atom E3800 series with a new BIOS version available to download now. Also, ASUS has confirmed support for the latter memory on its X79-DELUXE, RAMPAGE IV BLACK EDITION and other ASUS X79 motherboards. Other manufacturers, such as ASRock, Supermicro, AIC and Portwell have already verified and approved the IM 16 GB DDR3 memory modules for a variety of their motherboards based on ADM, Tilera, Intel’s C2000 series and other processors.

I’M Intelligent Memory apparently has noticed the potential embedded markets, networking and telecommunication applications, as well as PCs and laptops, allowing all to reach a memory capacity previously untouched by any manufacturer out there.