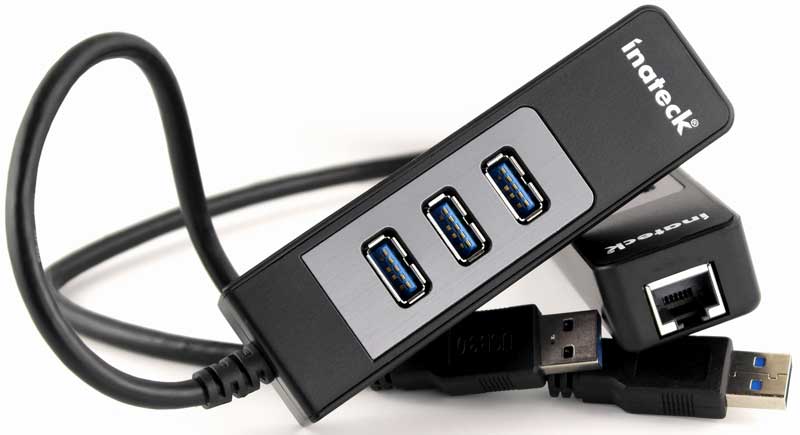 We’ve all run into this one particular issue at one point or another and that is where we have to work with too few USB ports. This is where USB hubs come into play and today I’m taking a closer look at two of them. On the test bench is the Inateck four-port HBU3VL2-4 USB 3.0 hub and the Inateck three-port HBU3VL3-4 USB 3.0 hub with Ethernet connectivity. Both of these new USB 3.0 hubs are aimed at netbook, notebook, ultrabook, tablet, and similar portable PC users and they reflect that in their size, features and portability. 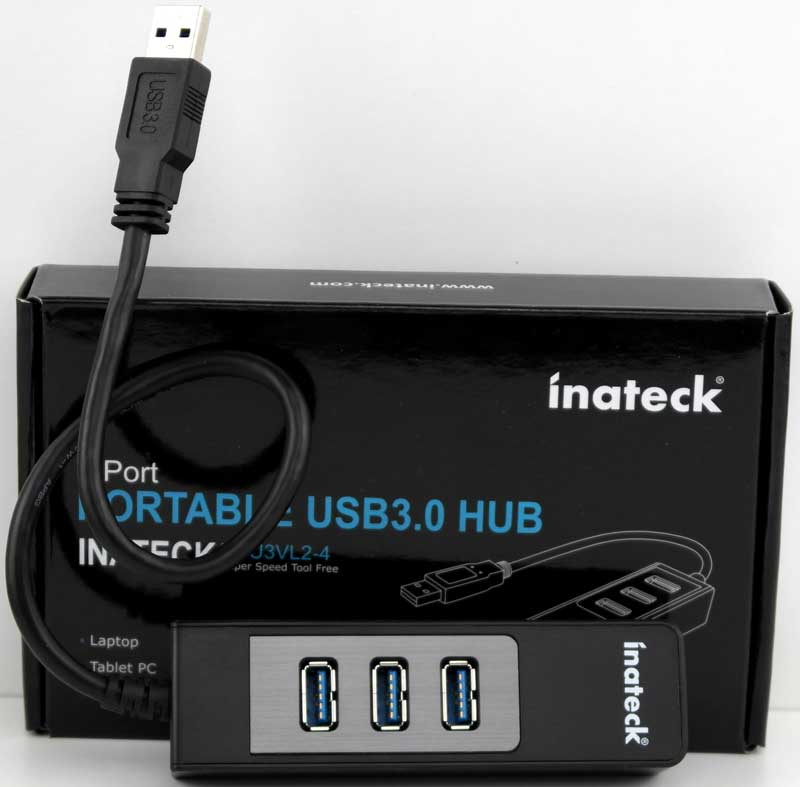 The Inateck HBU3VL3-4 and HBU3VL2-4 both feature the same basic design and are highly portable. They barely take up any space with their 110 x 32 x 20mm size and are lightweight enough to not notice in your bag at just 59grams. They are both passive powered units so you don’t need to carry around an extra and heavy power supply just for the hub. Perfect for users on the go.

The first of the two units, the HBU-3VL2-4 four-port USB 3.0 hub, comes with a short USB 3.0 cable so you can connect it without having meters of cable rolled up next to your laptop. It features three USB ports on top of the unit and one on the end. The one at the end of the unit is especially suited for bigger plugs and devices that would otherwise impair connectivity to the rest of the ports. Other than that, the four-port USB hub doesn’t feature much because there is no need for anything else. It has a sticker on the rear with the product and company names as well as the model number.

Being a passive powered unit does bring the benefit of not having to carry around an extra power supply, but it also means that there are a few limitations on what you can connect. The maximum power draw from connected devices can’t exceed 5V 900mAh. It would be tempting to use a hub with this design as a charger, but that isn’t recommended for passive hubs. But normal smartphones, flash storage, and input devices shouldn’t provide any issues at all. Inside it features the VIA VL812 chipset that should deliver more than enough performance, and I don’t expect to see much of a performance impact through its use. 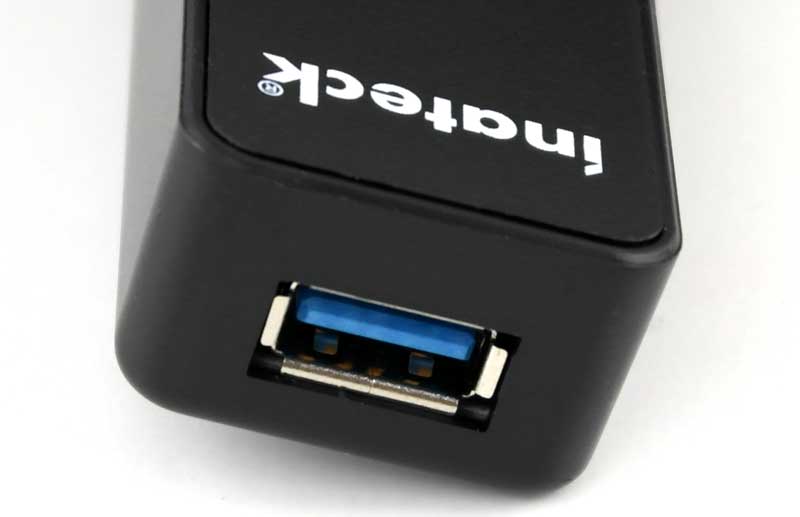 The second USB hub is a little more specialized and comes with one really cool extra feature, a RJ45 Gigabit Ethernet port. This could be particular useful for ultrabook and tablet users that only have wireless connections at their disposal. Just connect the Inateck HBU3VL3-4 to your system, install the Realtek drivers and enjoy the benefits of a cabled connection. 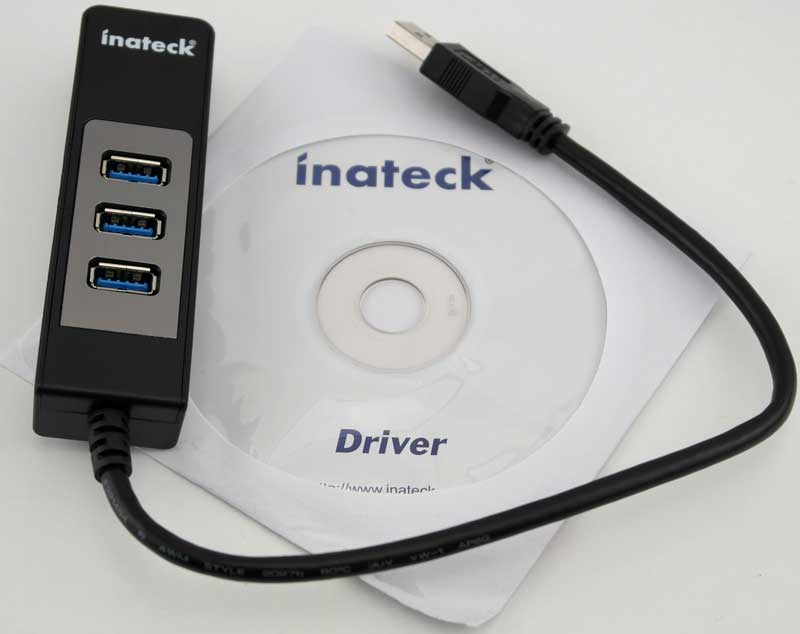 The Inateck HBU3VL3-4 looks just like the 4-port hub we just saw, but it only features the three USB 3.0 ports on the top. The fourth port at the end has been replaced with an RJ45 Gigabit Ethernet port. This is really awesome and thanks to Inateck’s use of a Realtek RTL8153 chip inside, I expect to see solid performance here. 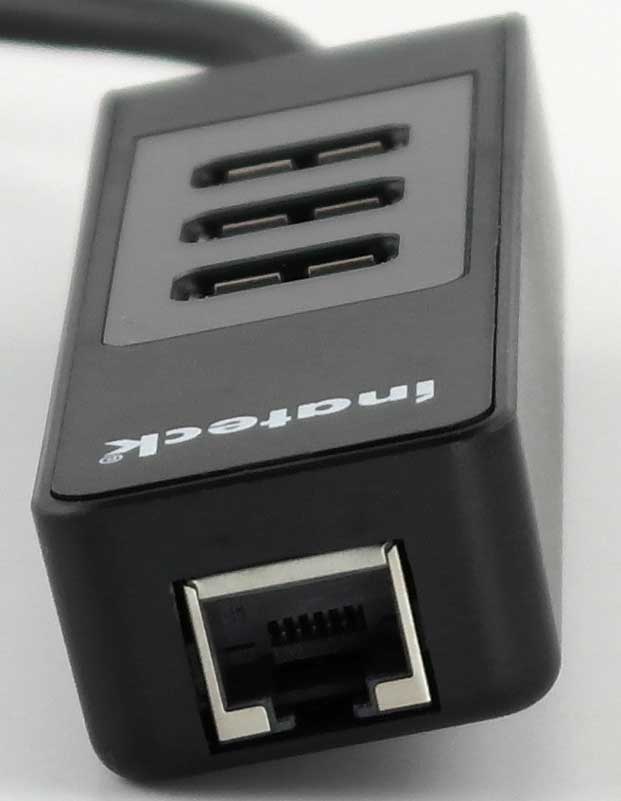 If you choose to download the drivers for the LAN port instead of using the included driver disk, make sure you download the right one. There has been a revision in the product, but it can easily be identified by the sticker on the bottom. The download page will also warn you about this and guide you to the right version. This is well done and something I wanted to point out, I like when a company makes everything as easy as possible. One is identified by a serial number sticker while the other has the mac address on the sticker.