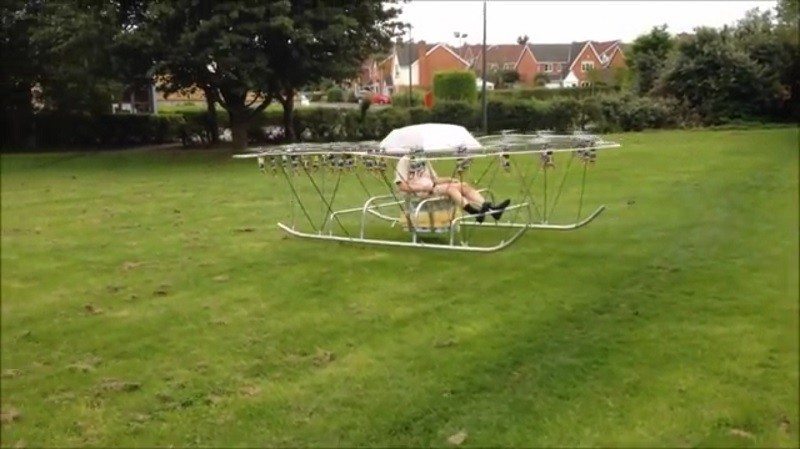 Recently I wrote an article concerning an individual who thought it would be quite interesting to fly a drone into the stands at the US open Tennis tournament. This was a bad example of how to implement drone usage, this example below is a crazy yet fantastic example of how to use drones in a creative manner, a gentleman who goes by the YouTube moniker gasturbine101, as you do, has managed to construct a helicopter out of 54 drones and a garden chair.

You know you would like to see it, below is the video, as you can see its pretty crazy to say the least, imagine flying this past your next door neighbours bedroom window at 5am in the morning, they will feel as if they have been on the Jack Daniels all night.  This contraption is powered by four cell batteries and the estimated cost of construction has been around the £6000 mark.  oh and, if it looks like a machine powered by drones and fly’s like a machine powered by drones then the name would be? Yes you guessed it “The Swarm Manned Aerial Vehicle Multi-rotor Super Drone”.

For those who like detail then Gasturbine101 states that he used 54 counter-rotation propellers, six grouped control channels with KK2.15 stabilization. The off weight is around 148kg, max lift, approx. 164kg.  The Endurance is 10 minutes and Power is approximately. 22KW.

With a lot of tinkering this invention could be quite revolutionary, the only slight thing is that I would be concerned about my head if I sat hovering in one of these, if an incident happened then your head is not a million miles away from those propellers.  gasturbine101 also states that the craft might “need a tail rotor for spot turns.” it’s certainly a stunning piece of kit which might bring personal transport devices one step closer to reality, especially if a sizeable company adopted and invested in this notion with the aim of developing it for consumer use, iplane of Googlehover. 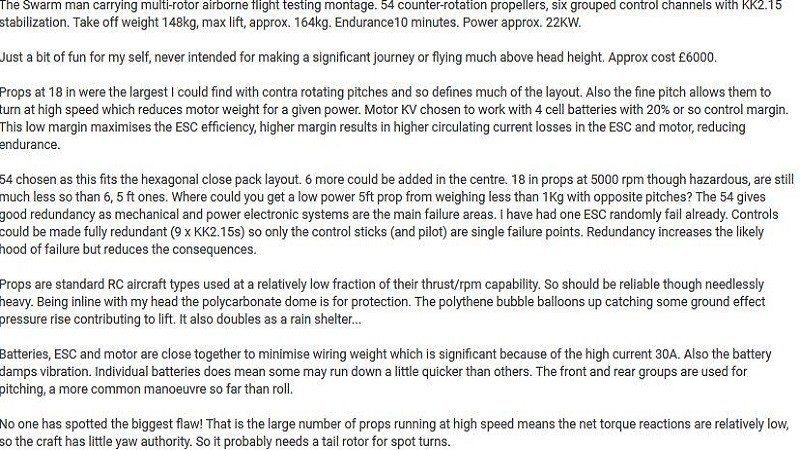