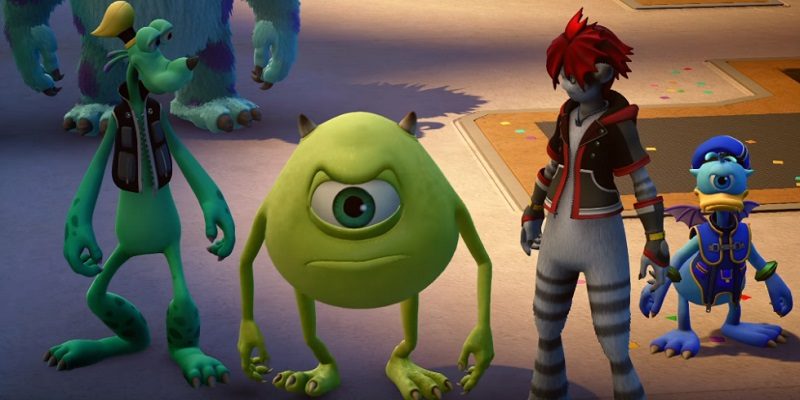 For many, Kingdom Hearts is a much-loved series. In recent years, however, all fans have had to play are slightly updated versions or HD re-releases. The game series, which includes characters from the Disney and Squire Enix franchise in an RPG setting provides what is, quite literally, the best of both worlds.

To present, there has been very little news on the third game. In a surprise release, however, we have been given 2 new trailers for the game. In addition to this, they have confirmed that Monsters Inc will be a part of Kingdom Hearts 3 and will even have a playable world.

While the earlier Kingdom Hearts games seemed to concentrate more on the ‘classic’ Disney elements, Kingdom Hearts 2 saw the game embrace some of the more modern classics. It would seem that Kingdom Hearts 3 wants to expand on this further with the trailer suggesting that characters from Toy Story and Monsters Inc. will be a key part of the new game.

Our thoughts on the videos

Firstly, the music video above “Don’t Think Twice” will be the main theme for the game and I must say, I am impressed. The full trailer below, however, reveals a lot of really good things. Even my wife who was sat about 10′ away slowly started creeping towards my PC, innocently asking what it was.

I’m sure that both fans and newcomers to the series will be interested to see where this game goes.

When is it released?

Hard to say. We are hoping for a release this year, but nothing, as of yet, has been confirmed. A report via DigitalSpy suggests that a release date may be confirmed at this years E3.

While Kingdom Hearts 3 is expected to release on PS4 and Xbox One. Alas, a PC version is, at present, unclear.

What do you think? Are you a fan of the series? Like what you’re seeing from the new game? – Let us know in the comments!