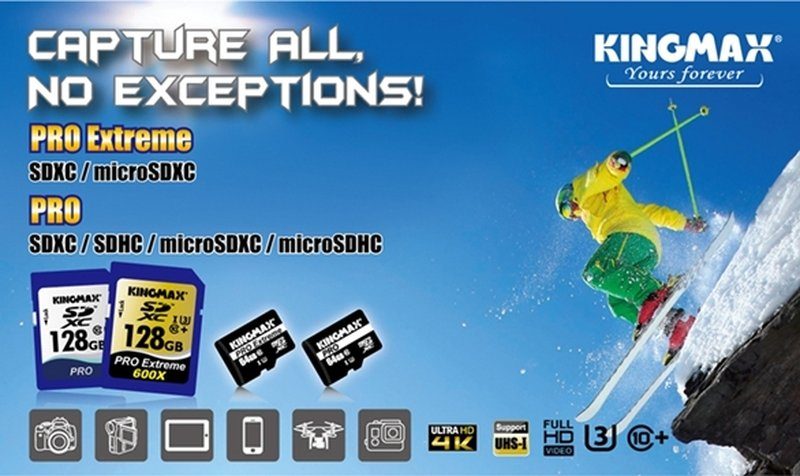 While there is absolutely no shortage of available memory cards, it can’t hurt to have more to chose from. More competition equals progress in the field and a lower cost for the consumer. As such, it’s nice to see Kingmax launch two new memory cards, the Pro Extreme and the Pro series.

Both the Kingmax Pro Extreme and Pro series come as SDXC and micro-SDXC cards, allowing for a usage in pretty much any modern device that accepts memory cards. Whether you should pick the full sized SDXC or the micro version depends on which cards your device accepts. The full sized version does have the benefit of up to double the capacity.

The pro series is a Speed Class 3 memory card dedicated to 4K2K and 3D photography, allowing customers to record the beauty they encounter with their drones, sports cameras, action cameras, and other devices. The cards can deliver a transfer rate of up to 90MB/s and capacities of 64GB, 128GB, and 256GB.

The Extreme Pro series didn’t come with any speed rating in the press release, except that it offers “new and faster reading and writing” experiences. That points to even faster speeds than the normal Pro series and it’s probably why it’s called Extreme Pro. The series is built for fast continuous shooting functions for users of such high-end equipment as D-SLR, D-SLM, and digital cameras.

Both series are waterproof, shock-resistant, heat-resistant, and got anti-static protection, ensuring that your captured moments stay safe on the card. Each Kingmax memory card has also been tested and checked to ensure the highest stability and compatibility. The cards come with equipped ECC debugging and an advanced Wear Levelling function which distributes image data more evenly.

The new Pro and Pro Extreme SDXC/microSDXC memory card will be rolled out in various countries very shortly.