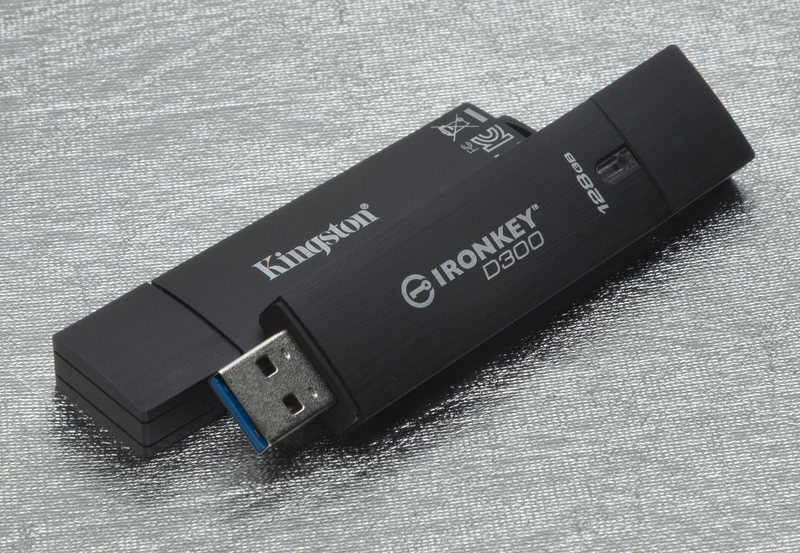 Kingston announced the release of the IronKey D300 and the IronKey D300 Managed encrypted USB Flash drives. Both drives deploy an advanced level of encryption that builds on the features that have made IronKey such a well-respected name when it comes to safeguarding sensitive information, a technology that Kingston acquired earlier this year.

The IronKey D300 is FIPS 140-2 Level 3 certified and uses 256-bit AES hardware encryption in XTS mode. That on its own is already a great digital protection, but data also need to be physical protect and Kingston didn’t leave that out. The drive’s exterior is made with a zinc casing and is waterproof in up to 4 feet water, while the interior components are encased in a tamper-evident epoxy seal.

IronKey D300 employs digitally signed firmware, making it immune to BadUSB malware, and it enforces complex password protocol with minimum characteristics to prevent unauthorised access. Encryption and decryption is done on the drive with no trace left on the host system, and the drive locks down and reformats after 10 invalid attempts to protect against brute force attacks.

“We leveraged Kingston’s history of delivering high-quality Flash memory products with IronKey’s trusted reputation in the encrypted storage industry to create a strong, reliable USB Flash drive that will last for years to come,” said Valentina Vitolo, EMEA Flash business manager, Kingston. “Our goal is to make IronKey D300 available to more organisations than ever before. Customers who need managed and/or non-managed encrypted drives will find IronKey D300 to be the most up-to-date, affordable and cost-effective solution to deploy in their workplace.”

The IronKey D300 managed drive is pretty much the same as the above-mentioned D300, but it requires IronKey EMS by DataLocker which allows central management of drive access and usage across thousands of drives. IronKey EMS is a flexible management solution as it can be either cloud-based or used locally. It enforces drive-specific policies such as password strength and retry limits, and lets administrators remotely disable lost or stolen drives, recover lost passwords and more.

Both drives are available in capacities from 4GB to 128GB and with a performance up to 250 MB/s reading and 85 MB/s writing. Both drives are compatible with both Windows and Mac OS systems and the non-managed will also work with Linux – so there is one for everyone.