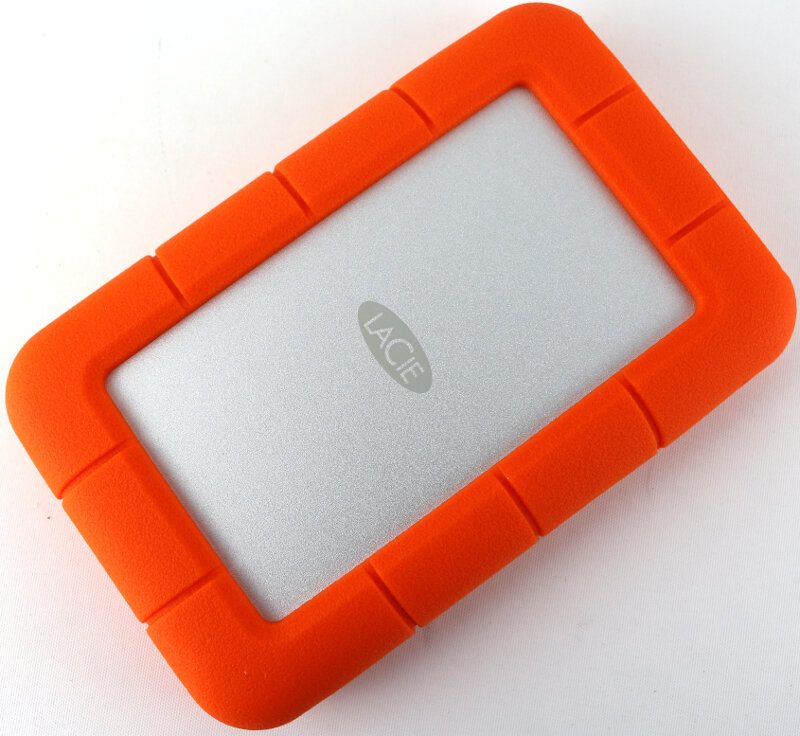 There can be multiple reasons why you will want your portable storage drive to be a rugged one. You might be on the road a lot for business or pleasure or perhaps you are just a clumsy user who tends to drop and spill things. You might also just want that extra layer of protection for your valuable data, just in case. Whatever the reason might be, LaCie’s Rugged series could be just the right drives for you.

There are a lot of different drives in this series and LaCie has already shipped over 4 million of them to satisfied users. Today I’m taking a closer look at the newest Rugged family member which features a multitude of connection options and it is also available as both an NAND-based SSD version as well as a mechanical HDD version. Today’s review features the 2TB HDD version of the LaCie Rugged Thunderbolt USB-C drive. 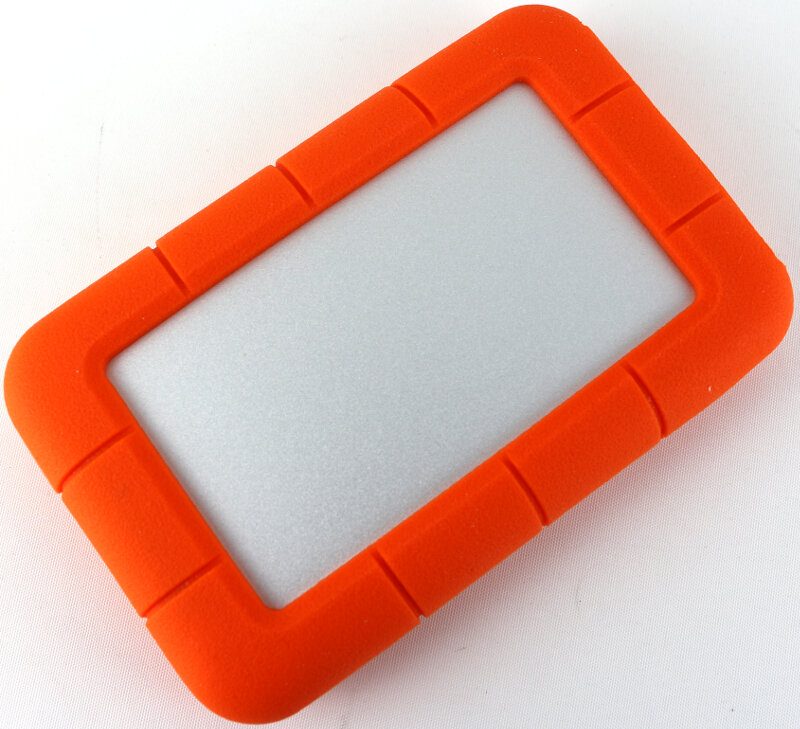 It won’t be any surprise if the design looks familiar to you. That could either be because you’ve seen one of the previous models in the series, which all resemble this one. Maybe you also recognise the design elements from other products designed by the same person. The LaCie Rugged series is designed by industrial product designer Neil Poulton. His designs have won countless awards, including the prestigious IF Design Award and the Red Dot Design Award on multiple occasions. Neil Poulton specialises in the design of ‘deceptively simple-looking mass-produced objects’, and this Rugged series is no different.

Despite a simple-looking design, the LaCie Rugged series is as versatile as it is useful. The rugged part comes from its resilience against elements. It is IP54 rated which means that it is resistant to both dust and water. While the IP54 rating isn’t the best, it will protect your drive from dust as well as water spray from any direction. It will survive drops from a height of up to 5 feet/1.5 metres and it can withstand being run over by a 1-ton car. It might get some visible damages, but the drive itself will withstand it.

The versatility of this drive doesn’t stop with its resistance against elements and users own stupidity such as spilling drinks over it, it is also connectable to pretty much any system. It comes with a Thunderbolt cable built right into the drive, but it isn’t limited to that. It also features a USB-C port where you can connect one of the two included cables. With those, you can connect it to USB-C ports, both USB 3.1 and Thunderbolt 3, but also traditional USB 3.0 and USB 2.0 ports. With all these options, there really aren’t many systems that you can’t connect it to.

I am testing the 2TB HDD version today which is the largest option in this version. There are 500GB and 1TB SSD options too which will provide faster transfer speeds instead of the larger capacity of the HDD version. Naturally, the SSD versions are faster and they are the ones that truly can take advantage of the Thunderbolt 3 and USB 3.1 capabilities, but that doesn’t mean that we should discard the HDD option as inferior – because it isn’t. Just different.

Inside this rugged enclosure is Seagate Barracuda drive for great reliability and performance. These drives feature Multi-Tier Caching Technology (MTC) that help improve application load time, and there are 20 years of manufacturing expertise behind the drives. It is a 2.5-inch sized HDD which does bring some limitations in regards to speed. But in return, the entire things can be bus-powered even on a USB 2.0 interface. A great feature on a portable drive as it means that you don’t have to carry around a bulky power adapter and you don’t need to be near a power outlet to use it either.

There aren’t many surprises when it comes to the LaCie Rugged’s packaging; it looks like we would expect it. The front shows how the drive looks as well as the main features such as connection options, capacity, and performance rating. 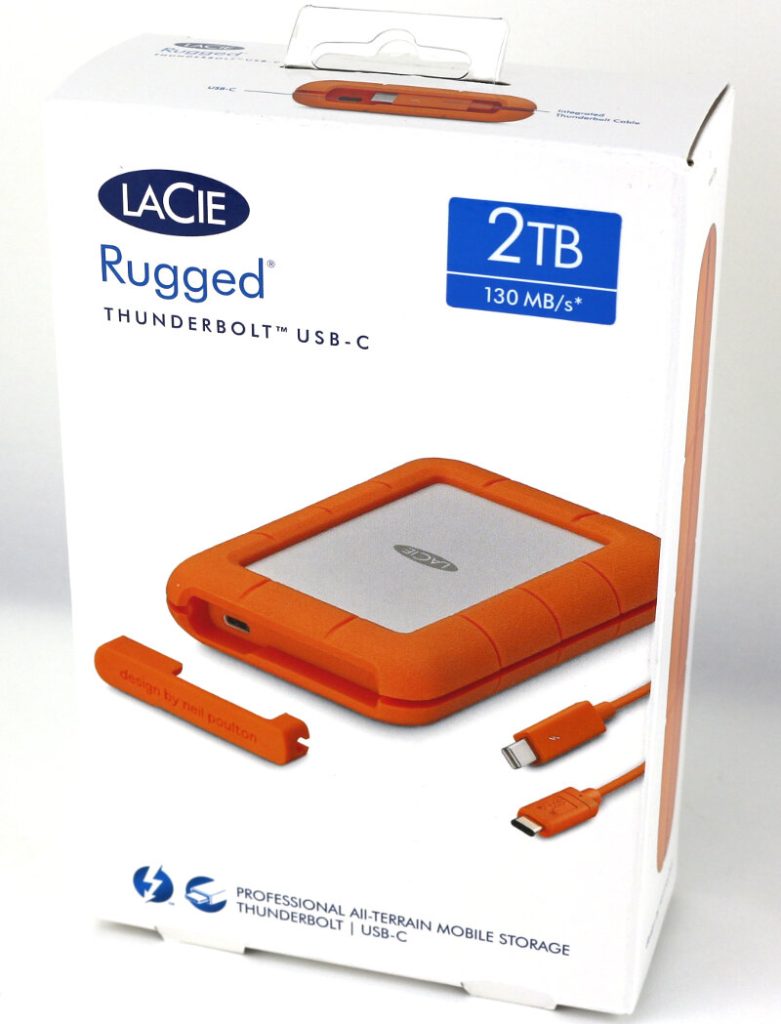 The rear has more details on the connection options and the ruggedness. 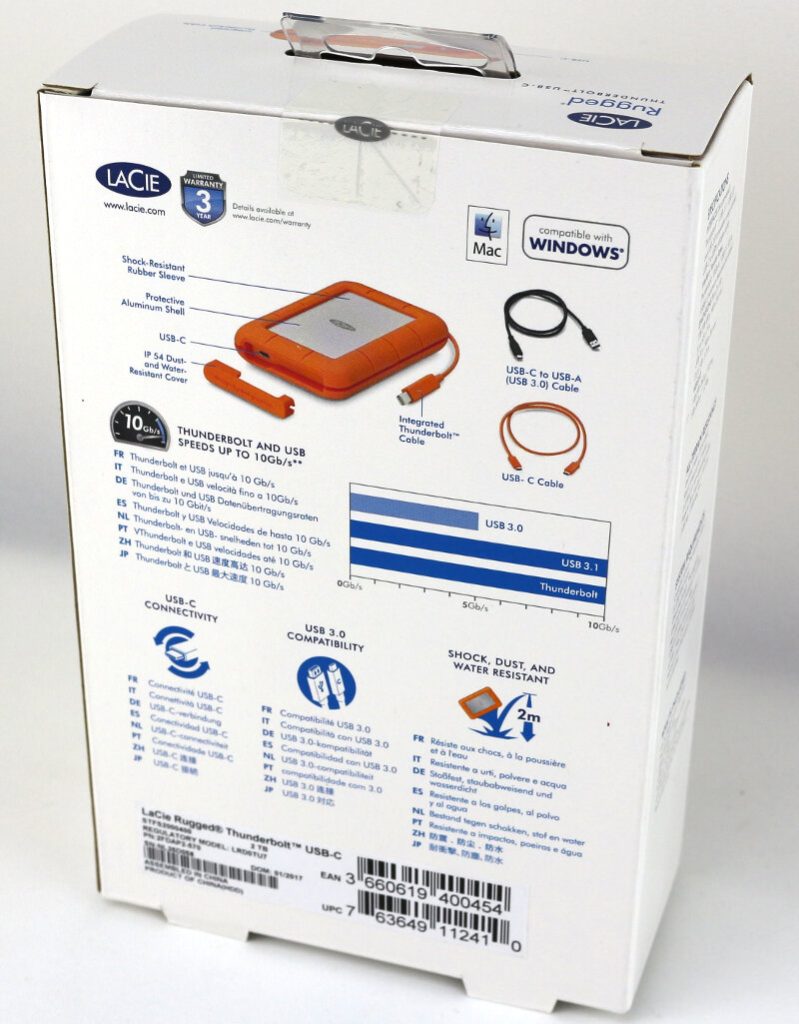 Inside is a smaller box with the accessories that also explains how to connect and initialize the drive. 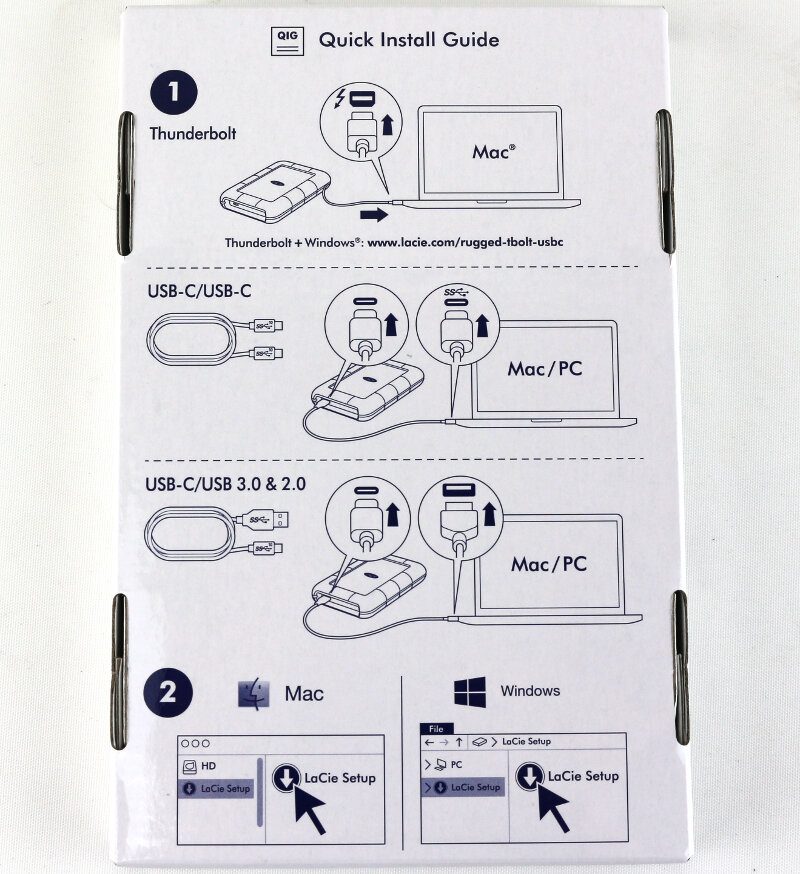