New leaked slides courtesy of Informatica Cero via VideoCardz.com show an interesting roadmap outlining the future of AMD products. The first slide shows a roadmap for both desktop CPU and APUs for 2017, 2017 and 2019. Bristol Ridge and Raven Ridge for the APU are known, but this slide reveals that the next APU evolution goes by “Picasso” and is refreshing the Raven Ridge architecture. Surprisingly, it retains compatibility with socket desktop AM4. It also uses the same socket FP5 for notebook as Raven Ridge. The desktop equivalent goes by “Matisse”, also using the same socket AM4 following the Pinnacle Ridge refresh.

Another slide shows the next Vega 20 GPU, although it does not indicate much features. What it does show is that it will be on PCIe Gen4 unlike Vega 10 which is on PCIe Gen3. This is likely just a refresh of current Vega 10 GPUs on 12nm LP fabrication process. 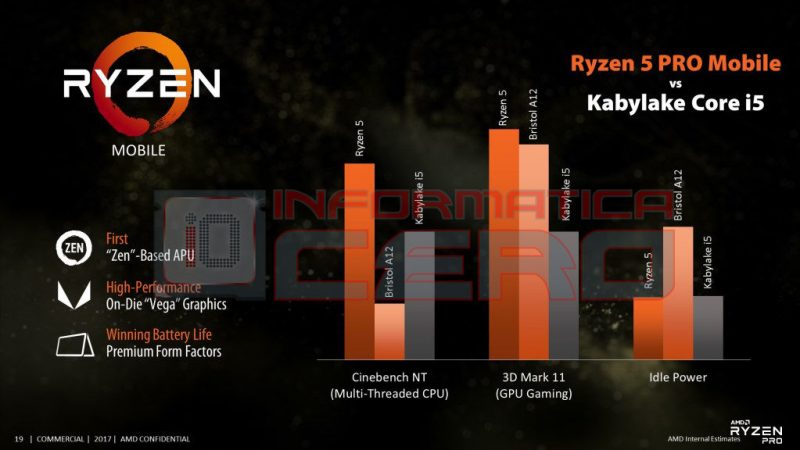 This last slide is interesting as it actually shows performance comparison. Although it lacks solid numbers which means the graph is unreliable. If it scales, then the Ryzen 5 Pro mobile performance actually outperforms Kabylake i5 in multi-threaded CPU performance. Due to the Radeon GPU, it also handily beats the Kabylake i5 in GPU gaming which is within expectations. The last graph is for idle power and shows that AMD may finally have a contender for notebooks. It shows a hair better than Kabylake in idle power consumption, which is useful for mobile since it correlates to battery drain.