LEDs can transmit data up to 800 Mbps

While this may sound slightly ludicrous, using LED’s to transmit data is an old and rather tried and tested method, which has bee proven to work thousands of times, in fact I’ve personally used LED’s in a Physics lab to transmit music over a distance of up to 5 metres. However, some German researchers have taken it just a step further and have set a new record in the process.

Recently, German researches from Berlin’s Fraunhofer Institute for Telecommunications managed to set a remarkable speed of 500 Mbps which is by far a new speed record (record stood at 200 Mbps), and they believe it can easily be improved to 800 Mbps.

While there may be some fairly obvious flaws, this technology is ideal for using on planes and in hospitals where Wi-Fi signals may interfere with sensitive electronic equipment. Unfortunately, any adoption of a Visible Light Communication system is a few years from being commercially available, but is certainly much more a reality than you might think.
One obvious barrier with this new technology is the fact that it can be easily blocked by opaque objects, and as such its never going to replace the wireless router in your house, but there are many environments, including offices where this system could deliver exceptional speed. Also using this technology cuts down on a lot of equipment and of course the signal can’t be intercepted ‘outside of the building’ – or at least if you shut the blind – and on top of that, converting to a LED ultra-fast network would be unbelievably cheap compared to a similar system. 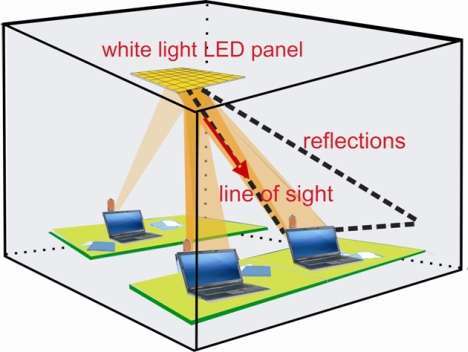 Accoording to ISPreview, costs of converting LEDs into ultra-fast networks are also very low, making it an affordable alternative to conventional networking systems, ideal in environments like offices where lights are perpetually turned on.