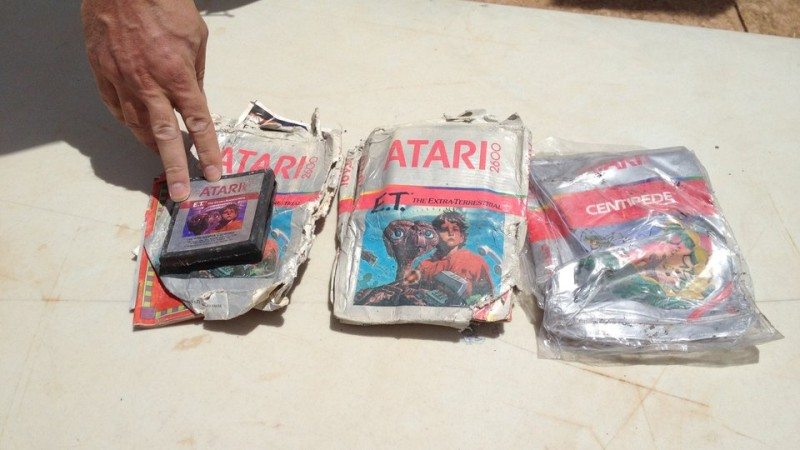 There are many legends in the video game industry,but none of them are as grand as Atari E.T. legend. The game was terrible, but ATARI was so confident of themselves that they over paid for the licence to create it and produced vast quantities of the cartridges. So bad was the fallout from this game when it launched, that it was blamed for the console gaming markets collapse which follow less than a year after the games release. Which makes me wonder why the music industry isn’t in ruin after Justin Beiber released his first album… strange.

ATARI was losing vast amounts of money when the game failed to sell and the rumour, turned legend, turned myth, was that ATARI secretly buried tens of thousands of copies of the game in a Mexican landfill. A year or so ago, a team went to Kickstarter and had hopes of setting out on an epic expedition to uncover the truth of ATARI’s hidden shame, and today they turned up quite a surprise. The contents of the dig site have been lost to history for over 30 years, but as you can see from the picture above, the team have uncovered evidence of the buried content, which appears to contain Centipede, not just E.T.

Atari paid millions to get the rights to the movie for their game, and ended up creating one of the (if not THE) worst video game ever to grace our screens! So bad that some have suggested the games should be left buried. However, what was once a myth is now confirmed as a true piece of video game history and you’ll be able to find out even more in the coming months as the team releases their official documentary of the trip.

Thank you Polygon for providing us with this information.