Since the launch of Apple’s world-renowned iPad a few years ago, the way in which we interact in our digital lives has been revolutionised to the point where we now feel lost if we can’t get online; whether it be for social or entertainment purposes or for business use in multitude of ways. Before tablets were around with such a presence as they are today, laptops and desktop computers was the only real way of getting online as even the world of smartphones was in its infancy, just before the iPhone was released.

Since those historic days when the first iPhone and iPad went on sale, the work of mobile connectivity through tablets, smartphones and now today’s Ultrabooks has advanced in leaps and bounds taking us into a world that only a few people could have imagined before. In today’s world and within the marketplace there is are so many different tablets and smartphones on offer, it is almost impossible to list all of them; from the market leading models right down to the rock bottom basic devices that cost very little to get hold of. It’s easy to say that if you want to get a tablet or smartphone, the chance of getting a device that suits your taste is very strong and this is why they are now more popular than we would have thought only a few years ago.

Like every other part of the technology world, the tablet market has devices at virtually every price level and whilst there are loads of people who are willing to buy the latest iPad for upwards of $500 / £400, this price is way over the top for another large group of users and this is where the Android based tablets come steaming through. At only a fraction of the cost, but still offering some of the best features on the market, it is no surprise that the Android operating system is the OS of choice on a large number of top-selling products out there.

Whilst I can spend all day talking about the best devices out there to go for, cost is still an issue to a number of users, and even £300 is bit over the top and this is also the case fo devices that are just over the £200 barrier. Fortunately this is where Android comes through once again with devices even available for around the £100 mark. The tablet that I’m having a play with today falls in to the entry-level to mid-range group of devices and at around £170-180 it is considerably cheaper than the latest iPad mini, but it still has all the features that we would expect to see on a tablet on offer, just for a more bite-size price.

As highlighted above, Lenovo are one of the biggest names out there when it comes to tablets and the band is also well know throughout the laptop market, with the ThinkPad being one of the most successful product lines that they have ever had. More recently Lenovo have been brought right into the limelight with the release of the Yoga 2 Pro  – a touch screen laptop that has four different modes in which it can operated, as demonstrated on a series of TV commercials. Besides the ThinkPad product family, the IdeaTab group of products has been created to offer users the best games, music and video whilst staying very much affordable. The IdeaTab family is then split into two smaller groups with the A-series for totally entry-level devices with the most affordable prices and the S-series for a slightly higher price with enhanced multimedia features, sleeker designs and better displays.

The IdeaTab S6000 as one will easily guess is part of the higher performing products in the IdeaTab range, although it is still an entry-level to mid-range product. As seen on the specifications below, the S6000 has all the key assets that we expect to see on a tablet and starting at £179 for a 16GB model, is considerably cheaper than some of the top selling tablets. 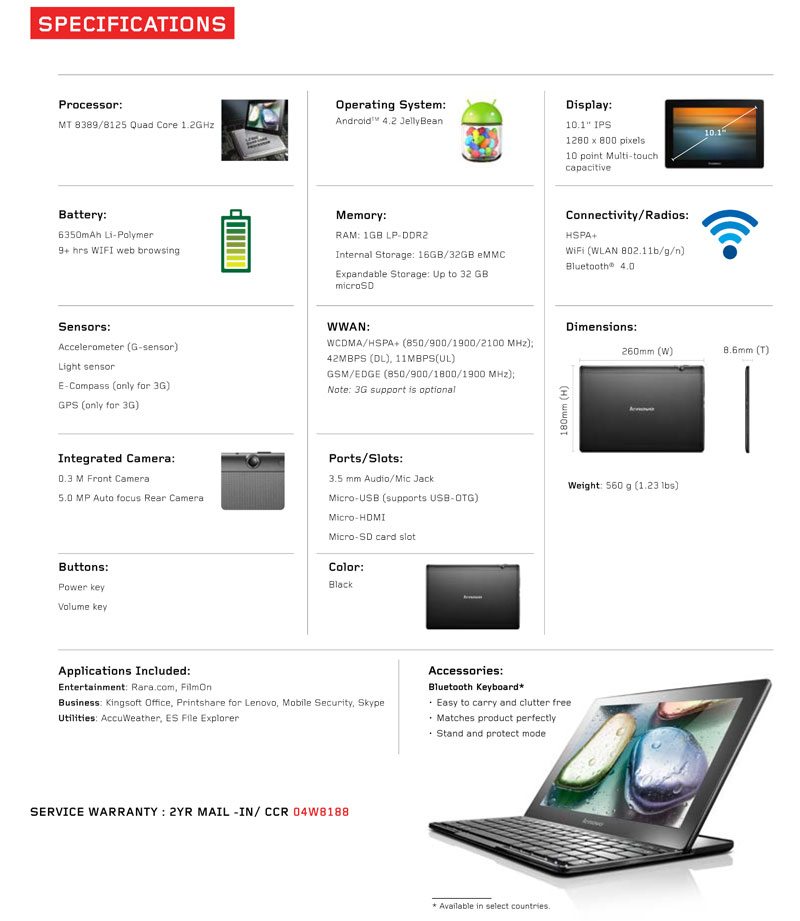 Inside the box alongside the tablet we get a typical set of accessories for a mobile device such as the S6000 with a micro-USB cable and mains power adaptor for charging the tablet – although any powered USB port is enough to charge the IdeaTab from. On top of that there is a couple of bits of paperwork for reference by the way of a quick start guide and warranty manual. 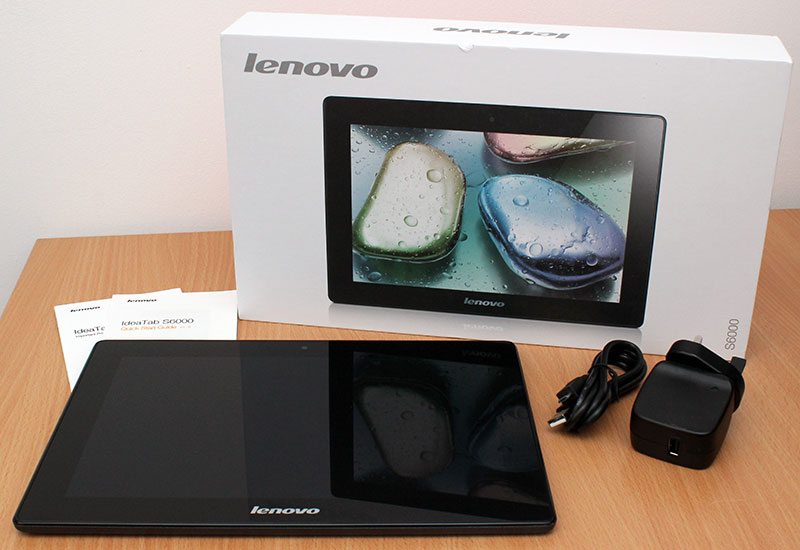 On the back of the box, Lenovo list the full specification of the S6000 and we can see that it comes with a quad-core ARM Cortex-A7 with a variable clock speed of up to 1.2GHz, 1GB of RAM and 16GB of flash storage topped off with 802.11b/g/n wireless, Bluetooth v4.0 and a 1280×800 10.1″ IPS panel to seal everything in. The IdeaTab also comes with Android 4.2 Jelly Bean as standard. 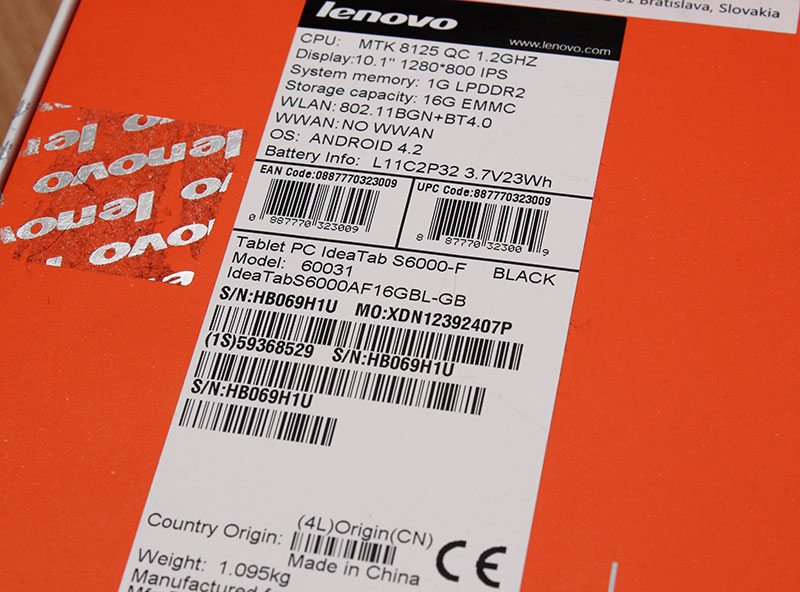