In the world of flash storage, there is a multitude of big names on the playing field and for those who hold the highest reputations, they are either built on a long standing existence for example Sandisk and for some other vendors, the reputation they have built up from producing high quality products. Lexar is a company that in a sense falls into both categories and built as a spin-off company from Cirrus Logic in 1996, Lexar started off in developing flash controllers. Further down the line, Lexar was overtaken in ownership by Micron in 2006 and has since then been merged with Crucial as a subsidiary of Micron. Since then there has been a long line of flash storage products roll off the production line with the Lexar branding and moving forward to today we have the fastest and best looking flash drive that they have ever made.

The P10, as mentioned is quoted to be one of the fastest flash drives available to buy at this moment in time, offering up to 24x the performance of USB2.0 drives, The drive also features a sleek metal alloy body and come in capacities ranging from 16-64GB as it headlines Lexars USB flash drive lineup.

The JumpDrive P10 comes in a rather bulky pack when compared to other flash drives that I’ve looked at, however it does look rather sleek with its all black appearance with white writing printed on the front. Lexar are keen to show off not only the drives capacity, but also its expected read and write speeds. When it comes to the high-street retail channels, getting lots of information on to the front of the pack is key when trying to maximise sales. The clear packaging also gives us a full on view of the drive itself. 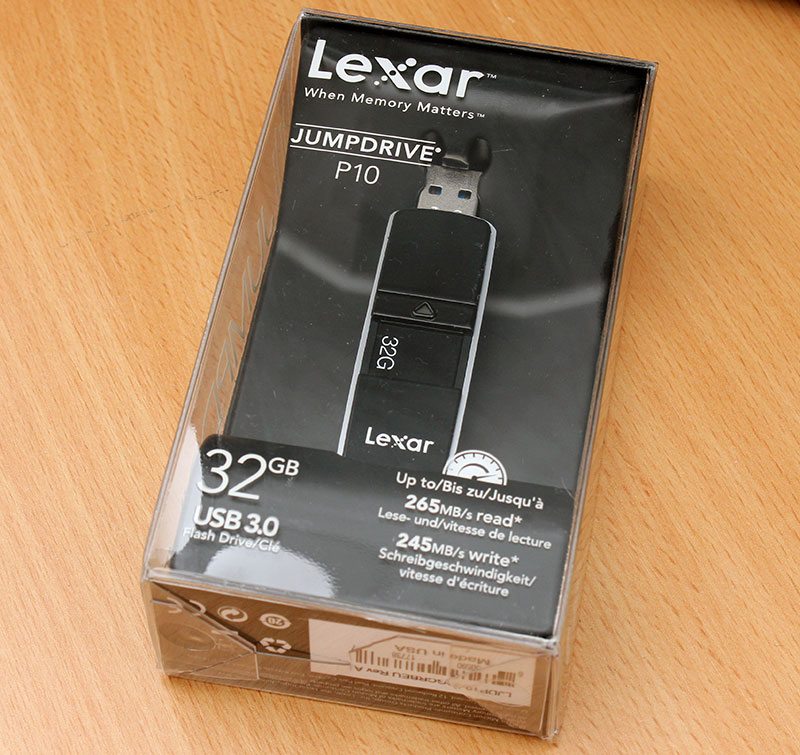