McAfee was able to patent a new technology which prevents an end user from accessing pirated content such as music, movies, games and softwares. This will be implemented in the existing SiteAdvisor tool which will now be used to detect and block websites where you can gain access to pirate material. 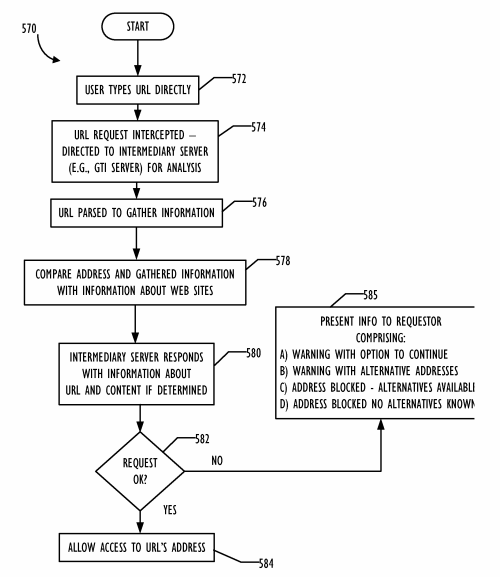 The patent is titled “Detect and prevent illegal consumption of content on the internet.” which shows a blocklist type systems which will either warns its customers, block the websites’ access or offers the legal option.

McAfee reason in doing so? It will help the consumer to stay away from unauthorized content and educating consumers on how to make the legal choices when they want to consume entertainment online, and helping from potentially facing a lawsuit from the content’s owners. But this will most likely please copyright holders since trying to convince search engine companies and internet service providers to stop from accessing such content didn’t go as they would hope. Whether this will work effectively or not, or if this would make not to use McAfee is entirely another issue.

McAfee has this solution embedded on SiteAdvisor Tool which will be for individual customers and for business clients. This works by detecting illegal content in search engines and puts up a warning label. But this also works in social networking sites such as facebook, basically the same way how browsers like Firefox respond to websites infected with malware or any malicious codes.

The company says,“One major reason for concern is a possible violation of an Intellectual Property right and the potential cost ramifications associated with such a violation. A second major concern could relate to potential threats cause by some unauthorized distributions. For example, it is not uncommon for an unauthorized distribution of material on the Internet to include malicious material.”