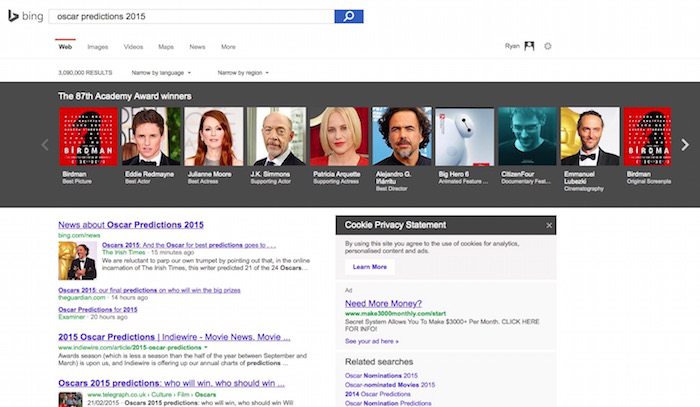 For the Oscars, the World Cup, Super Bowl and many other famous competitions, a lot of people and even animals like to predict the results. That has included octopuses, dogs and more dogs. Well Bing, the search engine from Microsoft, correctly predicted 84% of last night’s Oscar winners.

Bing correctly predicted 20 of 24 winners, including all of the big name awards such as best picture, director, actor, and best actress. Microsoft researcher David Rothschild is in charge of Bing’s predictions, using a prediction model that has been pretty successful before, correctly predicting 21 of 24 Oscar winners last year and 19 of 24 in 2013.

Leading up to the awards, Bing provided its latest predictions on the site for those who asked for them. It appears that Microsoft is making its predictions a regular thing now too, taking to English football results and last year’s World Cup.

Although Bing can’t top Google, it can certainly do a better job than these animals.