From a visuals standpoint, the MSI GT62VR 7RE Dominator Pro is identical to other Dominator machines as the revisions made are underneath the frame. Honestly, it makes sense to use the original, tried and tested design which is suitable for high-end configurations. Even though the Dominator chassis is a little on the thicker side, it’s extremely well made and doesn’t exhibit any flex. Personally, I quite like the chunky aesthetic and believe it has a certain charm, especially since manufacturers seem obsessed with adopting a thin frame at the expense of thermal efficiency.

On the top portion, the laptop has a lovely brushed aluminium finish and two grooved accents which form a unique sense of style. The dual LED strips add some flair without detracting from the laptop’s sophisticated aesthetic. Saying that, it might be worthwhile to make the strips support the full RGB spectrum instead of a single shade. On a more positive note, the MSI Gaming Dragon logo looks fantastic and the central positioning ensures it’s a key aspect of the laptop’s distinctive appearance. 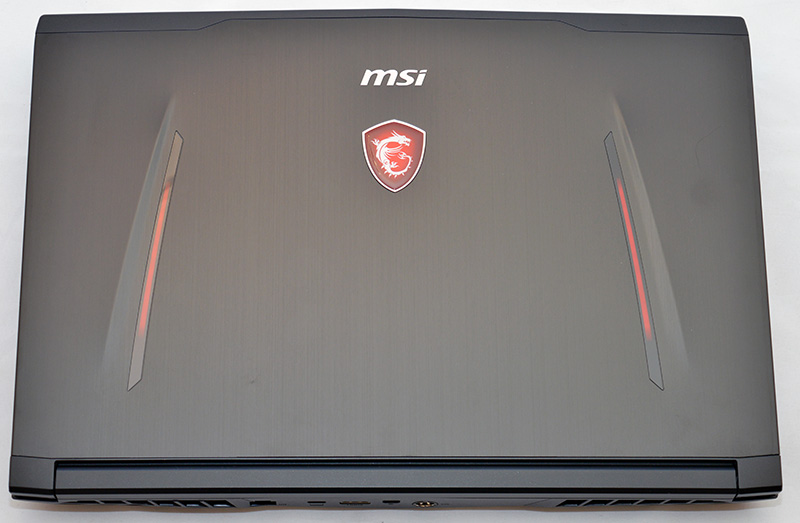 The bottom section is constructed to a high standard from a thick, robust plastic and houses five rubber feet which are secured in place with a strong adhesive. Rather impressively, the feet prevented unwanted sliding even when using an aggressive approach. Therefore, I’m confident that the feet shouldn’t come loose over time and ensure the laptop maintains a solid positioning. As you can see, the bottom cover has a large ventilation area to allow air to pass over the CPU’s and GPU’s direct contact points. There’s also a 3.5-watt subwoofer by Dynaudio which helps the audio to stand out and have a greater tonal response than many rival offerings.

Opening the laptop is a ridiculously simple process and doesn’t require any specialist tools. All you have to do is remove nine Philips screws scattered around the plastic cover, before gently prying it off with a guitar plectrum or similar blunt device. Please remember, one of the screws is hidden underneath a warranty void sticker which means MSI will know if you’ve attempted to open the unit up. On the other hand, I don’t think this will invalidate your warranty if done correctly. The only thing to avoid is snapping the delicate plastic clips which connect the plastic cover to the main chassis. 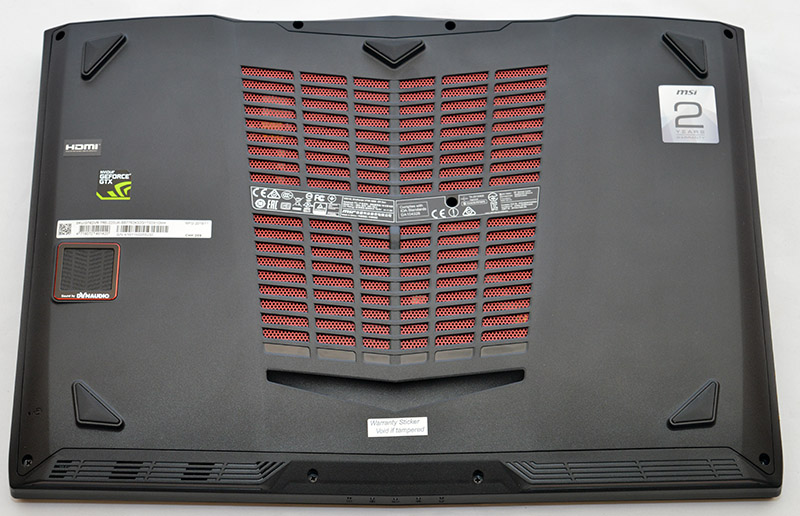 Once removed, we can see the plastic cover’s shape and how it connects to the main chassis using an assortment of clips. The cover contains a cut-out for the battery and grille which slots over the integrated subwoofer. 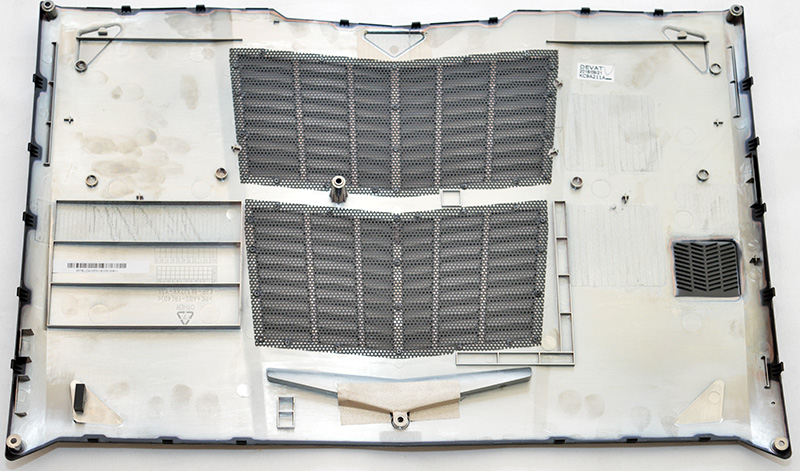 The MSI GT62VR 7RE Dominator Pro’s Cooler Boost 4 technology has a total of seven heat pipes which dynamically cool both the GPU and CPU based on thermal loads. As a result, the cooling hardware is able to maintain impressive frequencies within a portable form-factor and obtain a good noise to performance ratio. The level of engineering which goes into the laptop’s cooling apparatus is nothing short of sensational and the latest version can contend with the new i7-7820HK rather well.

The heat pipes are surprisingly thick and connect to two large fans which export heat from the rear. The fans can function at a wide range of RPM values allow you to prioritise the cooling performance or select another mode which limits the noise output. Of course, this is done in MSI’s software suite. Just like the previous generation i7-6820HK, it’s possible to overclock the CPU, although I wouldn’t recommend it given the thermal restrictions. 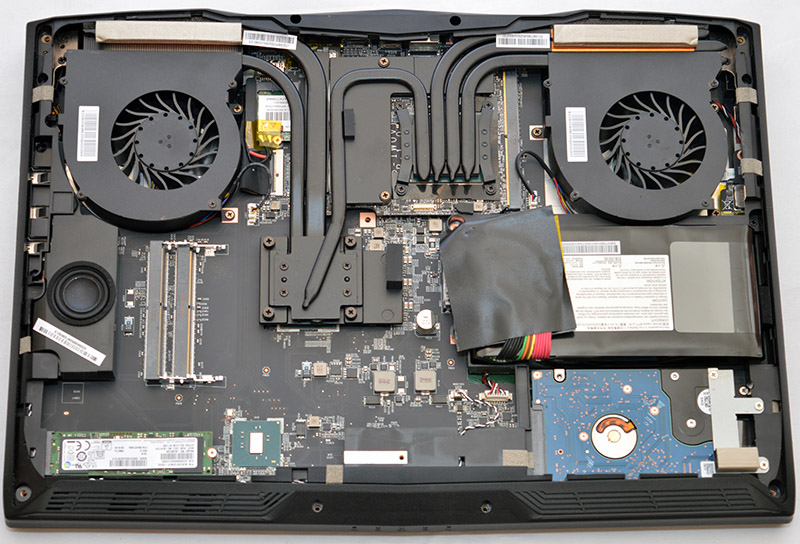 Interestingly, the extra DIMM slots are positioned near the embedded subwoofer and kept away from the cooling hardware. This makes it easy to upgrade the memory at a later date and you shouldn’t encounter any issues accessing the slots. Slightly further down the PCB is the 500GB Samsung MZNLN512HMJP boot drive capable of sequential reads up to 540MB/s and a maximum 520MB/s write rate. Given the laptop’s premium component selection, I expected an NVMe drive to come as standard. Despite this, you can always purchase a different variant with a better boot drive. Also, there’s another slot to fit a secondary M.2 drive and you could pair two devices together to form an RAID0 array. Next to the included M.2 boot drive is the exposed Intel chipset without a heatsink which looks a little strange. Saying that, it doesn’t seem to cause an issue and the plastic cover offers enough protection. 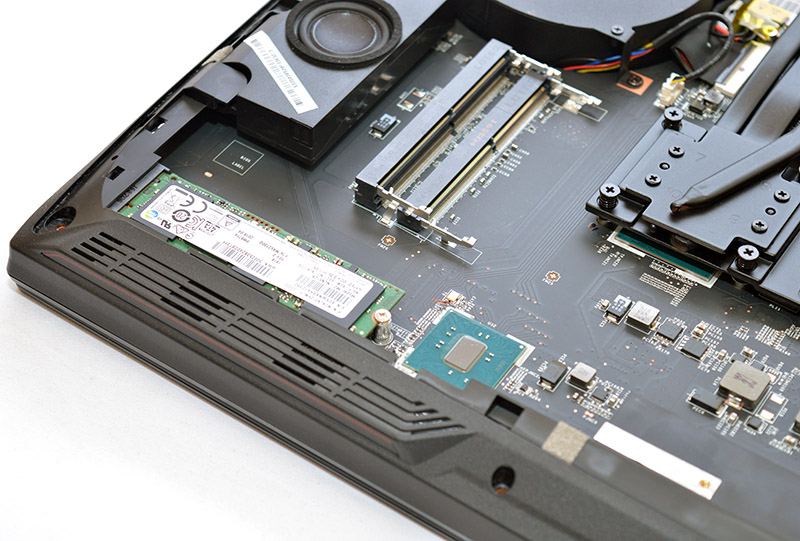 The laptop is bundled with an 8-Cell, 75 Whr battery which takes up a decent amount of room and the cabling is neatly held down with insulation tape. While it’s not the highest capacity battery I’ve ever seen, it should power the unit for a few hours while performing basic tasks such as word processing. Judging from the PCB layout, a larger battery could have been fitted because there’s some space between the cooling block and battery compartment. However, it’s unlikely to dramatically impact on the battery’s longevity per charge. As you can see, a 2.5-inch hard drive is securely mounted below the battery with a metal supporting bar. This minimises vibrations and ensures the HDD doesn’t become dislodged when carrying the unit. 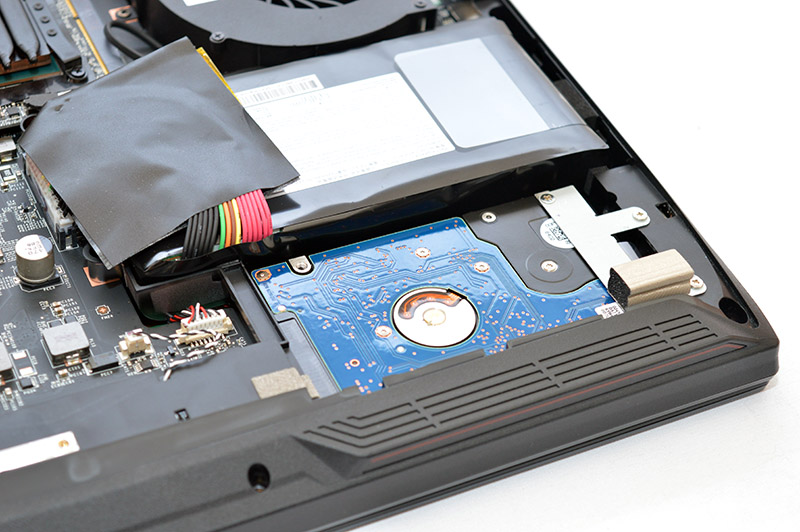 Near the cooling hardware is an M.2 WiFi/Bluetooth module which attaches via a traditional ribbon cable. From this shot, we can appreciate the thick heat pipes and two blocks which make direct contact with the CPU and GPU. 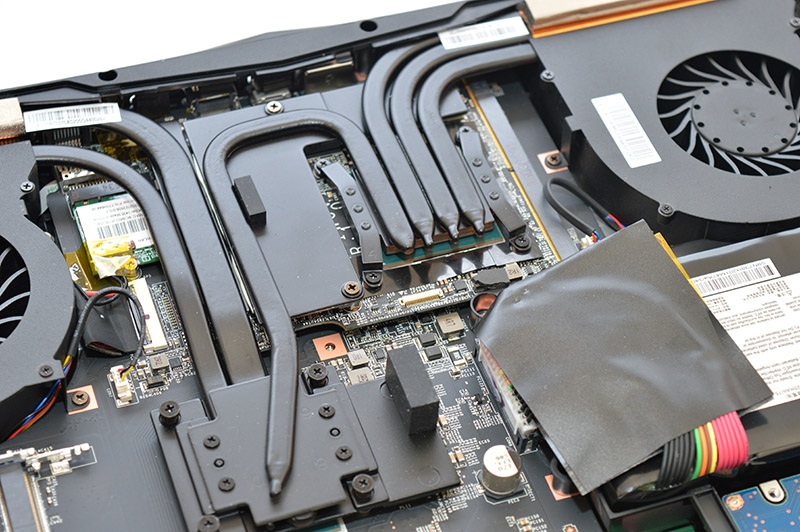 The laptop is equipped with a 15.6-inch 3840×2160 (4K) IPS-level display with a rich colour gamut and vibrant colour palette. As a result, the display has 100 percent sRGB coverage and impeccable 178-degrees viewing angles typically seen on IPS panels. Additionally, the mammoth resolution makes the text look pin sharp and accentuates background details. The display is a joy to use for work, although I’m not entirely convinced it’s the best option for gaming tasks given the GTX 1070’s abilities. Don’t get me wrong, it’s possible to maintain a fluid user experience in some games but the GTX 1070 begins to struggle while driving so many pixels.

Thankfully, it’s easy enough to select lower visual settings and make the frame dips occur less often. Additionally, NVIDIA’s G-Sync technology reduces stutter and gives the impression of a smoother frame-rate during the low to mid-30s. Personally, I would have paired a high-refresh 1440P panel with the GTX 1070 to provide a better experience which doesn’t rely on the end-user tweaking settings on a game by a game basis. 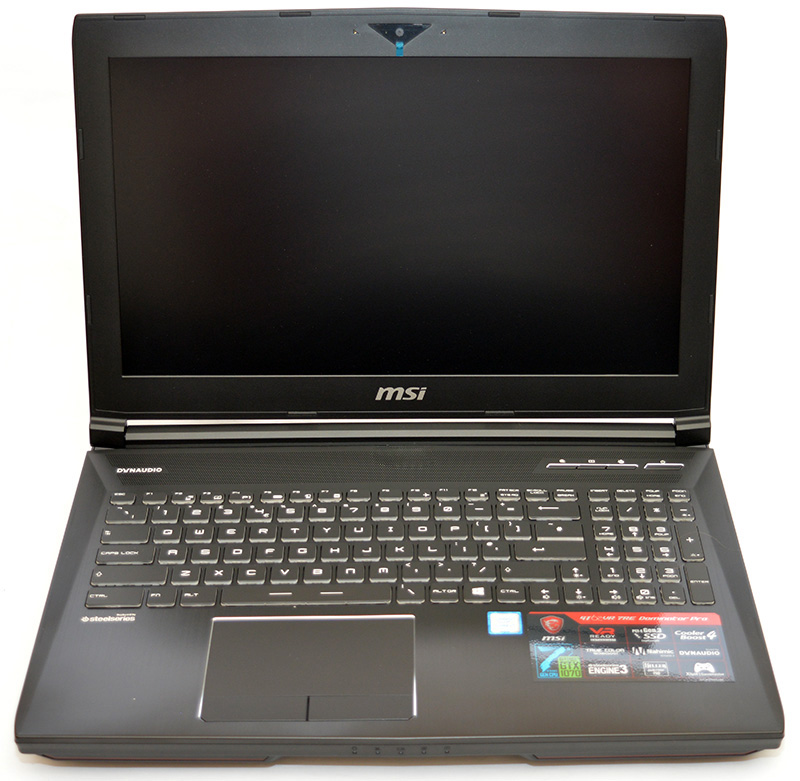 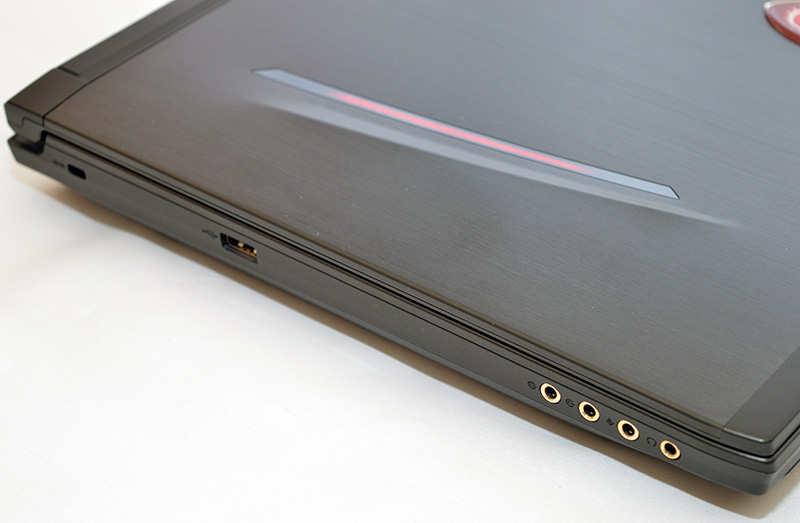 Switching to the other side, we can see the SD card reader and three USB 3.0 Type-A ports. 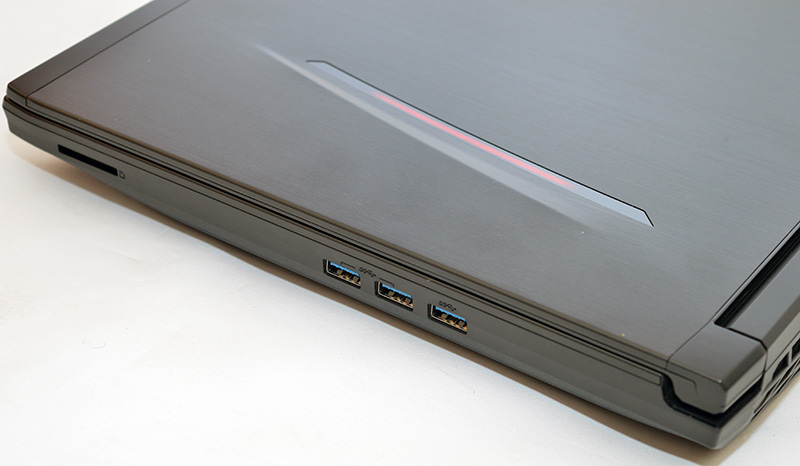 At the back, the end-user is provided with an RJ45 port, USB 3.1 Type-C, HDMI, Mini-DisplayPort and connector for the 230-watt power adapter. The laptop’s wealth of ports allows you to hook up two external displays simultaneously and enjoy 4K content on a large Television. To enhance airflow, there are two large vents which prevent the internal components from heating up in a rapid fashion.

The MSI GT62VR 7RE Dominator Pro has dual 3-watt speakers and a 3.5-watt subwoofer which combine to deliver a rich, balanced sound at high volumes. According to MSI, the laptop’s Dynaudio speakers exhibit a 50 percent amplitude boost over the previous generation which results in a volume improvement over 10dBA. Of course, laptop speakers tend to sound overly flat due to the restricted space and it’s important to have realistic expectations. Throughout my time with the laptop, I was impressed with the audio fidelity and didn’t instantly rush to use a pair of premium headphones. The subwoofer helps to give the audio a more vibrant tone and I didn’t detect any irritating speaker hum.

As per usual for MSI’s gaming laptop range, the keyboard is based on a chiclet design to encourage you to adopt an ergonomically-friendly posture. The keys require 1.9mm of travel which provides a pleasant tactile feedback while being easy enough to press during intense gaming marathons. On another note, the keys have a matte finish and resist dust, grease and fingerprints rather well. The trackpad is another highlight and responds to user commands in a seamless manner. Additionally, the large surface area makes it easy to traverse the high-resolution screen and accurately select small corners during photo editing and other precise tasks. The buttons have a satisfying click when pressed and don’t require too much pressure to actuate. 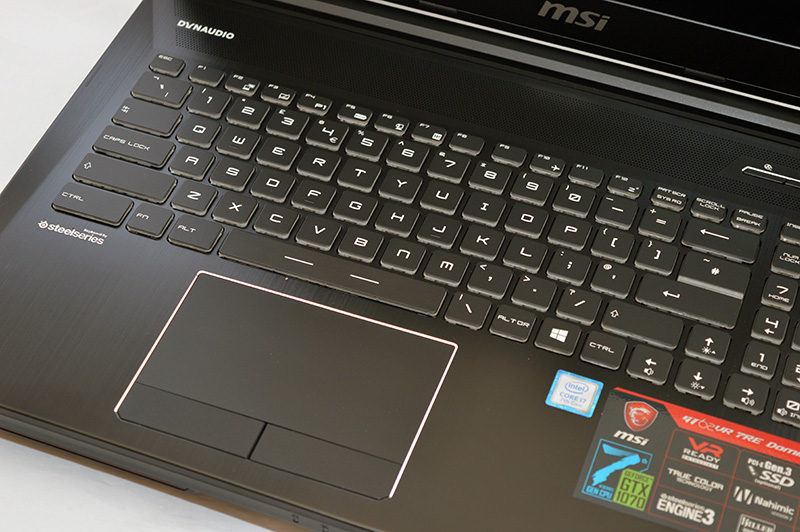 Here we can see the laptop contains dedicated buttons to adjust the fan profile, access media features and customise the keyboard’s lighting. The hinge is engineered to an extraordinary standard and stops screen wobble from taking place. 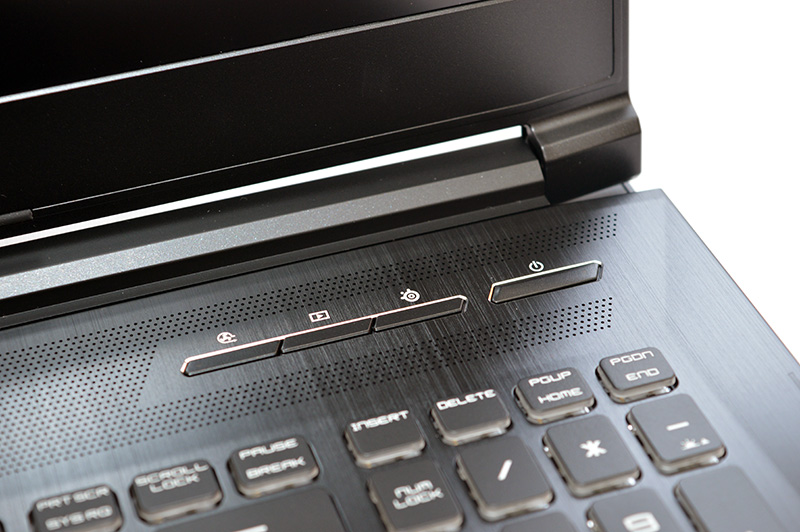 MSI’s Silver Lining Print allows the full RGB spectrum to be easily seen across various brightness levels and protects the lettering from fading over time. As a result, the lighting should look extremely vibrant and pierce through the key caps. 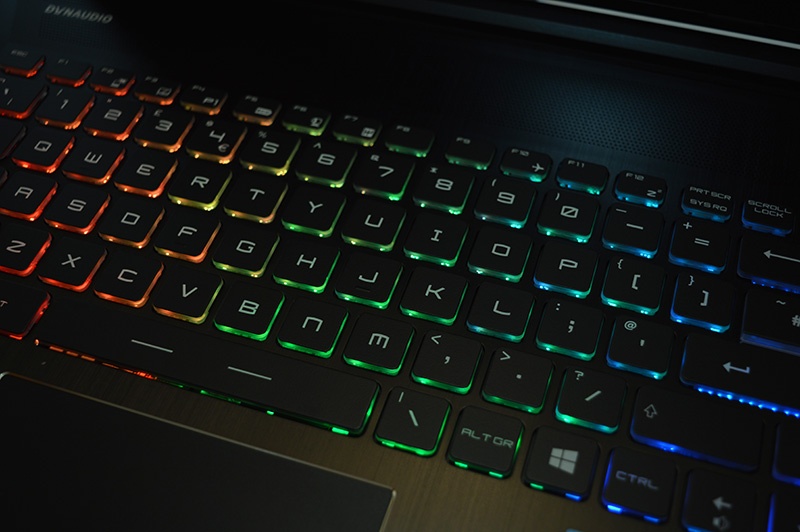